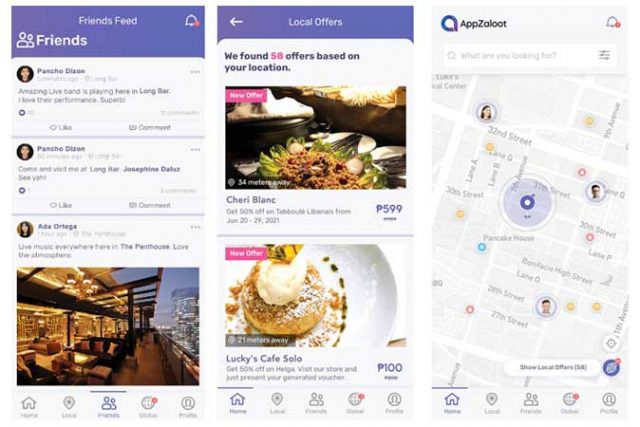 RECEIVING notifications when not using social media and being required to submit specific information for a personalized feed determined by algorithms may be difficult for users nowadays.

“I can go and search something because I’m interested in that particular thing. And the next minute I go onto social media, and I’m being pushed all these ads about it. So that’s sort of something that really annoyed me,” businessman Max Thomas said.

To avoid this problem, Mr. Thomas founded and developed the social media app AppZaloot in 2016 which uses location-based technology. The app currently available to users in Europe, Southeast Asia, and Asia-Pacific.

“If you went from Manila to Cebu City, as soon as you get off at [Mactan-Cebu International Airport] and turn the app back on, your radius immediately comes up with everything that surrounds you on Mactan Island,” the AppZaloot founder and CEO said as an example, during the online press launch on May 26 held via Google Meet.

APP FEATURES
AppZaloot is equipped with a user-driven “data social responsibility.” According to Mr. Thomas, the app does not collect data without the user’s consent, which will allow them to use the platform without worrying about their privacy being compromised.

“We understand that most people don’t want to have their data used by social media companies, regardless if the data will be used for good intentions such as creating targeted ads and personalizing their feeds to enhance their social media experience,” Mr. Thomas said in a press release.

AppZaloot has three social feeds: the Private Friends’ Feed, Local, and Global. The Private Friends’ Feed allows the user to connect with friends on the app; the Local Feed allows interaction among users within a set radius (up to 25 kilometers) in the community; and the Global Feed allows the user to publish posts and to view posts from around the world. The difference with other social media platforms is that it has no advertisements.

Services such as shops, restaurants, entertainment that appear on the app are those within the radius the user has set. This feature aims “for local businesses to have a platform to promote themselves to people in their local community,” according to a video presentation during the launch.

The app also has an Emergency Alert System for notifications from relevant authorities such as weather updates, public transportation disruptions, and traffic accidents within the area where the user is located.

The app also has a private messaging and join/create group chat feature.

The AppZaloot team said it is preparing to launch its own crypto tokens called Zaloots, the pre-sale of which will be available by the end of June. The Zaloots token will be tradeable on several international decentralized crypto exchanges. It will also be eventually integrated into AppZaloot’s upcoming loyalty program, as well as used on the app for payments and rewards.

“We know we still have a lot to do. And whenever you launch an app like this, you never ever finished developing. You are always going to improve things. You’re going to take feedback from your users, you’re going to adjust things, we’ll be uploading changes all the time,” Mr. Thomas said.

Back to square one: When big economies will hit pre-virus GDP