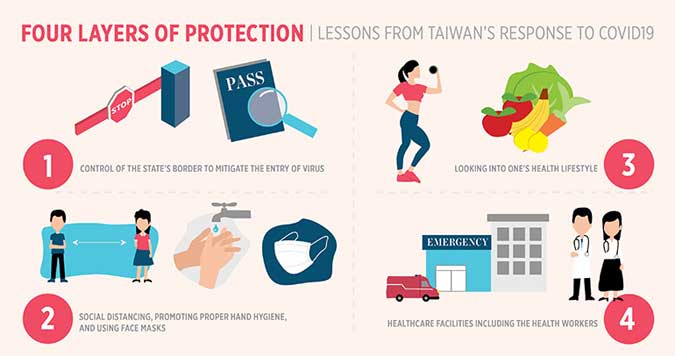 Taiwan is highly recognized for its quick and efficient response to the coronavirus disease 2019 (COVID-19) disease when it rapidly spread in China last January. Learning from the difficulties and losses experienced during the severe acute respiratory syndrome (SARS) outbreak of 2003, Taiwan was seen by the global community taking the COVID-19 outbreak very seriously by ramping up domestic face mask production and utilizing digital technology, among other measures.

With 429 cases and only six deaths as of April 27, Taiwan has become one of the countries that other states are beginning to learn from as the world fights this pandemic.

An opportunity to learn from the country came last April 24 when the Asian Institute of Management kicked off its webinar series about best practices from selected countries in their fight against COVID-19. For the webinar’s first iteration, speakers from Taiwan shared their experiences in dealing with the disease.

Starting her talk, Dr. Ho pointed out that since they realized that the pandemic cannot be eradicated with the available control measures, preventing a surge of patients that would inundate the healthcare system is the key.

Regarding the length of the pandemic’s duration, she stressed that “technically when the sufficient proportion of population possess immunity, the transmission of the disease will slow down or will be halted.”

Under this context, she further stressed that “the proceed of natural infection among [the] population would be made very slow” without any vaccine or effective antiviral drug curing the disease. Until then, states should prepare for a “long-lasting” kind of pandemic.

At the first level, there should be control of the state’s border to mitigate the entry of the virus.

The third level, on the other hand, has to do with mitigating the severity of illness whenever one gets the virus.

Expounding further on this level, Dr. Ho emphasized that one’s health behaviors and lifestyle could contribute to the level of contracting the disease.

For Dr. Ho, looking into one’s health lifestyle is one of the ways to reduce the risk of having a severe type of the disease.

“Personal behavior may reduce the exposure and infection probability. Other host metabolic states or health states may determine whether they would have severe or asymptomatic cases,” she added.

Highlighting the need for adequate supply to protect health care workers and outdoor triage of potentially infected patients, Dr. Ho finds that they should carefully think of cost-efficient ways to allocate their resources.

She also advised that facilitiescalculate surge capacity, including the human resource of healthcare workers, as well as setting alternative plans to expand it.

Moving forward to Taiwan’s measures, Dr. Ho pointed out that setting border controls in the state is one of the country’s very early actions.

Responding to the first reported case of COVID-19 from Wuhan last Jan. 21, Taiwan banned non-essential travel and direct flight to Wuhan, and it also prohibited entry of Chinese individuals from Wuhan.

More stringent measures were applied in succeeding months, when the entry of people from China as well as the docking of cruise ships were prohibited. Flights to China were also stopped except for 5 airports, while all inbound travelers, regardless of nationality, were quarantined for 14 days with a daily compensation amounting to 35 US$.

Dr. Ho also noted that contact tracing was done respectively along with the quarantine measures. Digital tracking of location, along with a sufficient number of investigators comprising of central and local government employees, has made contact tracing much easier.

Building trust among citizens has also been very helpful as Taiwan combats COVID-19, Dr. Ho stressed. The state’s transparent information drive include a daily briefing to keep the public well-informed; the use of a digital platform to counter fake news, misinformation, and disinformation concerning the pandemic; and implementing tough penalties for disseminating fake news or disinformation.

Dr. Ho also pointed out Taiwan’s transparent policy to fairly distribute surgical masks “to build the sentiment that we are all on the same boat together”.

Aside from prohibiting the exportation of surgical masks, the government also granted the private industry to increase production capacity.

Moreover, domestically-produced masks were requisitioned and sold at a set price. To help citizens in purchasing, an app was created to indicate the stock of masks available in drug stores.

While Taiwan is successfully handling the pandemic, Dr. Ho noted, an opportunity still lies to find better tools to combat the disease, such as quick and accurate diagnostics, antivirals, and the long-sought vaccine.

Taipei’s strategy
Sharing experiences on a local scale, Tai-Chu Chou, spokesperson of the Taipei City Government, finds it very beneficial for other countries to learn from the experiences of Taiwan.

“If we want to recover our normal life [and] to enjoy our economic growth, we should walk together. We are on the same boat,” Mr. Chou said, emphasizing that experience sharing and learning is important “to strengthen the capability of the world to fight against this vicious virus”.

Under the city government’s strategies, according to the spokesperson, strict internal controls were implemented, among them monitoring individuals under home quarantine, which he regards as their most important internal control.

“One very creative measure by our Taipei government is that we provided a smart checking system to make sure those individuals would stay at the hotel or their residences,” Mr. Chou said.

When asked for recommendations on how the Philippines can harness digital technology for better contact tracing, Mr. Chou said that getting people’s confidence in the government is key to effectively apply such technologies.

He also found the increased production and use of face masks as another important facility for cutting off the spread of COVID-19 in the area.

Advanced deployment of measures, as implemented by installing isolation institutions, is also under Taipei’s strategy.

Valuing the economy as much as epidemic prevention, Mr. Chou continued, Taipei implemented strict health management measures in businesses instead of closing them down. Economic relief measures, such as those involving rent and subsidies, are also rolled out.

“We should not finish all of our bullets in the first phase because more enemies may come our way,” Mr. Chou illustrated.

Sharing of experiences was also included in the strategy, as the spokesman noted that shutting down countries and cities should not last forever. “Success relies on global cooperation,” he noted.

Aside from the city’s strategy and creative measures, for Mr. Chou, the country’s advantages also play a big role in mitigating COVID-19’s spread.

He pointed out the country’s ‘superior’ national health insurance system, aside from its more than 20,000 hospitals and clinics.

“Most of the clinics in Taiwan can provide a walk-in service so that people don’t have to wait,” Mr. Chou noted, adding that such services get nearly 90% satisfaction ratings from patients.

He also stressed the country’s learned lessons from the SARS outbreak. “We paid a very heavy price. This explained why when coronavirus happened in China, early this year, our government took a very swift and effective measure to contend the virus,” Mr. Chou said.