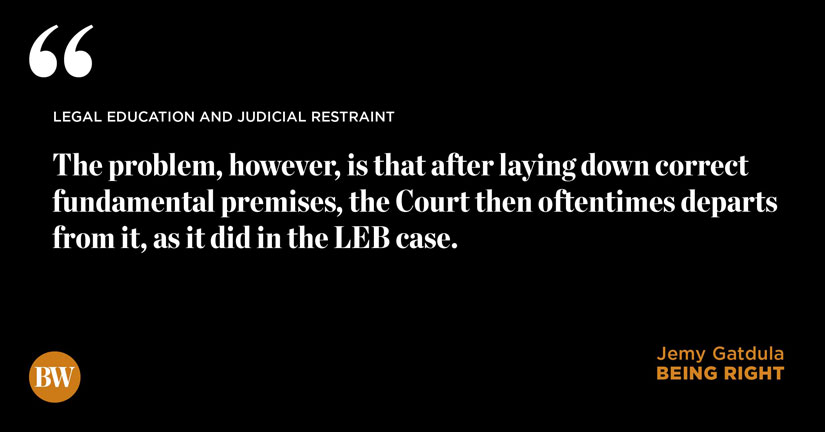 One thing certainly needing removal should changes in the Constitution again come up is the “grave abuse of discretion” review powers of the Supreme Court.

With the Constitution’s Article VIII.1, the Supreme Court can invalidate an act of Congress or Executive if the Court finds it a “capricious or whimsical exercise of judgment” or if the law or act is unfair, unjust, or contrary to reason, or if such was enacted in an “arbitrary and despotic manner by reason of passion and hostility,” and to replace such law or act with a measure the Court finds acceptable.

The problem is it was never made expressly clear who or what standard is determinative of what constitutes reasonable, logical, or non-arbitrary. Does such standard emanate from the collective wisdom of the Court? But such would be inherently malleable; hardly a standard at all. The results we see in our jurisprudence. It can also be myopic, considering that membership to the Court is limited to lawyers and (as recent practice indicates) only those coming from within the judiciary.

The point is that the Court was not designed to dwell on policy matters but merely the legal. In the recently concluded case of Pimentel vs. Legal Education Board (LEB), the Supreme Court gratifyingly says exactly that.

It even goes on to say: “The words of the Constitution are understood in the sense they have in common use. What it says according to the text of the provision to be construed compels acceptance and negates the power of the courts to alter it, based on the postulate that the framers and the people mean what they say.”

Which is really an appropriate way of interpreting the Constitution, far better than treating it as a “living document” or other such nonsense.

The problem, however, is that after laying down correct fundamental premises, the Court then oftentimes departs from it, as it did in the LEB case.

Take the Same Sex Marriage case, where the Court rightly upheld the importance of judicial hierarchy. And yet the LEB case sees the Supreme Court impliedly reverting to “transcendental importance.”

And when faced with the utterly simple language of RA 7662, Section 7.e (the powers of the LEB include: “to prescribe minimum standards for law admission and minimum qualifications and compensation to faculty members”; that provision to be read within the context of the Constitution’s Article XIV.1, .2.1, and .5.2.), it thereafter constructs indecipherable principles of mysterious legal foundations.

The LEB’s issue essentially is that, under the aforementioned legal framework, it decided to limit law school admission only to those students attaining a grade of 55% in the PhiLSAT (Philippine Law School Admission Test). It also threatened to penalize law schools not complying with the LLM (Masters of Law) requirement (with certain exceptions) for faculty members.

The Supreme Court’s primacy in interpretation is limited only with regard to cases before it and logically should also be limited in line with the general and overall duty of everybody else to interpret the Constitution.

If the Congress used its discretion with regard to policy and its mandate to interpret the Constitution in accordance with its function to make laws, then it behooves the Supreme Court to exhibit restraint and respect Congress’ act.

Otherwise, legal complexities result when there shouldn’t be: yes, apply the PhiLSAT but don’t prohibit law school admission to students with a PhiLSAT grade below 55%; or, yes require LLM’s but don’t sanction law schools for not complying.

What principles are there in the Court’s reasoning that can guide our citizens in the future? Academic freedom? But the Court itself admits such is not absolute. Also, law faculties remain relatively free to teach what and how they want.

Does the Court want to limit the LEB to a ratings body, categorizing law schools as to quality? That may be good but is that what Congress wanted? Remember: Congress is the co-equal branch of government tasked with legislation, not the Supreme Court. And so long as equal protection and due process is complied with, nothing in the Constitution’s text restrains Congress from regulating who enters law school or teach therein.

The Supreme Court’s LEB ruling leaves a lot more to be unpacked. But for now, take note that the PhiLSAT only began implementation on April 2017 for schoolyear 2017-2018. The LLM requirement was around that time as well. None of the PhiLSAT students have taken the Bar. We therefore simply have no data if, given the chance, the LEB’s measures benefit or not the legal profession and the country as a whole.

Hence, why judicial restraint and judicial hierarchy, seemingly restrictive, are still laudable principles worth adhering to.