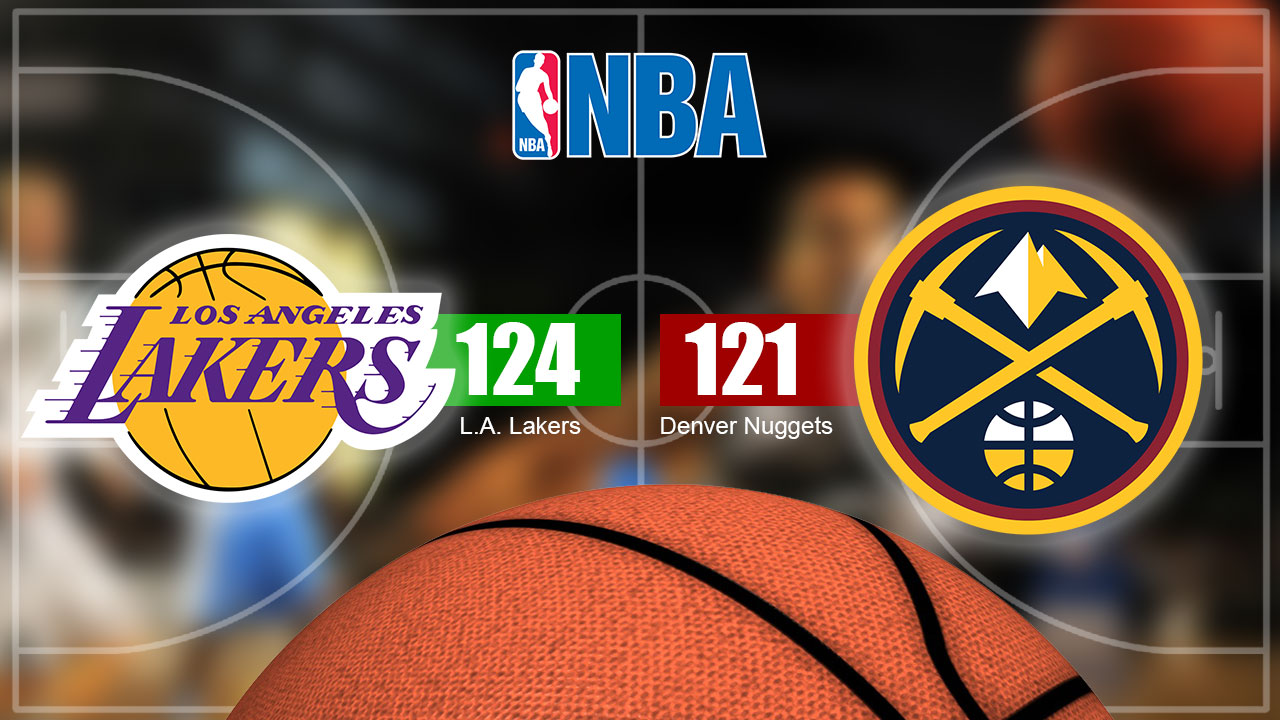 KYLE KUZMA’S 3-pointer with 0.4 second left lifted the Los Angeles Lakers to a 124-121 victory over the Denver Nuggets on Monday night near Orlando.

LeBron James had 29 points and 12 assists for the Lakers, who snapped a three-game losing streak. Anthony Davis finished with 27 points, and Kuzma contributed 25.

Reserve guard PJ Dozier had 18 points to lead the Nuggets, who had eight players reach double figures. Michael Porter, Jr. had 15 points on 6-of-6 shooting, including 3-of-3 on 3-pointers. Jamal Murray had 14 points, Paul Millsap scored 13 and Nikola Jokic chipped in 12 for Denver.

The Nuggets rested their starters for much of the fourth quarter, and the loss left them 1 1/2 games back of the Los Angeles Clippers for the no. 2 seed in the Western Conference with two games remaining. The two teams meet Wednesday.

RAPTORS 114 – BUCKS 106
Chris Boucher had a career-best 25 points to go with 11 rebounds, and Toronto defeated Milwaukee for the first time this season as both teams played without key players.

Matt Thomas added a career-best 22 points for the Raptors and Norman Powell had 21 points and eight rebounds. Pascal Siakam added 14 points for Toronto.

Booker, who sat out the fourth quarter, notched his 90th career 30-point game and tied Suns legend Walter Davis for most 30-point games in franchise history. Mikal Bridges and rookie Cameron Johnson added 18 points each for the Suns, who have won all six seeding games in the bubble and remain in the thick of the race for a postseason berth.

Darius Bazley’s 22 points and 10 rebounds led the Thunder. Oklahoma City, which lost a 15-point lead in the first half, has already clinched a playoff spot and is 3-3 in the bubble.

MAVERICKS 122 – JAZZ 114
Tim Hardaway, Jr. led Dallas with 27 points and Seth Curry added 22 to lead the Mavericks to a victory over Utah.

Boban Marjanovic added 20 points and nine rebounds and J.J. Barea chipped in 18 for the Mavericks, who rallied from a 22-point deficit.

Jordan Clarkson scored 18 points to lead Utah. Rayjon Tucker added a career-high 17 points while Emmanuel Mudiay added 14 and Georges Niang chipped in 13 for the Jazz, who blew a late double-digit lead for a second straight game.

HEAT 114 – PACERS 92
Jimmy Butler, returning from a three-game injury absence, had game highs with 19 points, 11 rebounds and four steals to lead Miami past Indiana and into sole possession of fourth place in the Eastern Conference.

Butler, who also had five assists in 29 minutes, had been out with a sore right foot. The teams were tied at halftime, but the Heat led by as many as 18 points in an explosive third quarter and cruised from there, cooling off Pacers star T.J. Warren along the way.

Warren entered Monday as the league’s top scorer in the restart, averaging an impressive 34.8 points on 60.5% shooting from the floor and 55.6% on 3-point attempts. However, Miami held him to 12 points on 5-for-14 shooting, including 2-for-6 on 3-point attempts. Victor Oladipo led Indiana with 14 points. — Reuters