DONOVAN Mitchell scored 36 points as the Utah Jazz extended their winning streak to five games with a 136-104 victory over the Minnesota Timberwolves on Wednesday in Minneapolis.

Bojan Bogdanović added 21 points, Jordan Clarkson fired in 18 off the bench and Rudy Gobert contributed a double-double of 13 points and 10 rebounds in the win. Mitchell has scored 30-plus points in four straight games, tying his longest such streak.

The Jazz outscored the Timberwolves 76-45 in the second half to hand Minnesota its fourth loss in a row. Utah drained 25 of 54 3-point attempts, led by Clarkson (six treys), Mitchell (five) and Bogdanović (four). 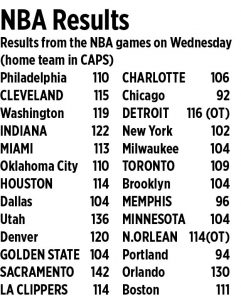 The Jazz seized control in the third quarter after a tight first half.

Towns powered the Timberwolves back within eight after the Jazz took their largest lead, 97-81. But Utah responded with an 8-1 run to go ahead 107-92.

Minnesota took a time out at that point, but it just got worse for the home team as Utah exploded for a 14-0 run to turn it into a rout.

The Jazz held a one-point lead after a back-and-forth first quarter and then again at half time. But there were some wide momentum swings getting to that 60-59 lead at the break.

The Timberwolves then took advantage of a four-minute drought for Utah. Edwards drained a pair of deep shots and Naz Reid scored four as Minnesota cranked out a 12-0 run to regain the lead, 51-49.

Bogdanović then went on a personal 7-0 run to put Utah back up by four. After Minnesota responded with a 6-1 spurt, Mitchell hit a shot with 13.4 remaining to end a wild quarter.