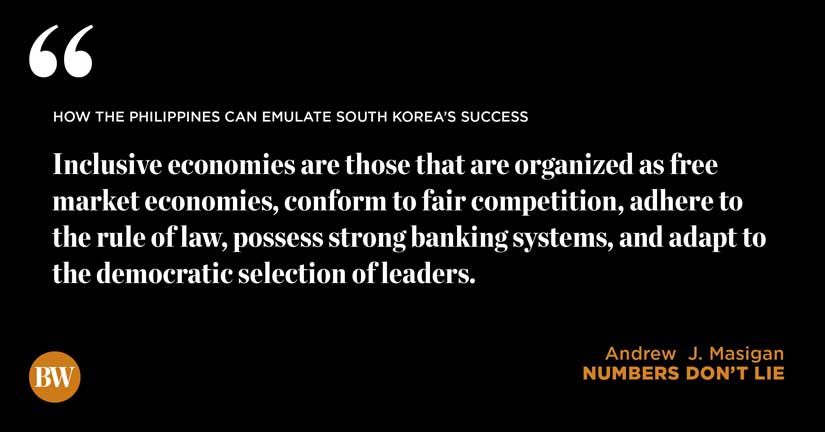 On Aug. 15, 1945, Emperor Hirohito announced Japan’s surrender following its invasions of countries in the Asia Pacific region. Its colony in Korea was divided into two spheres, with the south administered by the United States and the north by Russia. The two Koreas existed with tension between them and this culminated in June 1950 when the North invaded the South. The two Koreas have been at war ever since.

The South embraced free trade, economic deregulation, and privatization under the leadership of Harvard-educated statesman, Syngman Rhee. Rhee served as the nation’s President from 1948 to 1960. Rhee and his equally successful successor, Park Chung Hee, shaped South Korea’s institutions and legal system into one conducive to capitalism. They established a strong legal system where property and human rights are upheld. They invested in education. They even went so far as to provide credit, subsidies, and lucrative contracts to certain companies who blazed the trail for the country’s rapid industrialization. Called chaebols, the likes of Hyundai and Samsung invested billions in highly technical industries that would serve as the backbone of the South Korean economy. These included steel mills, petrochemical plants, and high precision electronic factories.

The situation was different in the north. Kim Il-Sung established himself as the country’s dictator in 1947 with the help of the Soviet Union. He organized the North Korean economy as one that was centrally planned and controlled in accordance with the so-called Juche System (where self reliance is the core principle). In Kim Il-Sung’s world, ownership of properties were outlawed, free markets were banned, and freedoms were curtailed in all aspects of life. The citizens received only basic education with emphasis on the country’s propaganda. Like a monarchy, Kim Il-Sung’s descendants became his successors, all of whom subscribed to the same Juche System.

Decades later, South Korea evolved into an industrial powerhouse and a leader in numerous high-technology industries including computer manufacturing, robotics, and telecommunications. It is the 12th largest global economy today and its citizens enjoy the same standard of living as the people of Spain and Italy. In contrast, the North Korean people are starving, literally. Their industrialization failed and their agricultural sector survives on a hand to mouth basis. The living standards of the North Koreans are similar to the people of Somalia. Worse, life expectancy of North Koreans is 10 years less than their southern relatives.

From being one and the same nation just seven decades ago, the two Koreas have become stark opposites of the other. How did this happen?

According to economists Daron Acemoglu and James A. Robinson, the manner in which the laws and institutions of a nation are organized largely dictates whether a nation succeeds or fails. Successful nations are those that encourage economic participation by the masses to make the best use of their talents. It is one where no one from the political or business elite have undue advantages over the rest. Successful nations have inclusive economies and they foster economic activity, productivity, growth, and prosperity.

On the other hand, unsuccessful nations concentrate power among a narrow elite who enrich themselves at the expense of the masses. This model is called an “extractive economy.”

Inclusive economies are those that are organized as free market economies, conform to fair competition, adhere to the rule of law, possess strong banking systems, and adapt to the democratic selection of leaders.

A free market situation provides incentives for the people to work hard, to invent, to innovate, and to become efficient. By doing so, they are able to grow their businesses and enrich themselves. This, in turn, triggers a snowball effect of job generation, productivity, and increased revenues for government by way of taxes.

In countries like North Korea and Cuba where markets are controlled by their governments and where the ownership of private property is prohibited, its citizens have little incentive to invest or exert effort to increase productivity. They do not bother to hustle or toil as doing so will not make a difference in their lives. The stifling regime represses innovation and douses the entrepreneurial spirit with cold water.

Fair competition and an even playing field is another ingredient to a nation’s success. When governments disrupt the free market by coddling monopolies, giving preferred treatment to certain individuals, increasing barriers to entry, or demanding payola from private companies — all these prevent real competition from taking place. It makes the dominant player even more dominant but also more inefficient. This inefficiency translates to higher costs for the consumers and, more often than not, to poor service. While the dominant company can boast of scandalous profits, it is usually unable to hold up against with competition from abroad.

On the other hand, when corporations are allowed to compete on an level playing field, the entire industry becomes efficient. The company that emerges as the dominant force is the one that is more outstanding than the rest in terms of innovation, creativity, and capability. It will be in the position to conquer foreign markets.

The ability to uphold the rule of law is another characteristic of successful economies. The law is the great equalizer. All citizens, and especially government, must respect the rule of law as without it, chaos, mayhem, and/or human rights violations ensue. Private enterprises must be able to rely on the rule of law when certain forces (like government or politicians) try to disrupt free market forces or when injustice occurs. The rule of law puts order to free trade. It protects corporations and it does so by allowing due process to take its course.

A strong banking system is another prerequisite. Great ideas and a strong entrepreneurial spirit means nothing without the funds to turn concepts into something concrete. Successful economies have strong banking systems to support large conglomerates and humble entrepreneurs alike. The more banks of good standing in an economy, the better. In Singapore, there are 205 banks to support its population of 5.12 million. In Uganda, only 25 banks service a population of 52.86 million. No surprise, Singapore has become a preferred destination to do business. Banks also help increase the savings rate of a country.

The ability to change a nation’s cast of leaders through a democratic election is fundamental to keep the country on a steady road to improvement. Term limits discourage the abuse of power from incumbents; it encourages politicians to do good so as to leave a good legacy; it leaves them less time to delve into corruption; it gives others the opportunity to serve and infuse fresh ideas; it limits the amount of favor trading in government.

Countries vary in their economic success because they are organized differently. The Philippines is a work in progress. While our constitution is set up in way that encourages a free market, certain provisions still give extra privileges to the elite. I personally find it suspect that foreigners are prohibited from investing in infrastructure projects, mass broadcasting, and public utilities. It reeks of protectionism of interests of certain elite families.

If the Philippines is to go the way of South Korea, it must fully deregulate its investment climate and allow foreign investors full participation. It needs an earnest reform of the justice system, and it should break down political dynasties. If we do this, there is no reason why the Philippines cant be the next industrial powerhouse like South Korea.