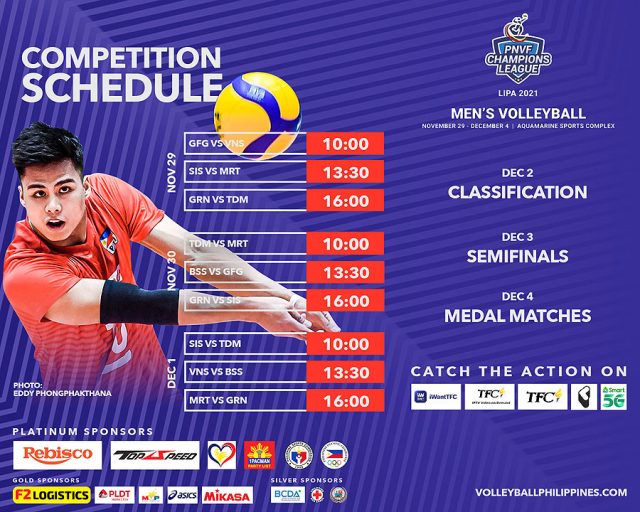 LIPA CITY — After women’s teams last week, the finest men’s clubs in the country bannered by heavy favorites Go For Gold-Air Force Aguilas take their turns today when they slug it out for the inaugural crown of the Philippine National Volleyball Federation (PNVF) Champions League at the Aquamarine Recreational Center Gym here.

Go For Gold-Air Force, made up of a slew of national team players, troops into battle at 10 a.m. against the Manileño Spikers for the curtain raiser of the triple-header opener also featuring Sabong International Spikers against MRT-Negros at 1:30 p.m. and Global Remit against Team Dasma Monarchs at 4 p.m.

Basilan Steel Spikers Amin-Anak Mindanao are also in the fray, making their debut against Go For Gold-Air Force tomorrow.

Go For Gold-Air Force, Basilan and Manileño compose Pool A while Global Remit, Sabong International, MRT-Negros and Dasma make up Pool B with the top two squads from each group advancing to the crossover semifinals.

Ace spiker Bryan Bagunas, too, was supposed to be part of the stacked squad under the tutelage of mentor Dante Alinsunurin if not for his ongoing campaign in the Japan V.League.

But their counterparts are unfazed by the challenge with a vow to give the Aguilas a run for their own money.

“This might be our first tournament as a volleyball club but our players are experienced so expect tough and exciting games from us. We will give our best in each game,” said Steel Spikers team manager Dr. Arnel Hajan, who is also the PNVF vice-president.