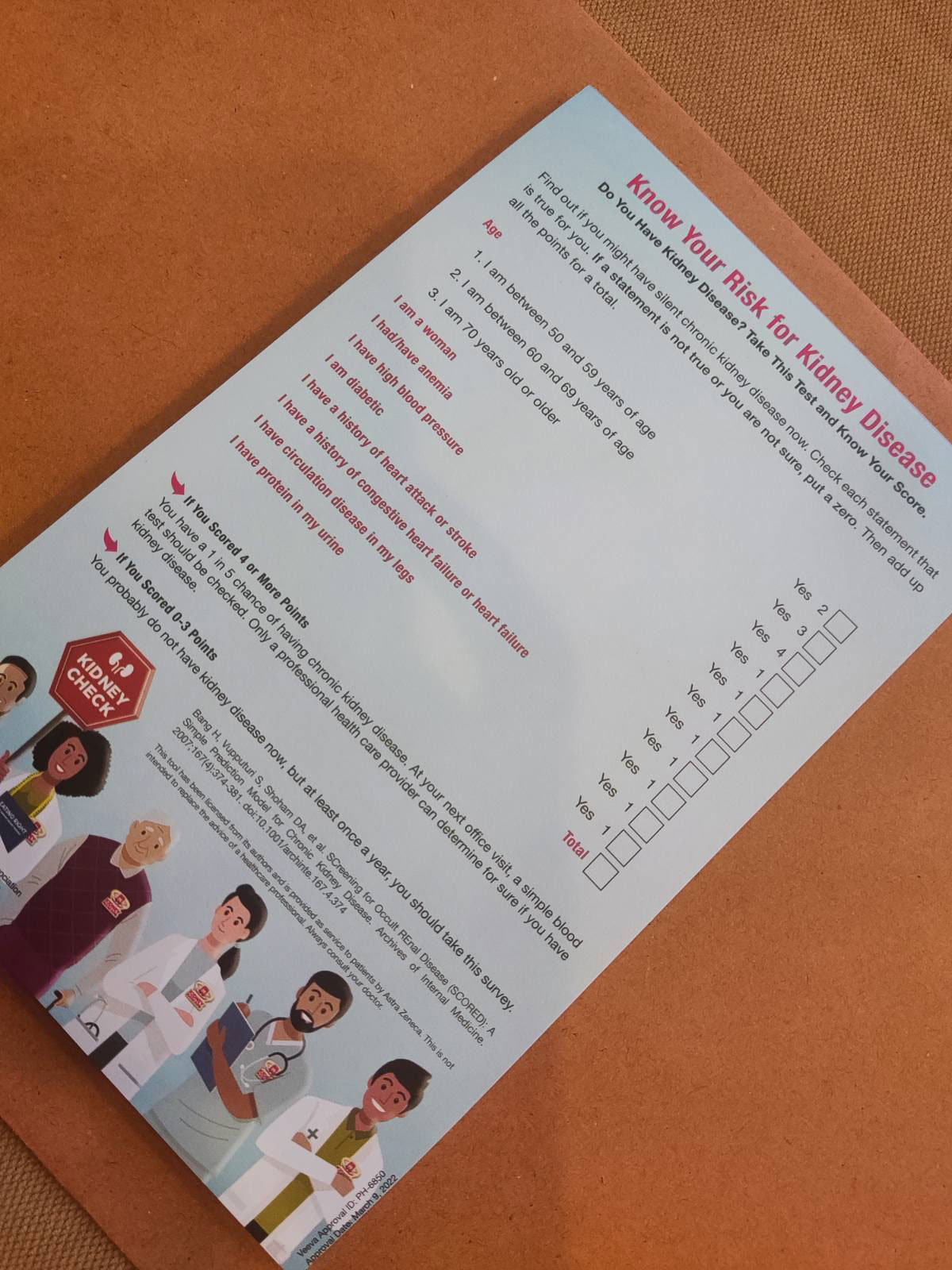 ASTRAZENECA Philippines and MedAsia Medical Products Corp. have signed on June 24 an agreement to broaden access to urine albumin-to-creatinine ratio (uACR) machines, which detect how much albumin is present in the urine.

Albumin, a protein found in the blood, can be an early sign of chronic kidney disease (CKD) if there is more than 30 mg/g of it in a patient’s urine.

The uACR test, which can be done in doctors’ offices, hospitals, or diagnostic clinics, requires a lab sample of about two tablespoons of urine, and may be taken once a year.

“CKD is highly underdiagnosed,” MedAsia general manager Oliver L. Lim said in a statement. “Now that our uACR machines are more accessible to patients, we are committed to helping AstraZeneca Philippines and the medical community in addressing the root of the problem.”

In the same press release, Jo Feng, senior vice-president of AstraZeneca Asia Area, said, “By working in partnership throughout the entire patient care pathway, I hope we can tangibly improve CKD patient outcomes and support our healthcare systems for many years to come.”

“We plan to make it more available in the barrios and in the clinics of primary care physicians so they can test patients right away,” added Mr. Lim in a June 24 event organized by AstraZeneca Philippines.

One Filipino develops CKD every 40 minutes, per the National Kidney and Transplant Institute. CKD was the fourth leading cause of death in the Philippines in 2019, up from the sixth leading cause a decade earlier.

About 59.3% of CKD patients worldwide are undiagnosed because they develop symptoms of kidney disease late into the disease, said Dr. Elizabeth Lapid-Roasa, a consultant of both the University of Santo Tomas Hospital and St. Luke’s Medical Center Global City.

Symptoms such as swollen feet and shortness of breath happen usually at stages 4 or 5 — “when you’re almost needing dialysis or requiring a transplant already,” Dr. Roasa said. The second reason for the underdiagnosis is because people are not aware of their potential to become sick, she added.

Patients with diabetes, high blood pressure, heart disease, and high cholesterol are at risk for CKD. So are those who smoke and are obese.

The term CKD refers to a conglomerate of diseases, according to Dr. Nickson E. Austria, head nephrologist of Calamba Medical Center. While certain types may manifest early in life, others don’t, hence the importance of early screening.

He added that bad lifestyle habits can make children more susceptible to CKD since parents influence how they eat and how active they are.

Remote work is a boon to chronic kidney disease patients

WORKING from home is a boon to chronic kidney disease (CKD) patients, according to the founder of a support group for patients with end-stage renal disease.

“I work as a virtual assistant now,” said Reynaldo S. Abacan, Jr., founder and president of Dialysis PH Support Group, Inc., on the sidelines of a June 24 event organized by AstraZeneca Philippines. He added that many patients have similar remote jobs, such as online selling, that have flexible working hours.

Using public transport is another major deterrent to office work, Mr. Abacan added in the vernacular, because CKD patients run out of breath while going up and down flights of stairs.

Traveling out of town, meanwhile, entails securing medical clearance beforehand, as well as contacting a dialysis center in case an emergency dialysis session is needed on location.

Nutrition also gets a boost from the work-from-home setup. “Once you eat out, your choices are … fast food, milk tea,” he said in the vernacular.

Mr. Abacan, who does not have a family history of CKD, had glomerulonephritis, a type of CKD, as a child. He went undiagnosed until he was 20, when the disease was at stage 5.

He told BusinessWorld what added to the burden on his kidneys was his fondness for chips and soda.

“A bottle of Mountain Dew has a lot of tablespoons of sugar,” said Dr. Nickson E. Austria, head nephrologist of Calamba Medical Center. Dr. Austria also noted that all types of salt are still salt: “They’re all sodium chloride. Even Himalayan salt; it’s only pink because it has traces of certain minerals.”

Dr. Elizabeth Lapid-Roasa, a consultant of both the University of Santo Tomas Hospital and St. Luke’s Medical Center Global City, advised being a discriminating consumer.

“Instant noodles are culprits here. If you look at the sodium content, it’s more than the daily requirement already,” she said. She suggested workarounds for those on a tight budget, including adding vegetables like chopped carrots, not using all the seasoning that comes with the instant noodle packet, or replacing seasoning with herbs.

“CKD changed the course of my life,” said Mr. Abacan in the vernacular.

CKD is characterized by a gradual loss of kidney function over a period of time. Because the kidneys have been damaged, waste builds up in the body, and in turn causes other health problems. Symptoms in the late stages include swelling of the feet and ankles, shortness of breath, and fatigue and weakness. — Patricia B. Mirasol