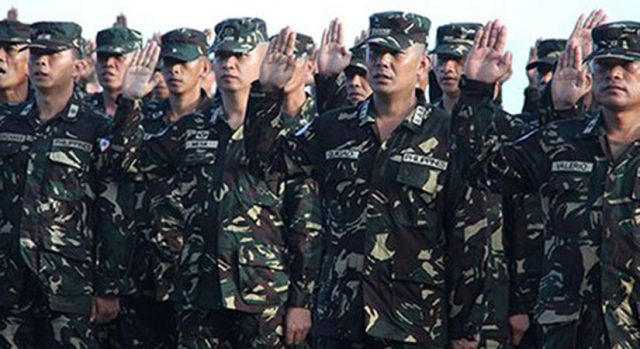 THE PHILIPPINES must rely on its own military to protect its territories, the presidential palace said on Monday, amid a swarm of Chinese ships in reefs claimed by the Southeast Asian Nation in the South China Sea.

The Philippines lost two isles despite a Mutual Defense Treaty with the United States, presidential spokesperson Herminio “Harry” L. Roque told a televised news briefing. “We didn’t get any help,” he said in Filipino.

Lawmakers, analysts, and former government officials have been urging President Rodrigo R. Duterte to strengthen alliance with the US, Japan and Australia to protect its territorial rights.

While Manila strives to maintain its cooperation with Australia, Japan, India and its Southeast Asian peers, the country still must rely on its own capability, Mr. Roque said.

“We need to stand on our own two feet. In the end, we have to assert our national interest and that is what our President is doing,” he added.

Meanwhile, Mr. Roque said Mr. Duterte is not bothered by rumors that some active and retired generals have withdrawn support from him due to his inaction.

A Twitter user at the weekend claimed a Viber group supposedly composed of almost 500 members was discussing the withdrawal of the military’s support for the country’s top leader.

The Philippine military on Sunday dismissed the rumors.

Military chief Cirilito E. Sobejana in a statement said the Armed Forces of the Philippines (AFP) is a professional organization committed to safeguard democracy and protect its democratic institutions.

The AFP also refuted the circulation of a message online about various foreign “warplanes” taking off and landing in Clark Airbase, dismissing it as fake.

No such landings or taking off of aircraft from other countries are taking place, it said, adding that the AFP was on normal alert.

It said it would focus on its constitutional mandate and said all soldiers, airmen, sailors and marines are “firmly behind the chain-of-command.”

The Philippines through the Department of Foreign Affairs (DFA) last week fired off another diplomatic protest against China after authorities spotted a swarm of Chinese vessels, including six war ships within its waters in the South China Sea.

The Philippine task force also said more than 200 Chinese ships were scattered in waters within its exclusive economic zone. About 15 vessels either manned by Chinese militia, the People’s Liberation Army Navy or the Chinese Coast Guard had also been spotted at the Scarborough Shoal.

The Philippines last month and early this month filed diplomatic protests against China over the presence of fishing boats, suspected to be manned by Chinese maritime militia, at a Philippine-claimed reef in the South China Sea.

Mr. Duterte sees no need to use force against the Chinese vessels occupying Whitsun Reef, his spokesperson Mr. Roque told an online briefing early this month.

Mr. Duterte thinks the sea dispute could be resolved through peaceful means, he said. The Philippines would continue to assert its legal victory at an international tribunal in 2016, he added. — Kyle Aristophere T. Atienza

Private sector partners up with gov’t to vaccinate more Filipinos