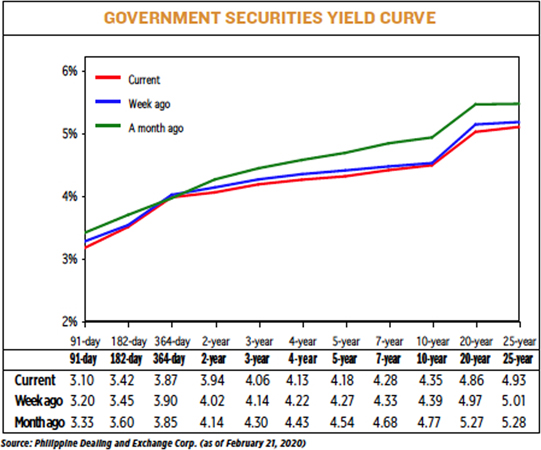 YIELDS ON government securities (GS) went down last week after the Bangko Sentral ng Pilipinas (BSP) signaled another rate cut as early as the second quarter.

GS yields, which move opposite to prices, dropped by an average of seven basis points (bps) week on week, according to Philippine Dealing System’s PHP Bloomberg Valuation Service Reference Rates published on Feb. 21.

“Sentiment was renewed when BSP Gov. [Benjamin E. Diokno] hinted [on Feb. 14] that they might resume their rate cut cycle as early as Q2. Looks like this is a lot earlier than expected, hence the strong buying across all tenors that carried over to [last] week,” Carlyn Therese X. Dulay, Security Bank Corp. first vice-president and head of Institutional Sales, said in an e-mail interview last Friday.

“Apart from that, the 10-year auction was surprisingly very strong and US treasuries continue to rally towards multi-month lows (US 10-year hit 1.44% last August 2019 and it looks like it’s going there now),” she added.

“Market optimism has surged with the supply overhang of the RTB (retail Treasury bonds) lifted, inflation anticipated to stabilize at the 3.0% level and the BSP looking to cut policy rates further this 2020,” he said.

On Feb. 14, the BSP chief said the Monetary Board (MB) might trim key policy rates by another 25 bps as early as the second quarter or the latter half of the year to rein in the possible effects of the coronavirus disease on the economy.

The decision followed the 75-bp easing that took effect last year, partially dialing back the 175 bps rate increasing in 2018 to curb the rising inflation expectations.

The central bank also revised its inflation outlook for this year to three percent from 2.9% previously, while maintaining a 2.9% inflation forecast for 2021 — still within the 2-4% target range.

Meanwhile, the BTr fully awarded the reissued 10-year Treasury bonds (T-bonds) worth P30 billion it auctioned off on Feb. 18.

The offering was more than twice oversubscribed, with total tenders reaching P83.5 billion, prompting the Treasury to open its tap facility for another P15 billion.

Earlier this month, the government raised P310.8 billion — P250 billion in fresh funds and P60.8 billion from the exchange offer program — from its three-year RTB offering.

The BTr has set a P420-billion local borrowing program this quarter, divided into P240-billion Treasury bills and P180-billion T-bonds.

The government eyes to raise P1.4 trillion this year from local and foreign lenders to seal off its budget deficit, which is expected to widen to as much as 3.2% of the economy.

For this week’s trading, Mr. Liboro sees a “slight pause” in profit taking as GS yields continue to “grind lower over the longer term.”

“However, while inflation remains a risk, given the readiness of the BSP to continue easing policy and the trend in the region of neighboring central banks who have expressed similar sentiments, rates appear poised to continue to grind lower over the longer term,” he said.

“We’ll have T-bills again [this] week but in any case, these will definitely be issued 5-10 bps lower given the move [last] week,” Security Bank’s Ms. Dulay said.

“Apart from that, no drivers on the local front so we can expect yields to trade within range and maybe follow moves in US Treasuries,” she added. — Mark T. Amoguis