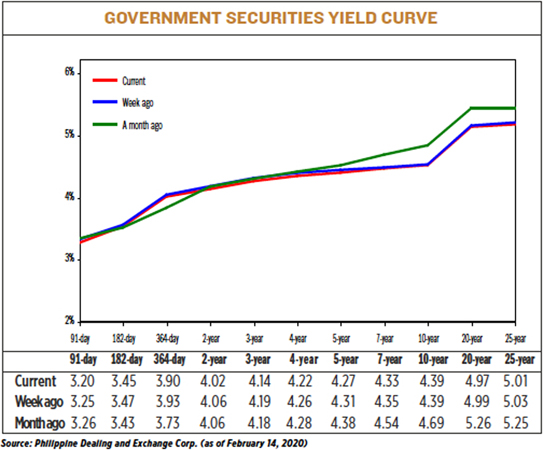 YIELDS ON government securities (GS) declined last week after Fitch Ratings upgraded its outlook for the Philippines’ credit rating, fuelling hopes for a possible hike in its assessment.

GS yields, which move opposite to prices, fell by an average of 3.1 basis points (bps) week on week, according to Philippine Dealing System’s PHP Bloomberg Valuation Service Reference Rates published on Feb. 14.

He added that yields went down following the Bangko Sentral ng Pilipinas’ (BSP) decision to cut key policy rates by a quarter of a percentage point the week prior.

“The outlook upgrade received by the Philippines from Fitch also weighed down on rates, despite easing US-China trade tensions,” a bond trader said in an e-mail interview.

The bond trader added that the downward movement “was largely felt on the shorter end of the yield curve as the latest BSP policy rate cut was expected to affect heavily on near-term rates.”

Last Tuesday, Fitch upgraded its outlook on the Philippines’ credit rating to “positive” from “stable” while maintaining the grade at “BBB” — a notch above minimum investment grade — which it received in December 2017.

A positive outlook indicates the credit rating could stay at its current level or be upgraded within the next two years.

A higher credit rating would mean lower borrowing costs for the country, as it makes the Philippines more attractive and reliable for investors to pour funds into.

In its report, Fitch said the Philippines is likely to be among the fastest growing economies in the Asia-Pacific region this year and 2021, with its pace well above the current “BBB” median.

The Philippines also received a credit rating upgrade to “BBB+” from “BBB” earlier this month from Japan-based Rating and Investment Information, Inc.

S&P Global Ratings upgraded the country to “BBB” last year, while Moody’s has maintained a “Baa2” rating — a notch above investment grade — for the Philippines since 2014.

Meanwhile, on Feb. 6, the BSP’s policy-setting body Monetary Board slashed key rates by 25 bps, bringing the overnight reverse repurchase rate to 3.75% and the overnight deposit and lending rates to 3.25% and 4.25%, respectively.

It also revised upwards its inflation forecast for the year to three percent from 2.9%, but kept its view for 2021 at 2.9%. Both forecasts still fall within the central bank’s 2-4% target.

For this week, Mr. Ravelas said GS yields “will continue to go sideways to down.”

Meanwhile, the bond trader said yields might move “with an upwards bias” ahead of the release of the “potentially less-dovish guidance” from the Federal Reserve minutes this week.

“The increase in yields, however, might be capped by lingering concerns over the spread of COVID-19 (coronavirus disease 2019) and likely weaker economic data on Japanese economic growth as well as US manufacturing and services data for the month,” the bond trader said. — ECAJ