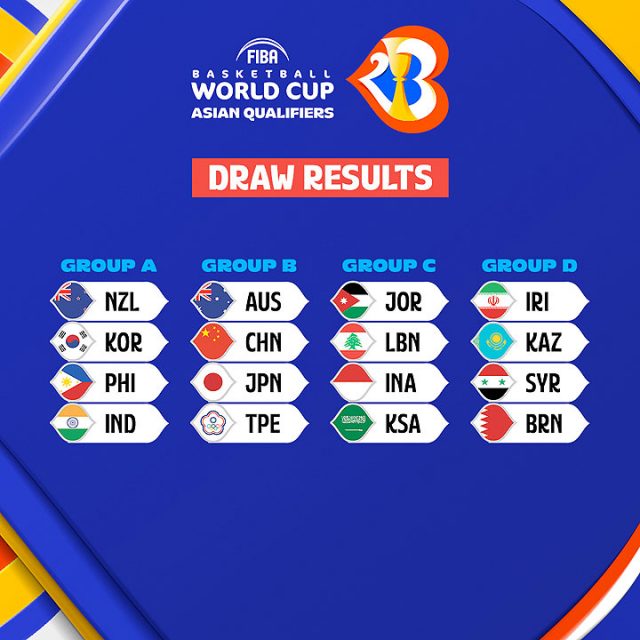 NOW that it knows where it will be competing in the Asia/Oceania region of the International Basketball Federation  (FIBA) World Cup (WC) 2023 Qualifiers, Gilas Pilipinas is now set to chart its plans on how to go about its campaign.

While the country is already assured of a spot in the World Cup, being one of the three host countries along with Japan and Indonesia, the national team has made it known that it will go in the qualifiers seeking to do well as part of its preparation for the 2023 basketball event.

Gilas is bracketed with New Zealand, Korea and India in Group A in the first round of the qualifying phase, with games set to begin in November this year.

Indonesia, for its part, needs to be ranked among the top eight teams at the FIBA Asia Cup 2021 in order to receive automatic qualification as per the decision of FIBA’s Executive Committee.

New Zealand is the highest FIBA-ranked team in Group A at number 25, followed by Korea (29th), the Philippines (31st) and India (78th).

Gilas program director and coach Tab Baldwin said that among the things they have to tackle is the composition of the team as they proceed with their push, needing for them to sit down with various stakeholders, including the local collegiate leagues and the professional league from which the players will come from.

“Everything has to be on the table. We expect the UAAP (University Athletic Association of the Philippines) and the NCAA (National Collegiate Athletic Association) to begin again next year so there’s a need for discussions with all of the stakeholders for all of those players involved,” said Mr. Baldwin, incidentally the head coach of defending UAAP men’s basketball champion Ateneo de Manila University.

“The PBA (Philippine Basketball Association) has to come back to the mix. We have to talk again about the potential of having PBA players,” he added.

Further foreign exposure is also being readied for the national team, seeing how beneficial it has been for the development of the squad.

“What we need to do right now is to identify the possible tournaments we can join. There might be out-of-the-country gigs, too. This is to strengthen our team and continuously improve heading into 2023,” said Mr. Gregorio.

The Gilas officials said they expect to get the ball rolling for the team by October and that they are bracing for a busy stretch from there.

“September will be very quiet for us, but October will be the restart of our practices. November, we will be preparing for the window,” Mr. Baldwin said.

For Asia/Oceania, six spots are up for grabs in the 32-team field that will see action in the World Cup.

The rest of the groupings have Australia, China, Japan and Chinese Taipei in Group B; Jordan, Lebanon, Indonesia and Saudi Arabia in Group C; and Iran, Kazakhstan, Syria and Bahrain in Group D.

As per FIBA schedule, the two-round qualification windows will run until February 2023. The national sides play home and away games across each of these event windows.

The 2023 FIBA Basketball World Cup is scheduled to take place from Aug. 25 to Sept. 10 with the Group Phase taking place in all three host countries, and the Final Phase of the tournament happening in the Philippines.

Labor candidate for President to fund recovery with wealth tax

Spot prices on WESM fall to P5.17 per kWh

Brandon Vera back in ONE Circle after a year and a half since last...