Last week I attended three lectures. First the talk of Fritz Ocampo, Chief Investment Officer of Banco de Oro (BDO), titled “The Philippines: back on track” on the evening of Feb. 20 sponsored by the Rotary Club of Rizal West (RCRW) and held at the Elks Club, Makati. I was invited by a former clubmate, Past President Patty Michener. Then, on Feb. 20 and 21, media briefings by the Independent Electricity Market Operator of the Philippines (IEMOP) and Department of Energy (DoE), respectively.

Fritz is a dynamic guy who served as President of RCRW and District Secretary of Rotary International District 3830 twice. He showed rigor in his contention that projected GDP growth for 2020 will be 6.5%, despite the COVID-19 scare and economic dislocations.

Nonetheless, I do not share Fritz’s and BDO’s optimism. I think a GDP growth of 5.0% to 5.5% this year is more realistic. Consider these two points: One, a decline in tourism revenues. The Department of Tourism and the National Economic and Development Authority (NEDA) said the tourism industry is projected to lose up to P23 billion a month due to the persisting COVID-19 scare. Visitors from China reached 1.2 million in 2018 and probably 1.5 million in 2019. Many airlines, hotels, resorts, and shops are already affected.

Two, there is already a growth deceleration trend from 2016. The COVID-19 scare has further dampened household consumption, private investments, and net merchandise exports.

The IEMOP figures for peak demand do not consider yet the effects of COVID-19 scare. Below are their numbers including the Effective Spot Settlement Price (ESSP) for customers at the Wholesale Electricity Spot Market (WESM). I added a column on GDP growth trend (see table 1).

I think the IEMOP peak demand projection of 14.19 GW is high. Aside from lower GDP growth this year related to COVID-19 scare, electricity demand is projected to be lower due to the current transition to La Niña where we can expect more rain and colder temperatures.

The temperature anomaly (deviation from the average) for the Niño 3.4 region — the widest, centermost part of Pacific Ocean — in hot months are as follows, numbers in degrees Centigrade (C), data from Australia Bureau of Meteorology (BOM):

Taken together, the projected demand can be slashed by roughly 200 MW. This is shown under “Peak Demand B” below. We compare the supply margin of the three hottest months April — June under two scenarios, IEMOP’s and this paper’s. Peak supply 1 (PS 1) has an allowance for 1,200 reserves and it can aptly cover the projected margin by June of -67 MW.

If we take Peak Demand B scenario, the supply margin under PS 1 is still a comfortable +133 MW but when the reserve is raised to 2,000 MW, the margin turns into a deficit (see table 2). 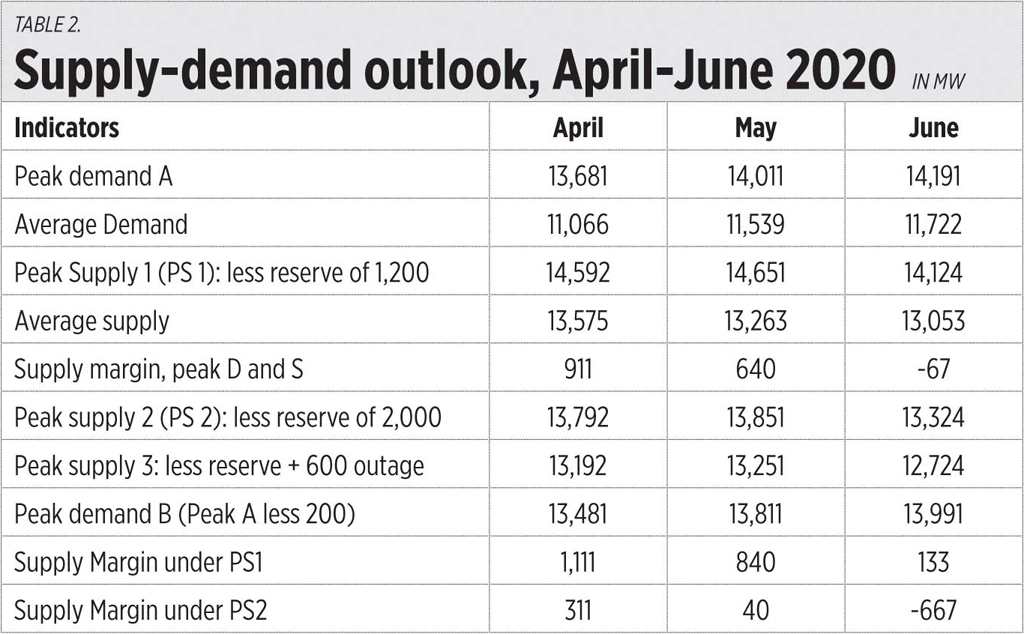 The DoE briefing focused on the Luzon grid and they foresee potential “yellow alerts” for three weeks, from late May to mid-June this year where the power supply will likely be below the contingency reserve.

These are good moves but I don’t think they enough. We need new peaking plants and not just old barges, and we need to remove the disincentive of power price control, especially the secondary price cap at WESM. I raised these during the open forum at the DoE press conference. The Energy Regulatory Commission should realize that “cheap but unavailable” power is more costly than “expensive for few hours but available” power.

Omicron is the new COVID kid on the block: Five steps to avoid, 10 to take immediately

Elections and political prisoners: They do mix

Integrated PPP vs Hybrid PPP: The case of Kaliwa Dam

Carbon tax is not good

Inflation worldwide is declining, no special credit to Dutertenomics