Oil prices are soaring. The explanation boils down to supply and demand. Supply is tight, and demand is climbing in the wake of a nascent global recovery. But the hardship and impoverishment brought about by the pandemic and the attendant crisis have made oil prices a politically sensitive issue.

Hence, some intervention is necessary. Politicians, whether associated with the administration or the opposition, have called for the suspension of the excise fuel taxes to alleviate the price increases. And so have the cause-oriented groups. For the simplicity and straightforwardness of the call, the public supports it.

But policy-making is complex. The policy maker has to consider the different options and determine which among them is best. The concept of tradeoff is a guide to choose the most appropriate, the soundest policy.

Similarly, the proposed policy (in this case, suspension of the excise fuel taxes) must be weighed against the potential gain or benefit from pursuing an alternative policy. Economists define this as the opportunity cost.

Moreover, although economic thinking is utilitarian (calculating costs and benefits), it has subscribed to the equity principle. Economics is painfully aware of the equity-efficiency tradeoff. Society and government adopt progressive taxation like having higher tax rates for high-income groups. Affluent consumption like the purchase of high-end vehicles is subject to heavier taxation. A bigger chunk of the national government budget is allocated to benefit the poor and the disadvantaged.

Considering the above, I say that a suspension of the excise taxes on fuel does not pass muster. Fellow columnist Diwa Guinigundo captures the considerations regarding both tradeoff and equity. In his BusinessWorld column “That creeping game changer” (Oct. 28, 2021), Diwa wrote:

“To many, scrapping the excise tax on fuel could be a game changer in addressing inflation and helping the poor. This is what is salient about the proposal, but this salience effect could also distort our perspective on the more important, though less obvious, bad consequences of this regressive proposal on our desire to recover from the pandemic and economic recession.”

Let me cite the data to bolster Diwa’s position. Consider the data from the 2018 Family Income and Expenditure Survey (FIES). Here, we look at transport spending, given that transport prices significantly depend on fuel pricing.

• For families with annual income less than P40,000, the spending for transport was 2.9% of total expenditures.

• And the highest earners, families earning P500,000 and above, used 7.7% of their total spending for transport.

3. From a different angle, the Department of Finance (DoF) has made estimates regarding “savings” from a suspension of the fuel excise taxes for each income decile group. To illustrate, a suspension of all excise fuel taxes (and the corresponding value-added tax on the fuel excise taxes) in 2022 may result in yearly average savings of P513 for the poorest decile, P758 for the second decile, P977 for the third decile, P1,212 for the fourth decile, P1,508 for the fifth decile, etc. In sharp contrast, the savings for the tenth decile would amount to P24,202. In the same vein, the top 1% of households would have average savings amounting to P59,143. (See the DoF’s table.) 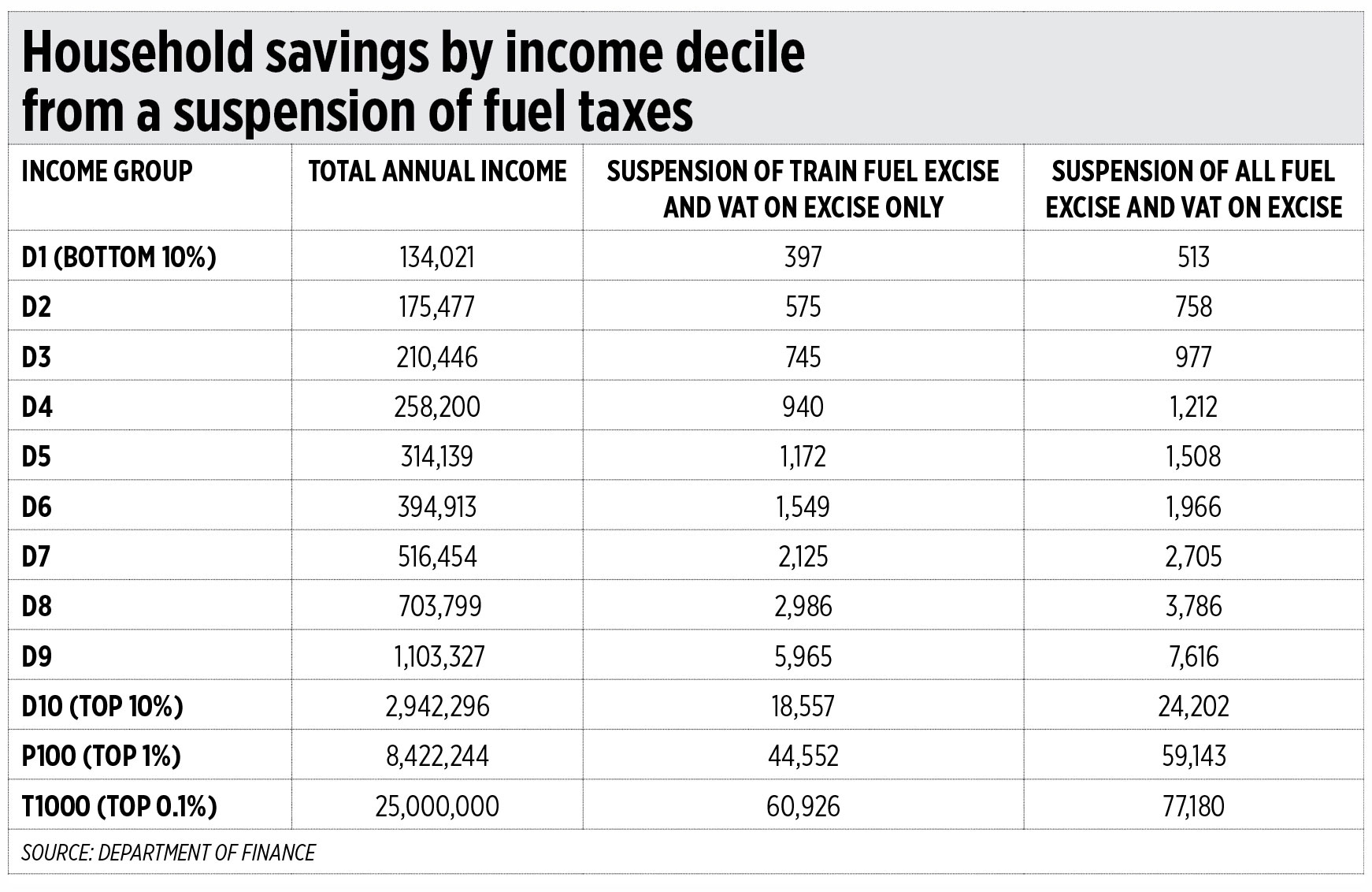 4. Seen from another lens, the DoF says that the savings from the suspension of all fuel excise taxes would increase household income in 2022 marginally for the bottom half of the households— by 0.38% for the poorest, 0.43% for the second decile to 0.48% for the fifth decile. On the other hand, the top decile would increase income by 0.82%.

All in all, the evidence overwhelmingly shows that a fuel tax is a progressive tax. The upper classes, especially the rich, are the main consumers of fuel. Suspending the excise taxes on fuel benefits the rich more than the poor. The fuel taxes thus serve the equity objective.

We add the argument that fuel taxes correct a negative externality. Such taxes internalize the costs to the environment and society brought about by carbon emission. Taxes on fossil fuel have all the more become relevant when the global community is taking collective action to address climate change.

Isn’t it better, more proper, to spend such a huge amount to provide economic relief to the poor, the unemployed, and the hungry? Such relief would address not only the impact of rising prices from fuel but also the adverse impact arising from hunger and loss of income.

In this light, the proposal of suspending fuel taxes is weak. To summarize and to cite Diwa, it is regressive. It does not serve the equity objective.

It also results in massive forgone revenues. Here, we take note of the warning that the soaring global fuel prices may not be a temporary phenomenon. Damien Courvalin, senior commodity strategist from Goldman Sachs, said: “This is not a transient winter shock like it could be for gas. This is actually the beginning of a material repricing higher for oil.” He also said: “The fundamentals actually very much support the view of higher prices than we’ve seen, pretty much since 2014.”

This raises a practical question: How long can one suspend the fuel taxes, given that the high prices would stick? The longer the suspension, the worse the outcome would be for society —forgone revenues, bigger government deficit, bigger debt, higher interest rate, less investments, reduced employment, and anemic growth.

The superior policy is to retain the fuel excise taxes, and use the tax revenues to provide economic relief and social protection to the poor as well as allocate public transportation subsidy. This is pro-equity and pro-poor. This is sustainable.

The best place in the world to become a digital native

Metro residents to get P1,000 cash aid amid lockdown