The all-encompassing wave of change has hit Philippine media, well before renowned business magnate Manuel “Manny” V. Pangilinan had come in. Digital media were supplanting newspapers, and both television and radio networks as the Filipino consumer’s main and preferred source of information and entertainment.

Even then, for the Filipinos who still preferred television, it was a two-network town. No one would have imagined that another television network could rise to prominence anymore, especially given how fast the Internet was taking over people’s lives.

Now, Mr. Pangilinan was recently given a special award for his Outstanding Contribution to Asian Television at the 24th Asian Television Awards for championing the television network TV5, which through innovation and shrewd leadership had successfully undergone a revival.

“It’s a validation of a journey [which started] about a decade ago, many thought as foolish to embark. We invested as a third player in a two-network town at the crux of unpredictable times and rapid seismic changes in content creation, consumption, and human behavior,” Mr. Pangilinan said in a speech read by TV5 Chief Executive Officer Jane J. Basas, during the ceremony. 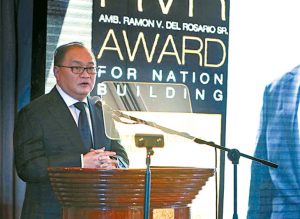 Being one of the country’s most prominent businessmen, Mr. Pangilinan is known throughout the Philippines. The telecommunications giant PLDT, Inc. and the Manila Electric Company (Meralco) are household names to the common Filipino family, and his dedicated patronage to sports has shaped Philippine basketball.

Yet, the award was the first instance which formally acknowledged his critical role in the Philippine media industry.

Mr. Pangilinan or MVP as he is commonly known, serves as the esteemed head of local media conglomerate MediaQuest Holdings, Inc. (MediaQuest), which is the mother company of some of the biggest names in Philippine media.

Before Mediaquest announced its acquisition of TV5 in 2010, TV5 was previously known as ABC Development Corp., and had an interesting role in the country’s history. Going back to the 1960s, TV5 has been serving the public with its own brand of journalism even before the Marcos era until it was forcibly shut down in 1972. The network made a remarkable comeback however after the People Power Revolution, growing to the point that it was dubbed the “Fastest Growing Network” in the 1990s.

Nowadays, TV5 is known as one of the three top television networks in the country. Its programs can be viewed worldwide through Kapatid TV5 and is currently available in the Middle East, Guam, North Africa, Europe, Canada, and the United States. The network is based in the 6,000-sqm TV5 Media Center headquarters in Mandaluyong City.

A commitment to charting the future

Meanwhile, The Philippine Star, another historic icon under Mediaquest’s belt, is one of the country’s most widely-circulated newspapers, one of the biggest names struggling under the disruption brought about by digital media.

The paper was first published seven months after the 1986 People Power Revolution. Its founders Betty Go-Belmonte, Max Soliven and Art Borjal were integral in the famous revolution, and as veteran journalists wanted to continue their legacy of serving the country’s return to democracy through honest, accurate reportage.

Through that ideal, The Star has grown and built around it a network of other publications covering a variety of topics, including the monthly magazine People Asia and the Sunday magazines Starweek, Gist and Let’s Eat. The PhilStar Media Group’s sister publications include business newspaper BusinessWorld; Cebu-based, English-language broadsheet The Freeman; Filipino-language tabloids Pilipino Star Ngayon and Pang-Masa; Cebuano-language tabloid Banat, and online news portal InterAksyon.

Eventually, the company caught the eye of Mr. Pangilinan, who, showing his commitment in entering the media industry, acquired The Philippine Star and all its sister publications through MediaQuest in 2014.

The link between Philstar Daily, Inc. and the 5 Network under MediaQuest Holdings has allowed new, innovative forms of journalism to come into existence. Right as digital media have overtaken the lives of Filipinos, flooding them with a variety of informative, entertaining, and sometimes malicious content.

Realizing that the need for credible sources of news and information was greater than ever, MediaQuest announced its flagship news channel One News on CignalTV in 2018. The new channel aimed to draw from the authority and vast amount of experience of MVP’s media networks — some of the biggest and most trusted media organizations in the Philippines, namely The Philippine Star, BusinessWorld, TV5, and Bloomberg TV Philippines — and provide an ambitious and concentrated effort to reinvent the way Filipinos consume and discuss news and current events.

Through the strength and capabilities of established names in print with respected broadcast news institutions, One News sought to keep the ideals of journalism alive in Philippine media, notably values centered around fostering critical discussion about the country’s most pressing issues, analyzing them from different and balanced points of view.

“Why are we doing this? It’s really for all of us to pursue the truth (against) fake news and so forth… that must be our paramount goal,” Mr. Pangilinan said, stressing that in the media business, it is everybody’s duty to tell the truth.

“In our business, or in our group… we should always tell the truth, no matter how much it hurts or how much it damages potentially,” he said. — Bjorn Biel M. Beltran

Pivoting to a people-focused workplace

Leadership in times of crisis

How logistics keeps the world turning

PHL WiFi use increases in March