Merchandise exports grew by 2.2% to $6.22 billion in September following a 12.8% annual decline in August, preliminary data by the Philippine Statistics Authority showed.

September marked the first expansion in exports in seven months or since February when it posted an annual growth of 2.8%. 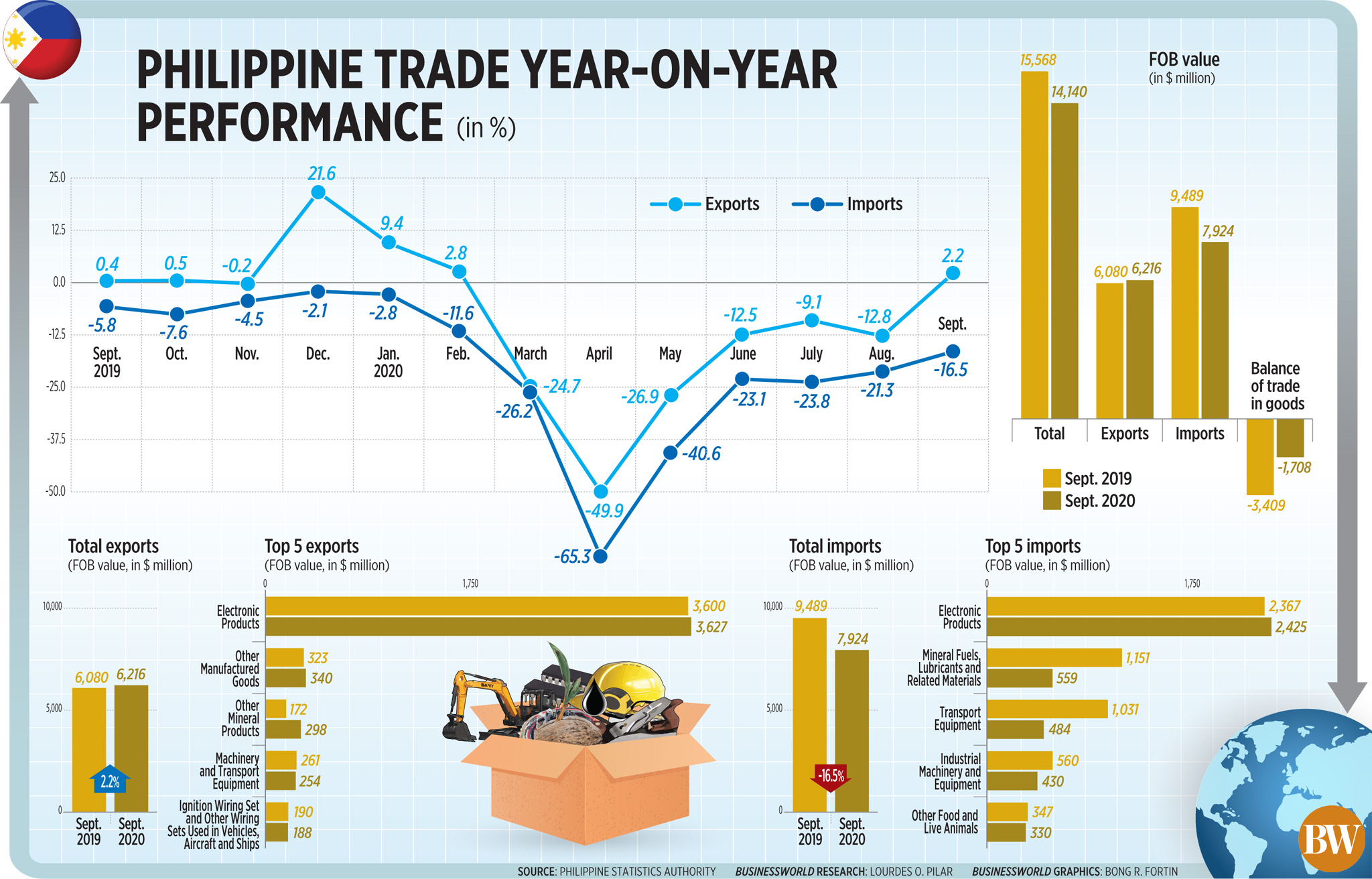 Meanwhile, merchandise imports declined by 16.5% to $7.92 billion, lower than the 21.3% contraction recorded in August, as well as the slowest since February’s -11.6%.

The trade deficit in September stood at $1.71 billion, smaller than the $3.41-billion gap in the same month last year.

Year to date, exports of goods amounted to $45.87 billion, down by 13.8% compared with the $53.21 billion in 2019’s comparable months. Still, this was below the 16% contraction expected this year by the Development Budget Coordination Committee (DBCC).

Meanwhile, imports were down 26% to $61.95 billion on a cumulative basis against the DBCC’s expectation of an 18% contraction for the year.

That brought the year-to-date trade balance to a $16.07-billion deficit, smaller than the $30.48-billion shortfall in the same nine months last year.

On the import side, raw materials and intermediate goods, which contributed 40.5% to the goods import bill in September, declined by six percent to $3.21 billion from $3.42 billion in the same month last year.

“Month-on-month import growth may signal some demand recovery as we slowly get out of stricter quarantine measures, while export growth was driven by global demand for electronic products,” he added.

China was also the country’s biggest source of foreign goods purchased in September, accounting for 25.3% of the total at $2.01 billion. Other major import trading partners were Japan and Korea, which accounted for 9.1% ($723.74 million) and 8.1% ($642.85 million) of total imports, respectively.

External trade is likely to pick up in the remaining months of 2020, economists said.

“For imports, the Bureau of Customs reported exceeding its collections target in October due to higher import volumes and better valuation, thus we expect imports to go up as well. If realized, the improved trade momentum may likely be sustained until the end of the year,” Mr. Roces added.

For ING Bank’s Mr. Mapa: “The sharp contraction in the trade deficit has helped the current account swing back into surplus which remains a positive for [the Philippine peso] in the near term. However, the sustained downturn in imports of raw materials and capital goods points to a continued deterioration in productive capacity and potential output, which does not bode well for prospects for the economic recovery.”

In an e-mail, UnionBank of the Philippines, Inc. Chief Economist Ruben Carlo O. Asuncion expects the decline in exports and imports to average 9.4% and 23.8% for 2020, respectively.

“These are actually better than what we initially expected for exports and imports at -12.2% and -26.1%, respectively. With the economy reopening and a general improvement of the external environment due to lesser people movement restrictions, we see trade improving further,” he said.

Trade gap widens as exports drop to its lowest in almost...