The coronavirus continues to cause fear in civil society and financial markets. In my last column, assurance was given that the Philippine growth story is not mythical. There is substance to the signs, even as they might be wonders to some.

Five years ago, Joseph Stiglitz published The Great Divide. He argued that the “crisis of the real economy lies behind the Long Slump, just as it lay behind the Great Depression.” What happened in the Great Financial Crisis of 2007-2009 was not exactly financial implosion, but was more of a consequence of economic weakness.

We have been addressing various weaknesses of the Philippine economy for the last 21 years. These efforts yielded higher total factor productivity, improvements in economic efficiency, and favorable labor market dynamics.

Seven years prior to 1999, we started institutionalizing game-changing policy and structural reforms.

President Gloria Macapagal Arroyo (GMA) initiated fiscal reform by way of the Expanded Value Added Tax, the Securitization Act, privatization of both generation and transmission of power, and the establishment of the wholesale electricity spot market.

President Benigno S. Aquino III (BSAIII) worked for the liberalization of foreign investments as well as the passage of the second law on foreign banks’ greater participation in the local banking industry, and the country’s Competition Act.

President Rodrigo R. Duterte (PRRD) can be credited for the passage of several fiscal reform packages, the Ease of Doing Business Act, the National ID System, amendments to the BSP Charter, the Rice Liberalization Act, Universal Health Care Law, Revised Corporation Law, laws on tax exemption of small-scale gold miners on sale of gold to the BSP and Islamic banking.

The proposition is that in the last quarter of a century, through five presidencies from different political persuasions, a critical mass of institutional changes have been achieved. They all translate into a stronger economy.

We can see the evidence in terms of the good progress in output and inflation, balance of payments and public finance. If it were not for those exogenous shocks of international origin, we would have a higher trajectory of output growth and a lower inflation path.

I show here one of my favorite charts that I used to present during investment roadshows and presentations to both the IMF and credit rating agencies for the last 15 of my 41 years at the Bangko Sentral ng Pilipinas.

We derive the following simplified commentaries:

One, output growth has been solid since 1999 and sustained positive economic growth has been recorded through 2019. This is a period of 21 years, spanning the presidencies of JEE through PRRD. But one can observe that building blocks started to pile up during the Cory Aquino and FVR administrations after EDSA I.

Two, while Ferdinand Marcos’ output record appears on a higher path, this was achieved by enormous unsustainable public borrowing. When the country’s creditors called in their loans, the Philippines had to declare a debt moratorium. Growth started to slow down in the early 1980s and plummeted in 1984 and 1985 with runaway inflation.

Three, for the last 21 years, the lowest points of the economic path were associated with external shocks. Cory’s challenge was the first Gulf War and its ramification on inflation. JEE’s crucible was the Asian Financial Crisis. GMA’s term was quite tumultuous, challenged by issues of the IT bubble, the oil and rice crises, and the Global Financial Crisis. BSAIII’s term was challenged by the European debt crisis. We have yet to see the full impact of COVID-19 and the VFA’s abrogation on growth under PRRD.

The big picture is that despite numerous exogenous shocks for the last 21 years, we have seen the resilience of the Philippine economy. One can argue that there has been a decoupling of the economy from politics. This is what those policy and structural reforms have contributed. We have seen the initial resurgence of manufacturing and services.

With privatization and liberalization of various economic sectors, competitive forces have been unleashed resulting in greater economic efficiency and productivity. This is the essence of a strong economy.

The strong domestic anchors are our safeguards against the headwinds in this increasingly globalized economy. On the right track with the Build, Build, Build program, PRRD is challenged to now allocate more funds to public health. Building on the foundation lain for the last two decades, the administration must now implement a strategic and coherent public policy approach against the deadly virus. 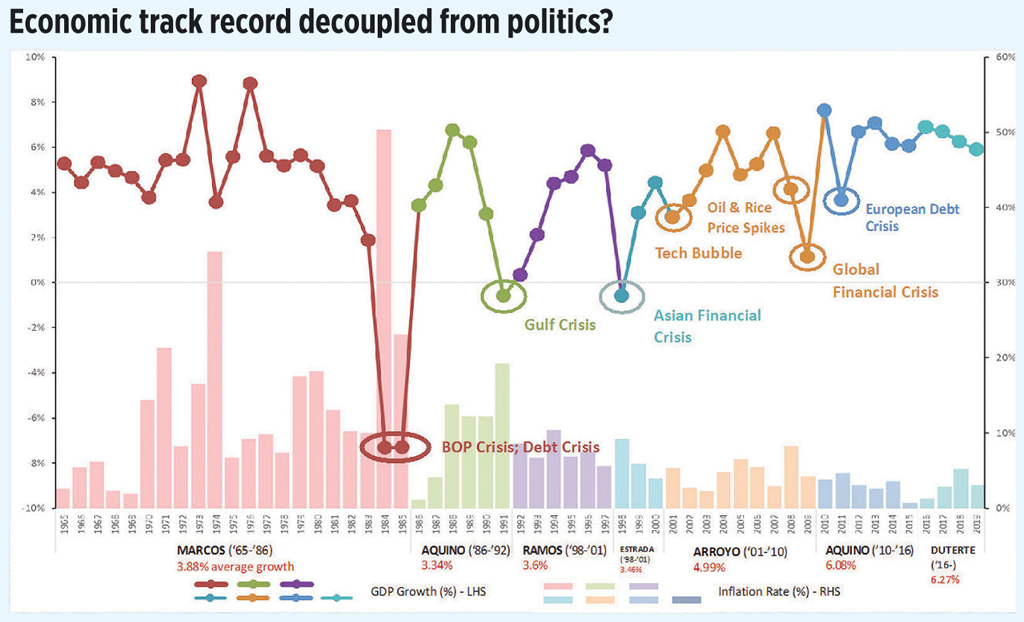