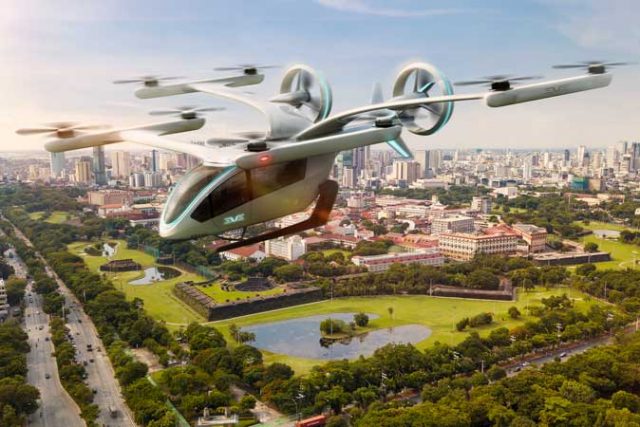 EVE Urban Air Mobility Solutions, Inc. is keen on bringing its electric vertical takeoff and landing vehicle (eVTOL) project to the Philippines as an alternative for commuters who want to avoid traffic jams in the capital.

“Eve’s eVTOLs are targeted to perform in markets where commuters spend a lot of time on the road stuck in traffic. This is common in Manila and cities around Asia,” Eve’s President and Chief Executive Officer Andre Stein told BusinessWorld in an e-mail interview on July 7.

“We want to remove these pain points from the daily lives of people,” he added.

Eve is dedicated to accelerating the urban air mobility ecosystem. It is supported by global aerospace manufacturer Embraer S.A., which is based in Brazil.

“The average range of our eVTOLs [is] designed to be about 100 [kilometers], meaning you could travel from Manila to Clark by an eVTOL, avoiding much of the traffic congestion on the road,” Mr. Stein said.

Eve said the partnership will advance the entry of its eVTOL aircraft into Ascent’s technology platform that allows users to book charter flights.

“Working with Ascent, we will be studying example routes and networks which would be ideal for eVTOLs to operate in cities and countries and to share these with the authorities,” Mr. Stein said.

“eVTOLs operating in countries could be a reality as early as 2026,” he added.

He said Eve’s target customers are existing air operators or prospective clients who are keen on offering eVTOLs as an alternative mode of transport.

Mr. Stein described eVTOLs as “cost-effective and low on noise and carbon emissions.”

“Eve wants to make eVTOLs accessible to the middle-class population. The design of our eVTOLs is centered around safety, ease of operations and low cost of ownership. In addition to that, [it is] low on noise and carbon emissions. A lot of thought has gone into our design. The ‘cabin’ of the eVTOL accommodates mobility-impaired people too,” he said.