MORE FILIPINOS are open to the possibility of a cashless society in the next few years, following the trend seen in the country’s regional peers, a study found.

More than half (52%) of 1,102 individuals surveyed in the country said they are in favor of a shift to a cashless society, according to a study by United Kingdom-based MoneyTransfers.com which gauged data from British market research firm YouGov.

Data from the research showed the Philippines lags behind ASEAN peers  Malaysia (65%), Indonesia (63%), Vietnam (60%) and Singapore (56%) in terms of being receptive to the idea of cashless society. 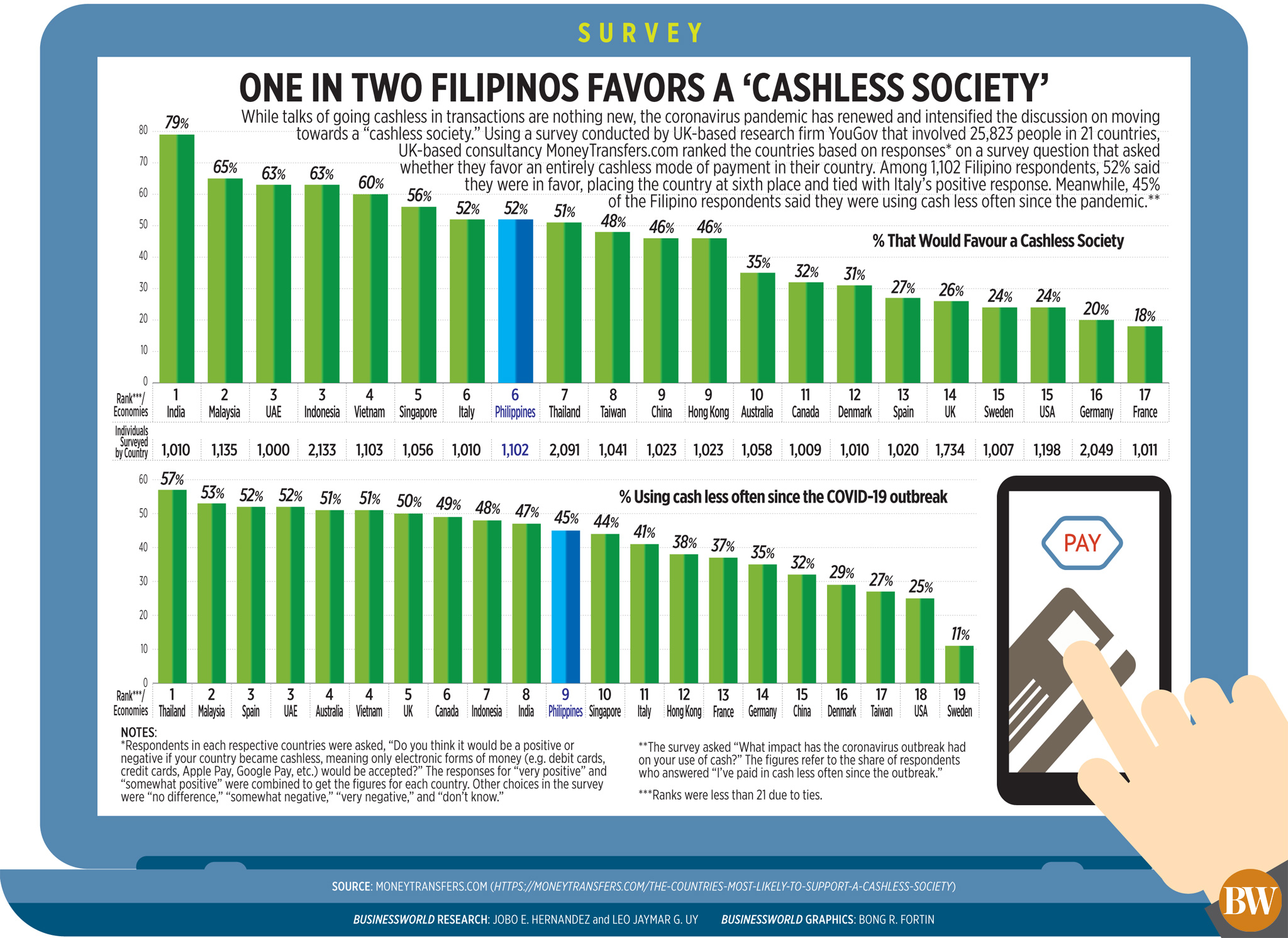 Meanwhile, other neighboring economies such as Thailand (51%) and Taiwan (48%) appear to be less keen on the idea.

“The argument for a cashless society has been around for a while, but the rapid rise of the coronavirus crisis has intensified the debate again amid concerns about banknotes and coins transmitting the virus,” MoneyTransfers.com said in a statement.

India topped the survey with 79% of 1,010 respondents saying they favor a digital economy.

Meanwhile, among other surveyed countries, France (18%), Germany (20%), and the United States (24%) appear to be the most reluctant about the concept of a cashless society. In total, the study included 25,923 respondents across 17 economies in Asia, Europe, Australia, and North America.

Separately, 45% of respondents in the Philippines said they used cash less often since the pandemic.

Commenting on the results of the research, Presidential Spokesperson Herminio “Harry” L. Roque said the country “can readily make a shift to a cashless society.”

Bangko Sentral ng Pilipinas (BSP) Governor Benjamin E. Diokno said in a Businessworld One-on-One interview in January that while a cashless society may not be possible within his lifetime, a coinless society could be viable by 2025 as digital payments continue to grow.

Mr. Diokno said coin demand in 2020 dropped by 57% in volume and by 60% in value from 2019. He said small transactions in the future may be settled through QR payments.

“The pandemic has rapidly reshaped, not only the financial system, but most importantly the way we interact and how we do business. As a result of the pandemic, we have seen an increased use of digital platforms,” Mr. Diokno said in an online forum held by the Joint Foreign Chambers of the Philippines on Tuesday.

Latest data showed online payments made up 10% of the total volume of transactions in the Philippines in 2018 from just 1% in 2013, according to the Better Than Cash Alliance. E-payments also increased to comprise 20% of the total transaction value from 8% in 2013.

The central bank wants 50% of the country’s payments, both in volume and value, done digitally by 2023. — Luz Wendy T. Noble