GROWTH in agricultural production slowed to 0.7% in the third quarter, as higher crops and fisheries production were offset by declines in livestock and poultry output, the Philippine Statistics Authority (PSA) said on Monday.

In a report, the PSA said the value of production of the farm sector — which contributes around a tenth to the country’s gross domestic product (GDP) and a fourth of jobs — grew by 0.7% in the July to September period but this was slower than the 2.3% rise a year ago.

However, it was an improvement from the 0.5% growth seen in the second quarter.

For the first nine months of the year, the country’s agriculture output slipped by 0.2%.

“At current prices, the value of agricultural production amounted to P404.6 billion, higher by 4.1% from the previous year’s level,” the PSA said.

Crop production climbed by 4.8% in the third quarter, accounting for 52.7%, of the country’s total agricultural output. However, this was slightly slower than the 5% growth in the previous quarter.

Palay, or unmilled rice, production rose 15.2% while corn output increased 3.5% during the July to September period.

“This is the result of the farmer assistance following the passage of Republic Act No. 11203 or the Rice Tariffication Law, especially the implementation of the RCEF (Rice Competitiveness Enhancement Fund), components on certified inbred seeds, combined with the ongoing national rice production program which assists farmers with hybrid seeds and fertilizer,” Mr. Tolentino said in an e-mail.

Agriculture Secretary William D. Dar in a statement said the increase in palay and corn production showed the government is on the right track in its initiatives with the two subsectors. He said the results are encouraging, especially considering the ongoing pandemic and bad weather during the period.

“Corn prices and supply will improve if the government can address problems concerning post-harvest and storage infrastructure and institute price support mechanisms for our farmers,” Mr. Navarro said in a mobile phone message.

Fisheries output also grew by 1.9%, contributing 15.8% of total farm production. This is also better than the sector’s 1% growth in the second quarter.

Rolando T. Dy, executive director of Center for Food and Agri-Business of University of Asia and the Pacific (UA&P), noted the production of commercial fisheries such as tuna and sardines provided a boost for the subsector.

“Fisheries also provides consumers with a cheaper source of protein such as dried fish and canned products like tuna and sardines,” Mr. Dy said in a mobile phone message.

Asis G. Perez, Tugon Kabuhayan convenor and former national director of the Bureau of Fisheries and Aquatic Resources (BFAR), said the catch of galunggong was higher during the third quarter.

“However, we are expecting galunggong production to decline because of the current implementation of the closed fishing season that began this November,” Mr. Perez said.

LOWER PRODUCTION
Meanwhile, livestock production, which accounted for 17.5% of total agricultural output, slid by 7.6% in the third quarter. The pace of decline slowed from the 8.5% drop in the previous quarter.

Hog production dropped by 7.7%, while cattle and carabao output slipped by 10.7% and 6.3% respectively. However, dairy production rose 16% and goat output increased 0.4%.

In a statement, Samahang Industriya ng Agrikultura Chairman Rosendo O. So said the detection and the ongoing spread of African Swine Fever (ASF) has wiped out local pork production in Luzon.

Mr. So said the DA should improve its meat inspection facilities and address the increasing retail prices of pork.

The current market prices are far from the DA’s suggested retail price (SRP) set for kasim at P260 and liempo at P280.

Poultry production, which contributed 14% of the entire farm output, also fell 3.8% during the third quarter. In the second quarter, the subsector recorded a 4.7% decline.

Chicken production went down by 7.2%. On the other hand, chicken egg production rose 6%, while the output of duck and duck eggs also increased 2.3% and 3.1% respectively.

“The performance of the hog and poultry sectors was expected due to the lingering effects of the ASF and low demand for poultry products,” Mr. Dar said.

UA&P’s Mr. Dy said the poultry and livestock subsectors were affected by the weaker demand from the hotels, restaurants, and institutions (HRI) segment.

“HRIs have shuttered and their purchasing power is down or they have shifted to cheaper alternatives,” Mr. Dy said.

In a mobile phone message, United Broilers Raisers Association (UBRA) Chairman Gregorio A. San Diego, Jr. said the figures of hog and broiler production would be much lower for the whole year due to the increase in imports.

The government is now targeting 1.5% growth in agriculture production this year, lower than its original 2% target due to the pandemic. 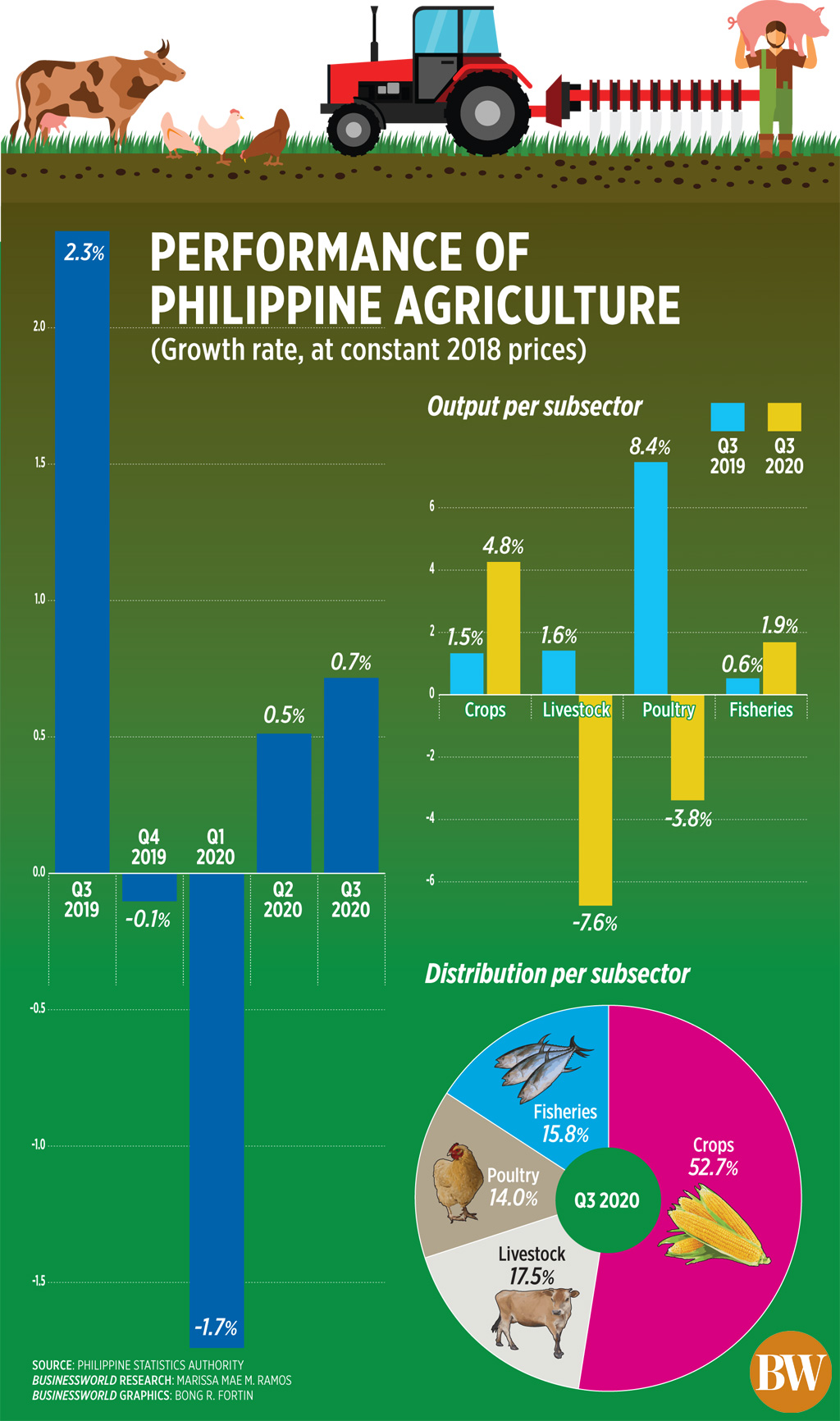 DTI confiscates P1.4M worth of uncertified goods in Metro Manila