In an address to the nation last Monday, April 13, about government policies to fight the China virus, a.k.a. SARS-COV2 which causes COVID-19, President Rodrigo R. Duterte said that a new treatment, an “antibody” has been developed by a giant pharmaceutical company. Problem is that “we are on the last ladder. Ang mauna niyan ‘yung mga mayayaman” (the first to benefit are the rich).

We take this statement by the President to make the following arguments.

One, there are many new treatments and new vaccines being developed by many companies. So not just one or two but more than 300 from at least two dozen pharmaceutical and biotechnology companies and laboratories. Vaccines are used on healthy people to train their immune system to recognize pathogens like the one that causes COVID-19 and neutralize these diseases before they can harm the body (see Table 1). 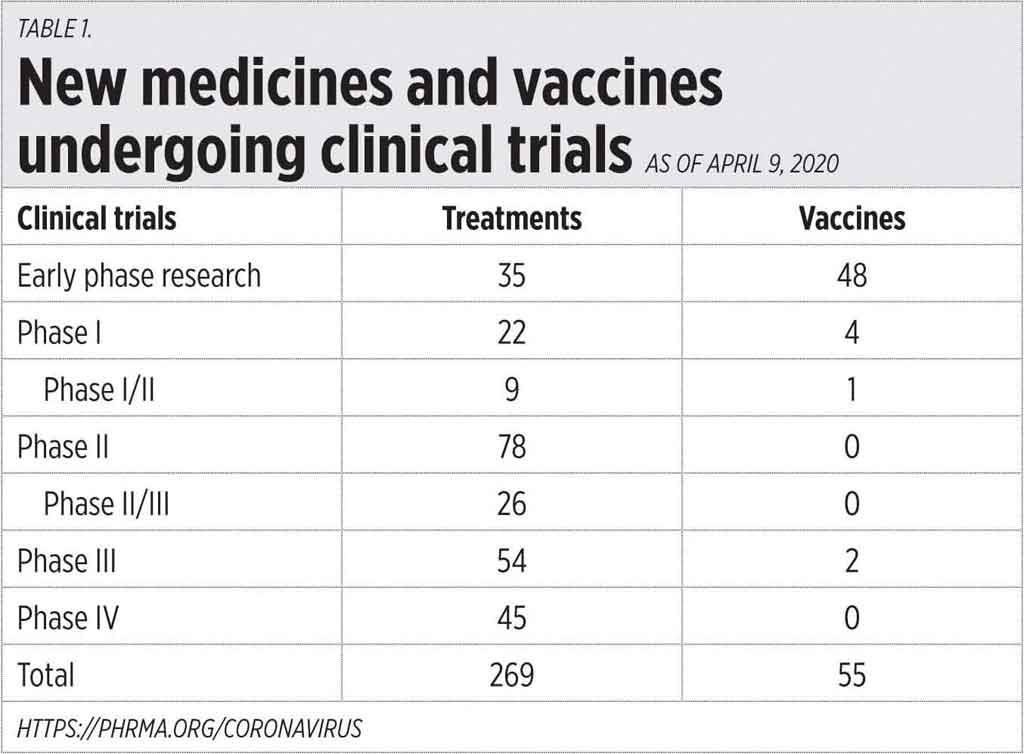 Of the 300+ active clinical trials, the majority are antiviral or target the virus directly, the rest focus on related effects of COVID-19 like pneumonia, inflammation, monoclonal antibodies, cell therapies, etc.

Two, some existing drugs can be repurposed to fight the virus and be manufactured cheaply. Prices as low as $1 to $29 per course of treatment and still deliver some profits to the innovator companies. They still need further clinical trials to specifically address COVID-19 but they have been used in some countries already (see Table 2). 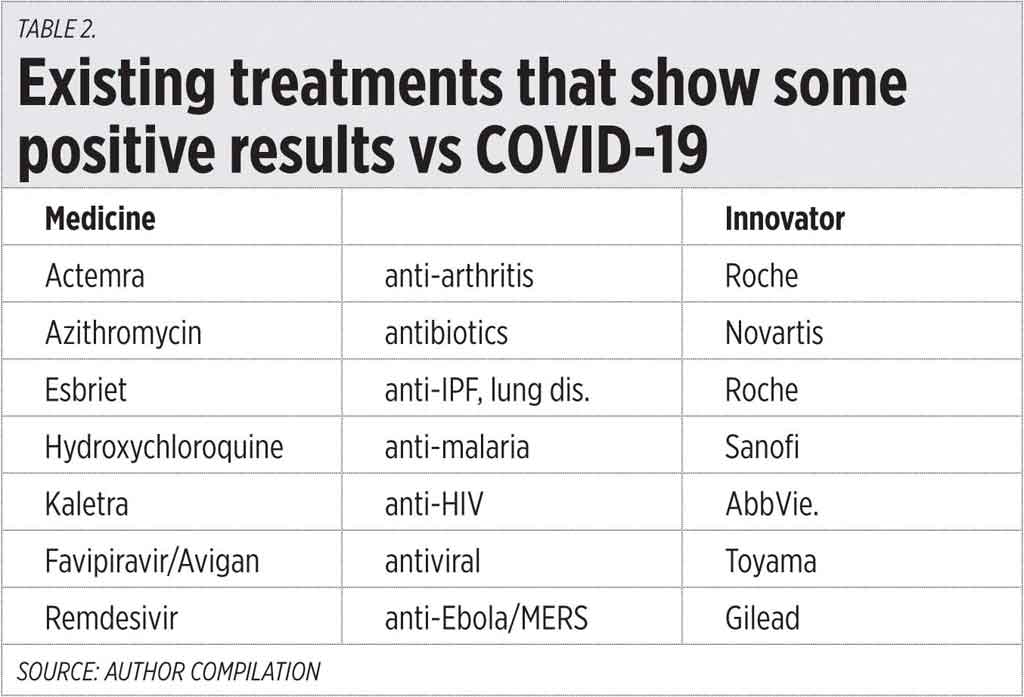 Of the 300+ active clinical trials, more than 200 are testing medicines previously approved for another indication like the above drugs, antiviral combinations, and novel compounds.

Three, public health policies, not country wealth, will determine who will get new medicines and vaccines. There is more competition among many medicines both existing and under development from many innovator companies, so physicians and patients will have more choices. Despite this, some governments are preparing anti-innovation, anti-IPR policies like compulsory licensing and drug price control that are meant to punish innovator companies (see Table 3). 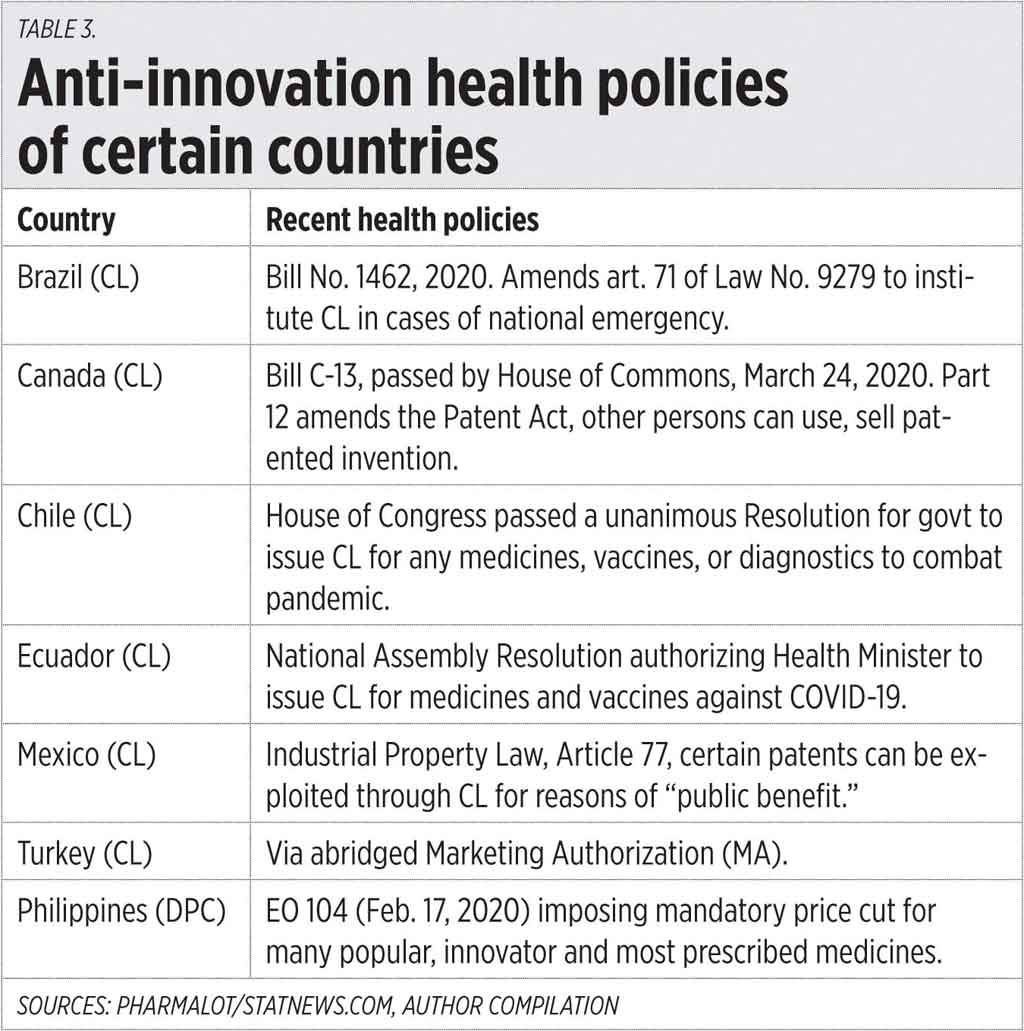 Four, new drug price control policies should be reversed by the President to attract innovators. When any of those new medicines and vaccines under development become successful and are available in the market, let the innovators bring their products to the Philippines. Initial high prices to cover high costs and high risks of developing these products can be mitigated by bulk purchase, lowering the price. EO 104 aims to impose price controls at the maximum wholesale price (MWP) then maximum retail price (MRP) levels and one of the four criteria is if medicines are most prescribed by physicians. Like compulsory licensing, this is based on envy, penalizing successful, revolutionary, disease-killer medicines and vaccines. The anti-rich, anti-innovator philosophy is wrong.

A rich family normally has drivers, helpers, other household and office workers. When that rich family is infected, chances are they might also infect their workers, who might infect the neighbors, vendors, family members and other people they interact with. When that rich family is protected by new medicines and vaccines, the threat of infection to other people is controlled. They might even shoulder the price of vaccination of their household staff. So the rich benefitting from new treatment will also benefit the poor.

The politics of envy is wrong and based on emotional and populist sentiments. Policies like compulsory licensing and drug price control should be avoided and abandoned. Attracting more innovation and competition is the way to help combat this virus scourge.

Rental fees in all CAAP airports waived for the whole year