Special Rules: No draw offers allowed until after move 40.

Tie Breaks: The following are used to break a tie for 1st place: (1) Direct encounter, (2) Wins, (3) Sonneborn-Berger. If they are still tied after the three systems are applied then a playoff beginning with four 25-minute games is played.

The Candidates Tournament finally started and, thanks to the coronavirus outbreak, it is the only major sporting event taking place right now. The participants are:

This is an eight-player double round-robin that will decide Magnus Carlsen’s challenger for the World Championship match that’s set to take place in Dubai this December. The 14-round event is being played in the Hyatt Regency Hotel in Yekaterinburg, Russia from 17 March to 3 April 2020. The prize fund is €500,000.

GM Teimour Radjabov, the winner of the 2019 World Cup, withdrew from the tournament 2 weeks before it started on corona virus pandemic fears and he was immediately replaced by the Frenchman Maxime Vachier-Lagrave. Of this we will have a lot to say later, mostly on the topic why wasn’t MVL in the candidates in the first place? Anyway I don’t think anyone will miss Radjabov’s 14 draws and will much prefer GM Maxime’s Sicilian Najdorf assaults and Gruenfeld counter-attacks.

The second seed Ding Liren had a terrible start by losing his first two games. He then recovered by defeating the top seed Fabiano Caruana in the third round. Now he is one point behind the leaders with 10 rounds to go. Not yet out of reach.

Ding: “My friends and coach all give me a lot of help. They encourage me to keep fighting. As he played the Slav at one point I wanted to play cd and make a quick draw but then I think it’s not my style and I have to play for the most critical line.”

The text and 6.e3 are the two usual moves here. Ding is a known advocate of 6.Ne5 so it is expected that Caruana is booked up against it.

The usual continuation here is 8.e4 while 8.Bg5 is another possibility that Black has to be aware of. 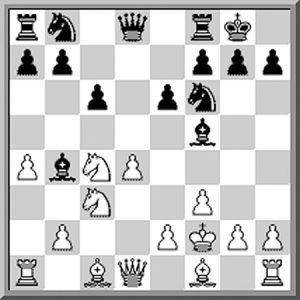 Eight years ago Ding defeated Mark Paragua with this “rare but poisonous approach” as remarked by GM Ruslan Scherbakov when he annotated this game for chesspublishing.com. According to him “it is not so clear how Black can equalize at the moment…” I think definitely Caruana would have something planned against this.

Taking with the pawn, incidentally opening up the g1–a7 diagonal, is I think what Black was hoping for. There will follow 10.dxe5 Nfd7 11.e4 Be6 this position has to be studied further but it looks like Black is fine.

Ding had already used up an hour here whereas Caruana was still blitzing, but it was time well spent as the Chinese GM had to navigate a lot of pitfalls here two of which are:

Ding Liren has managed to navigate the complications well. Just to show that Caruana was still in his preparation his clock shows 100 minutes left, which is exactly the time he had at the beginning of the game.

Caruana took six minutes here considering this move. A sign that something is wrong.

Definitely a mistake. Ding: “Since he played so quickly and I was down more than one hour after the opening I don’t know where he went wrong but [perhaps something] instead of h6. It’s a very strange position but during the game I was very worried about my position although I didn’t see a clear way to play for him since he was still in his preparation I thought there might be something wrong with my play.”

Ding wants to bring his queen to f2.

“At this point I thought my position was much better.” (Ding)

And now the objective of course is to bring out his last remaining undeveloped piece, his rook.

What a waste of a brilliant opening novelty!