SMC ASIA Car Distributors Corporation (SMCACDC), local BMW distributor, recently brought in new versions of its entry-point vehicles in the 1 Series and X1 as part of its “Joyfest” event held at the Bonifacio Global City.

The 1 Series is an all-new iteration — its third generation since the nameplate’s launch in 2004. The model represents the Munich-based car maker’s aspiration to compete in the subcompact executive car segment, just as it is the most accessible way into the brand. Indeed, some 2.5 million units of the first two generations were produced.

On the other hand, the X1 gets a significant refresh at its presumed generational life-cycle midpoint. The SAV (sports activity vehicle, BMW’s parlance for “SUV”) first appeared back in 2008 through the Paris Motor Show — capturing attention in a then-burgeoning small ute-crossover scene. The production of the internally coded “E84” ran from 2009 to 2015, with the second generation taking over thereafter. The new X1, also known as the F48, now enters the country following its world premiere at BMW’s #NEXTGen event in Munich last June.

Both the 1 and the X1 are sourced from Germany, and are “proper” members of the distinguished family. Averred SMCACDC President Spencer Yu in an exclusive interview with Velocity: “BMW is about driving dynamics, hence our motto ‘sheer driving pleasure.’ That is one of our hallmarks — whether you have the 1 Series, 3 Series, 5 Series. It’s all about driving. That gives you maximum ownership pleasure and joy… On top of that, we have all the technologies in the car. The numbers don’t tell you the story.”

He describes the X1 as “extremely fuel-efficient and torquey,” something we confirmed for ourselves last year when we took the X1 for a drive in Munich.

SMCACDC brings in only one variant of the X1, the sDrive18d xLine. This is actually a result of listening to what customers want, averred Mr. Yu. “They’re after better value,” he said. “We could put in all the options that they want, but the price would be very high. We asked them what features are important and unimportant to them… basically, they’re looking for more comfort — for maybe when they get stuck in traffic.”

Conversations with customers have revealed the following as musts: electronically controlled seats, impressive wheels, a good stereo, and diesel power plant for SUVs. “And people prefer a standard seat over a sports seat,” added Mr. Yu.

During our aforementioned trip to Germany last year to get acquainted with the new X1, Birte Voorgang, an X1 product manager for the BMW Group, said, “Our target market is very youthful, modern, and active. They live in an urban environment, and like to go outdoors.”

Getting behind the wheel of a diesel-sipping xDrive25d for drive around the periphery of the BMW Group München Zeppelinstraße facility, we found the vehicle sprightly and communicative — a good portion of the 231hp and 450Nm reachable even low on the rev band. When on the rear seats, the X1 surprises with space and provides large windows to admire the undulating roads and unfurling scenery.

The vehicle has been “given a standalone visual presence tailored precisely to its character profile.” Immediately obvious is the larger kidney grille and new front bumper which, Ms. Voorgang averred, “(make) the exterior design even more expressive… We’ve integrated the new LED foglights into the now-bigger outer inlets… giving it a broader stance, (and) we have new LED headlights with a more modern hexagonal design.”

At the rear are “new stylistic features” such as an inlay in the body-color rear apron.

Another highlight is the driver-side exterior mirror, which features a puddle lamp to project an LED “X1” image (and aid in illumination, of course) when the car is unlocked. The X1 sports 18-inch Y-spoke Style 566 light alloy wheels with run-flat tires.

New contrast stitching adorns the instrument panel, which is black on its upper section and adopts the color of the interior upholstery lower down. A high-gloss interior trim is complemented with pearl chrome inserts, and the seats feature standard Sensatec upholstery.

A center-mounted 6.5-inch screen is operated and its features navigated using the BMW iDrive Controller. BMW ConnectedDrive comes standard, and rear passengers can access two USB-C ports located near the rear ventilation. The rear seats can be folded down in three sections (40:20:40) and can slide forward by up to 13 centimeters.

Under the hood of the sDrive18d xLine (the sole variant for now) is a four-cylinder engine that puts out 150hp and 350Nm through the front wheels. The power plant is mated to an eight-speed Steptronic transmission. The new BMW X1 is priced at P3.09 million and is available in Alpine White and black.

Meanwhile, the 1 Series comes in two flavors — the 118i Sport and M135i xDrive. Already on its third generation, the front-wheel-driven 1 is said to highlight “BMW’s signature driving pleasure and dynamic excellence with a significant increase in interior space.”

As with the X1, the 1 Series reinterprets the “iconic BMW features.” The kidney grille is larger, bestowing a more aggressive presence, and the two kidneys also merge in the middle. BMW swaps its classic bars with a 3D mesh design calling to mind racing cars. Full LED headlights are now more angular for a more modern, dynamic, and young look.

The 118i Sport is powered by a three-cylinder heart blurting out 140hp and 220Nm, harnessed through a seven-speed, dual-clutch Steptronic transmission. The more potent M135i xDrive earns its M prefix in various ways, starting with a more potent engine — a two-liter, TwinPower Turbo four-cylinder delivering 306hp and 450Nm accessed through an eight-speed Steptronic Sport transmission. BMW says this power on tap translates to a zero-to-100kph time of 4.8 seconds (0.1 second less when equipped with an M Performance package) and a governed top speed of 250kph.

The M135i xDrive is equipped with a newly developed mechanical Torsen limited-slip differential, “which gives the car an even sportier edge by creating a locking effect between the front wheels.” Launch Control mode is also available, which makes full peak torque available in first and second gear. The company says that M Sport steering makes the BMW M135i xDrive more agile and skilled on corners. M Sport brakes “offer excellent fade resistance and abundant reserves of stopping power at all times.” While the 118i Sport is front-wheel driven, the M variant features BMW’s xDrive, an intelligent all-wheel-drive system.

BMW reports that the third-generation 1 Series offers “significantly more space than its predecessor with little change to its exterior footprint,” with rear passengers benefiting greatly from the enlargement via 13 millimeters more elbow room. The rear cargo hold also grows from 360 to 380 liters. Folding down the rear seats increases this figure to 1,200 liters. The minimum width of the trunk also increases by 67mm.

As to why BMW brings the M version of the 1 Series, Mr. Yu quipped with a smile: “Actually, nobody needs it; but everyone wants it.”

All BMW models come with a five-year or 200,000-kilometer manufacturer’s warranty.

The executive also said that owners of BMW units 23 months old or younger who bought before the standard five-year warranty can buy additional coverage. “You pay us the warranty, and we pay the warranty to Germany. This is a BMW factory warranty — a factory extension.” Mr. Yu also promised that every BMW launched in the future will be covered by the extended warranty. 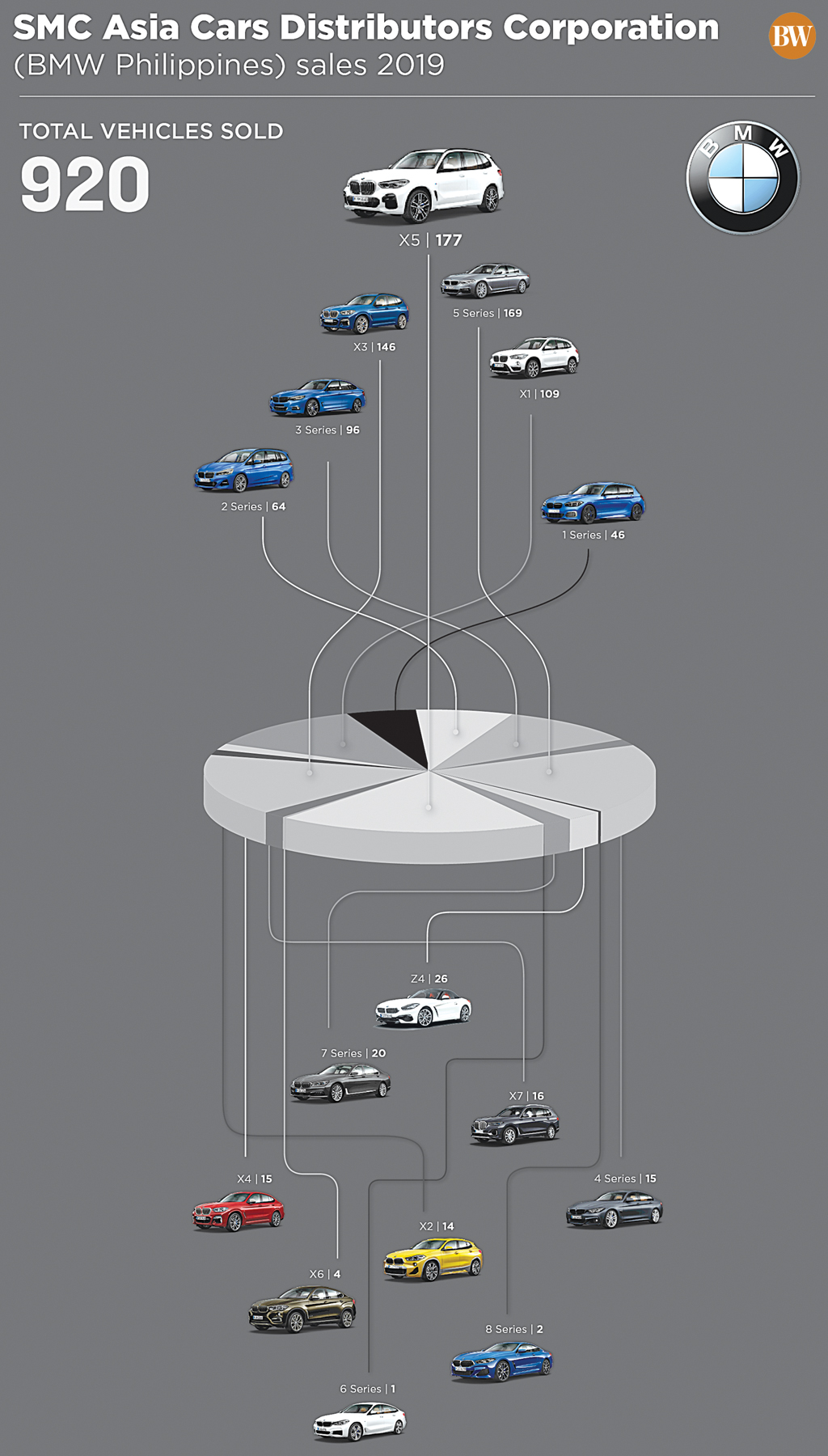