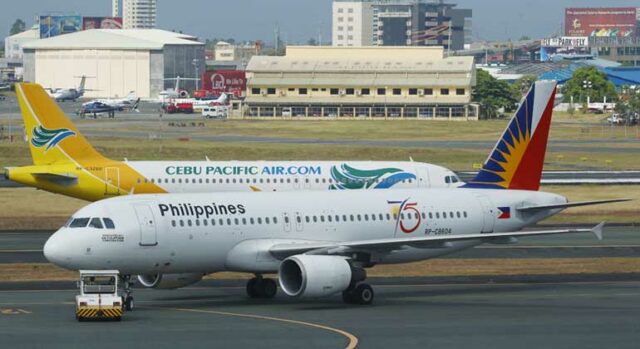 PHILIPPINE AIRLINES (PAL), Cebu Pacific, and AirAsia Philippines said on Tuesday that they will lower their fuel surcharges next month.

The three airlines issued statements following a Civil Aeronautics Board’s (CAB) announcement that it is altering the applicable passenger and cargo fuel surcharge for domestic and international flights to Level 9 from Level 12 in September.

“Airlines wishing to impose or collect fuel surcharge (next month) must file their application with this office on or before the effectivity period, with fuel surcharge rates not exceeding (Level 9),” CAB Executive Director Carmelo C. Arcilla said in an advisory issued on Aug. 15.

Level 9 on the CAB matrix permits a fuel surcharge per passenger of between P287 and P839 for domestic flights and between P947.39 and P7,044.27 for international flights.

“We welcome this positive development, and we will carry out the corresponding adjustments in our fuel surcharges,” PAL Spokesperson Cielo C. Villaluna said in a phone message.

“The new fuel surcharge rate will be applicable to tickets that will be purchased in September,” she added.

“We look forward to the lower fuel surcharge which should help make fares more affordable and stimulate air travel,” he said in a statement.

Low-cost carrier AirAsia Philippines said: “This will benefit many of our guests who are now planning their travels in time for the ‘Ber’ months.”

“(We) will reflect the adjustments in our ticket prices accordingly,” it added. — Arjay L. Balinbin