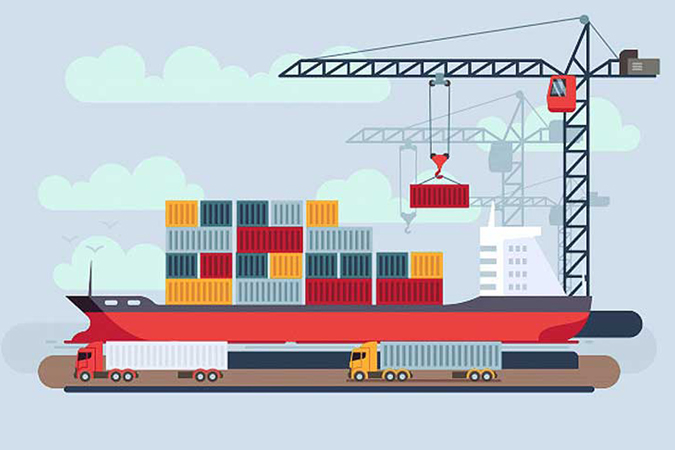 I am pleased to share with readers the March 3 report of Christine Tang and I for GlobalSource Partners (globalsourcepartners.com) subscribers.

Since our quarterly outlook issued a little over two weeks ago, the Philippines reported three new cases of the COVID-19 disease in addition to the three cases detected at the time of our report (with one death). In the meantime, travel ban for inbound travelers from certain regions of South Korea has been imposed, alongside that for China and its administrative regions. With the virus spreading rapidly in different continents, the fear is that the virus is spreading undetected within the country. Analysts in the meantime have started to increase their estimates of the adverse impact of the COVID-19 on local growth with some shaving 0.3 percentage points (ppt) off their original forecasts. (See Chart) 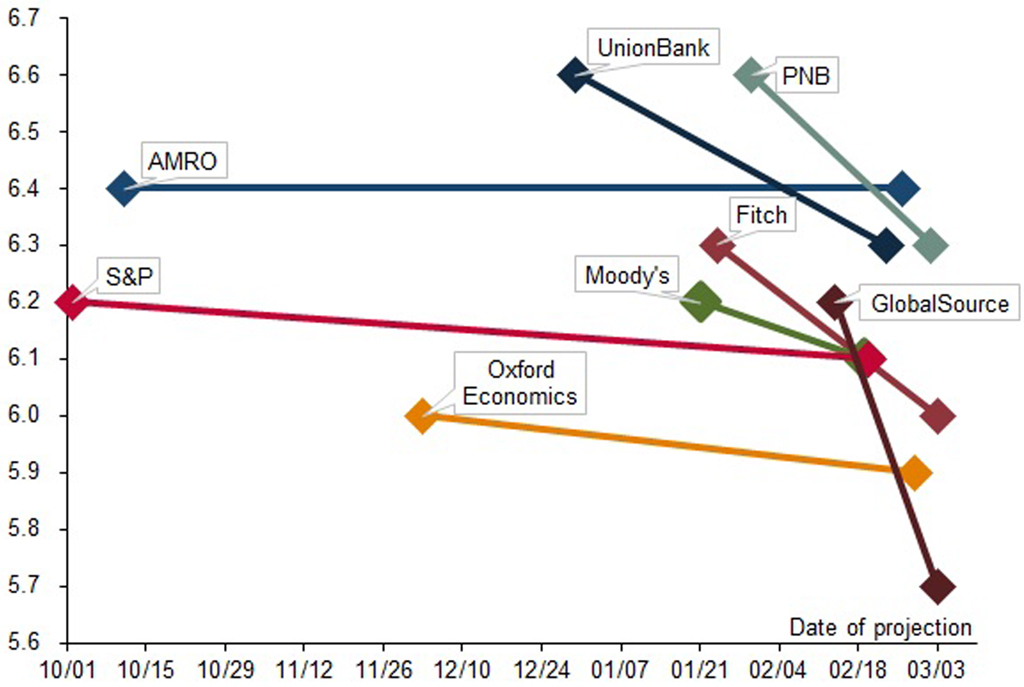 We think the impact would be larger. Our view is mainly based on what we’ve learned from experts who have tracked the virus’s spread and impact on China and the global economy. The IMF for instance has cut its GDP growth forecast for China by 0.4 ppt based on the assumption that activities will return to normal by Q2, at the same time hinting of “more dire scenarios.” The East Asian Institute, in a commentary co-written by a former World Bank Country Director for China, presented several worst-case scenarios where full-year Chinese GDP growth averages anywhere from 2% to 5.6%, compared with a 6% baseline, depending on the sharpness of the slowdown in Q1 and the speed of subsequent recovery. A McKinsey report takes the analysis a step further, taking account of the virus’s global spread and its knock-on effects on confidence. The report presents three scenarios with the base case assuming that activity will be back to normal in China by Q2, but confidences elsewhere from East Asia to the Middle East and Europe will be dampened by the growth of new infections which then leads to global economic growth that is lower by 0.5-0.7% from the company’s 2.5% baseline forecast. Other analysts have also highlighted the fact that the virus struck at a time when the global economy was still grappling with the fallout from the ongoing US-China trade spat, putting at risk a tenuous recovery and potentially engendering more protectionism.

The above estimates tell us that given the Philippine’s external linkages and particularly its increased closeness in recent years to the Chinese economy by way of tourism and exports, the negative impact on local growth would be in the range of 0.1 ppt to as much as a full percentage point. While the actual outcome ultimately depends on a number of unknown factors about the disease’s transmission, including how people get infected, the common view now seems to be that COVID-19 will be around longer and fears of contracting the disease will limit activity, especially travel, possibly beyond Q2. Hence, we think the McKinsey base case scenario of a global slowdown is plausible, in which case we think the impact on Philippine GDP would be closer to the mid- to top end of the range rather than the low end.

For now, after tracing the probable impact of the COVID-19’s spread through various channels (see the Table), we are cutting our growth forecast for 2020 from 6.2% to 5.7%, with further reductions possible depending on how the crisis evolves globally. We think that under the current environment of fear and uncertainty, more policy interest rate cuts are unlikely to have much impact. We worry too that, considering new data showing a substantial burst in public spending in December last year that resulted in a full-year budget deficit of 3.5% of GDP, fiscal stimulus this year would be less than initially expected, especially if government intends to stay within its 3.2% of GDP budget deficit cap. 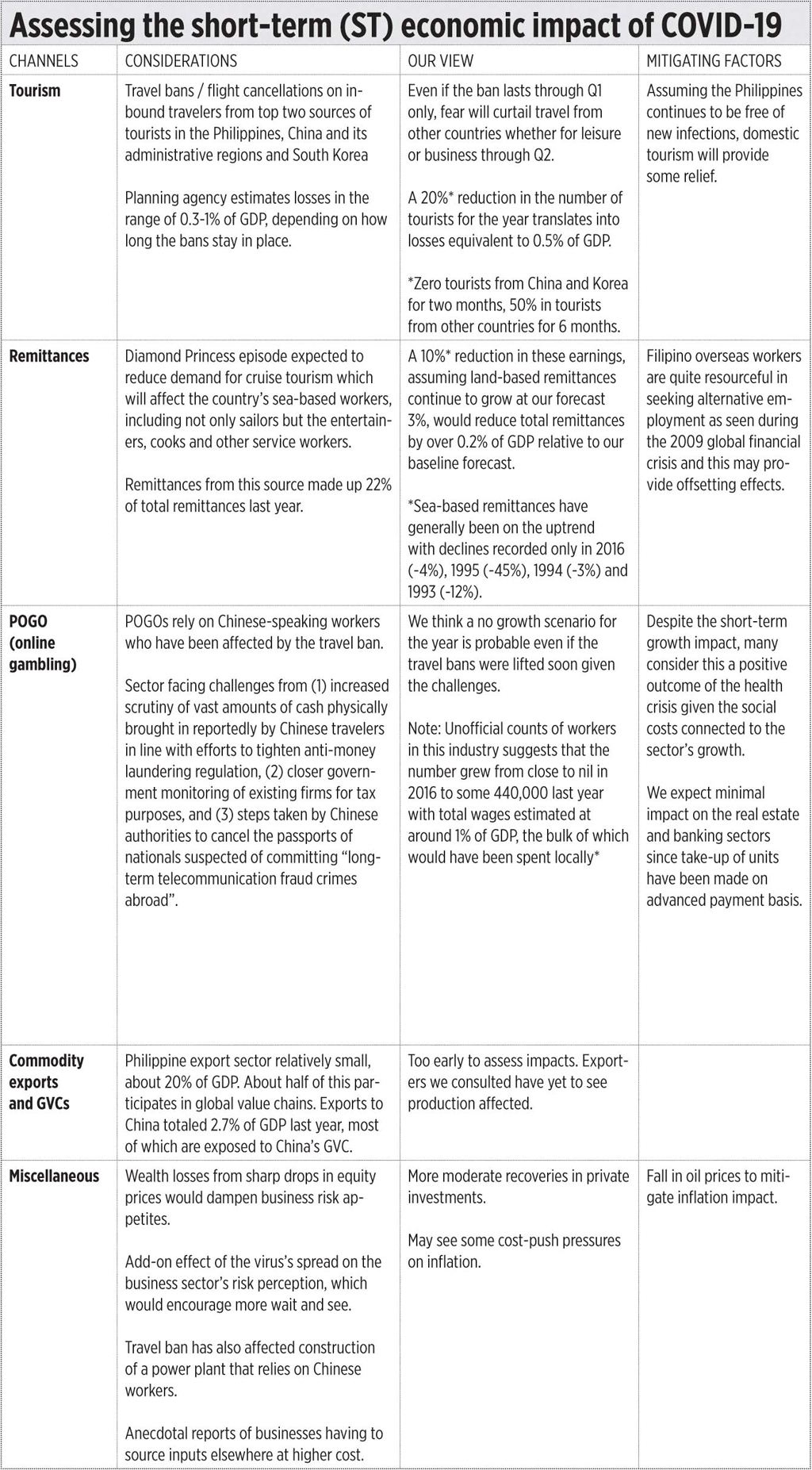 Finally, it is an opportune time for our Congress to pass the CITIRA (Corporate Income Tax and Incentives Rationalization Act) to remove uncertainties that have affected FDI’s flows in the past two years. The bicameral conference committee can use Senator Pia Cayetano’s approved Senate version as the basis, as proposed by the principal House sponsor, Joey Salceda, Representative of Albay’s 2nd District.

As the Foundation for Economic Freedom (FEF), FINEX (Financial Executives Institute of the Philippines), Management Association of the Philippines (MAP), Makati Business Club (MBC), Subdivision and Housing Developers Association (SHDA), UP School of Economics Alumni Association (UPSEAA) and other business and professional organizations said in a March 5 statement: “This structure of the CITIRA under SB 1357 will help create an enabling environment for Filipino businesses, generate quality jobs, and spur growth that is felt throughout the entire archipelago… It is also timely. The current disruptions in supply chains bring opportunities for the Philippines to attract foreign direct investments.”