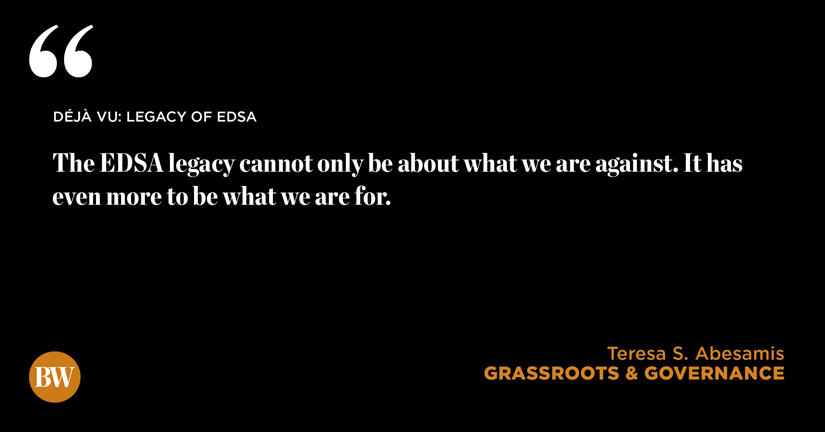 Where are we now, 34 years or just a bare generation after we triumphantly ousted the dictatorial and corrupt Marcos regime? The Marcoses are back and in power. Ferdinand Marcos has been interred at the Libingan ng mga Bayani. Congress is behaving like a presidential rubber stamp, with the exception of a few courageous non-conformists. Media entities are under threat and beleaguered. Graft and corruption among politicians and bureaucrats are running wild.

Worse, we have given up our legitimate sovereignty, confirmed by the UN Arbitral Court, to key parts of the South China Sea now ironically renamed the West Philippine Sea. Our fishers are disallowed from fishing in our own waters, and some of them almost drowned after their ramshackle boat was rammed by a bigger Chinese-owned boat. China has not apologized for what they term the “incident” and our government has not insisted that China do so. A former Foreign Affairs Secretary and retired Justice of the Supreme Court were disallowed from entering Hong Kong and technically deported, yet our government has not done or said anything in their defense. A duly elected senator is detained on obviously trumped-up charges attested to by long-term convicts who now seem to enjoy certain comforts in a military camp outside of Bilibid prisons where they belong. The Solicitor-General, the government’s official lawyer, has been allowed to retain his multimillion-peso service contracts with government agencies despite laws against such conflicts of interest arrangements. Thousands of alleged drug addicts and some pushers, mostly young and poor, have been assassinated in the streets in a so-called war against drugs — and yet the drug supply in the country has increased, not decreased. And now, President Rodrigo Duterte has single-handedly abrogated the Visiting Forces Agreement (VFA) with the United States of America notwithstanding constitutional provisions stipulating the role of the Senate in ratifying treaties. Without the VFA, our leverage with China, which is violating our sovereignty, has become even weaker.

What is happening to our constitutional democracy? Is this what we marched in the streets for year after year during the Marcos era? The rule of Man, rather than of Law is becoming the norm these days; and I fear that we are becoming insensitive to the increasing destruction of institutions that is going on. The Presidential spokesman goes on the air from day to day to contradict or revise what the President himself had said the day before, effectively telling lies; because that is really what he is doing. For example, the spokesman says the abrogation of the VFA is not because the President’s protégé was denied a visa when the President himself publicly said that was his reason. A new senator says the President is not for closing ABS-CBN when he has publicly said so. A legislator friendly to the Administration has attempted to explain that the President is emotional, and, what, that we have to make allowances for his emotions? Whatever harm he may be causing is OK because of how he personally feels?

US President Franklin D. Roosevelt has been quoted as saying democracy is not granted, it must be earned. What does this mean? We cannot rest on our EDSA laurels. It is clear to see if we think seriously about this that constant vigilance by the citizenry is vital if we are to strengthen our fledgling democracy. Part of this is defending the Freedom of the Press because the Fourth Estate provides access to alternative points of view, to public debates on policy directions being taken by public servants who have been elected by the people. If the President is “emotional” (immature?) then it becomes even more crucial that public discussion and dissent is allowed; when government officials, elected or appointed, are behaving like stooges whether or not the President is making sense. The citizenry, with the help of media must mobilize enough voices to prevent total abuse and irresponsibility. The military will eventually go with the will of the people. This is what we learned from our EDSA and Erap experience. This is what democracy is all about: the will of the people.

Our citizenry, especially the majority of voters, obviously need to be better educated and informed. Our educational system is a mess, as certified by international accreditation and testing institutions. We have to take our educational system more seriously. Even more than the drug menace. Moreover, we still have too many people living below the poverty line, thus they are motivated by basic and survival needs. Too much money has been wasted by corruption in government. We need activists and media to expose these abuses.

Media also, especially broadcast media, must also learn its lessons. Our citizenry must be helped to mature and be more socially sensitive and responsible. We seem to be over-entertained. Perhaps they can integrate more lessons in socially responsible values and behaviors into their media content.

The Roman Catholic Church as an institution must also review its own evangelization and education policies. So many of the corrupt public officials were educated in Catholic schools. What has happened to them?

Our schools need to assess what they can do to help strengthen values education and socially responsible citizenship. There are simple but valuable disciplines such as “cleanliness is next to godliness” that can instill self-discipline and responsible behaviors in our children. The values should be strong enough to last until they become parents and development actors and contributors.

We have a long way to go toward becoming a mature democracy. But the EDSA legacy cannot only be about what we are against. It has even more to be what we are for. EDSA enabled us to regain our democratic space. We need to defend it from shrinking even further. We have to protect our hard-won EDSA legacy. Keeping quiet or sitting on fences are destroying whatever we gained from EDSA.