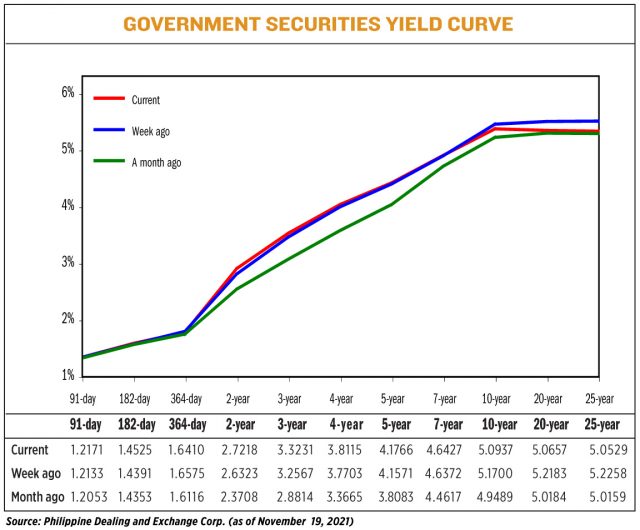 YIELDS on government securities inched down last week after the central bank lowered its inflation forecast and amid strong demand for the government’s retail Treasury bond (RTB) offer.

Debt yields, which move opposite to prices, went down by an average of 1.63 basis points (bps) on Friday from a week earlier, based on the PHP Bloomberg Valuation (BVAL) Service Reference Rates as of Nov. 19 published on the Philippine Dealing System’s website.

The Treasury on Tuesday raised an initial P113.545 billion at its price-setting auction for its offer of 5.5-year RTBs. This was oversubscribed by more than five times versus the initial P30-billion offer. The RTBs had fetched a coupon rate of 4.625%.

National Treasurer Rosalia V. de Leon said the proceeds of the offering will fund the government budget. The RTB public offer will run until Nov. 26, unless closed earlier, and the bonds will be issued on Dec. 2.

“We’re on the lookout for clues from US Federal Reserve officials on any plans to accelerate the tapering of asset purchases amidst US inflation at a 31-year high,” Mr. Javier said.

Fed Vice Chair Richard Clarida said they might discuss increasing the pace of the tapering at their December meeting, Reuters reported Saturday.

“For the week, government securities yields are expected to move just sideways and possibly with slight upward bias as some may take the chance to lighten up their holdings and take profit,” the trader said.

The trader said the market is waiting for an announcement from US President Joseph R. Biden regarding the successor of Fed Chairman Jerome H. Powell. He added the market will also continue to look at the demand for the RTBs and how it will affect bond supply. — Luz Wendy T. Noble with Reuters

Yields on government debt inch down on surprise cut