Discounts for early reservers of Suzuki XL7 and S-Presso

AHEAD of the launch of its two new vehicles here, Suzuki Philippines is offering promos for the XL7 and the S-Presso. The XL7, powered by a 1.5-liter K15B engine, has enough room for seven passengers. Suzuki says even third-row passengers will have adequate space. The SUV also boasts flexible seating arrangements; cargo capacity is 153 liters. Customers reserving from March 1 to 18, 2020 will get a discount of P30,000 off the P1.068-million tag.

Meanwhile, the S-Presso is said to “champion the perfect fusion of a bold and practical design,” reflecting a classic SUV look of Suzuki. Powered by a 1.0-liter engine, the mini SUV boasts a tall stance, high seat position, and ample luggage space. Customers who reserve from March 1 to 18, 2020 get a P15,000 discount off the vehicle’s price of P518,000. For more information, visit any of the 77 Suzuki dealerships or check out www.suzuki.com.ph. 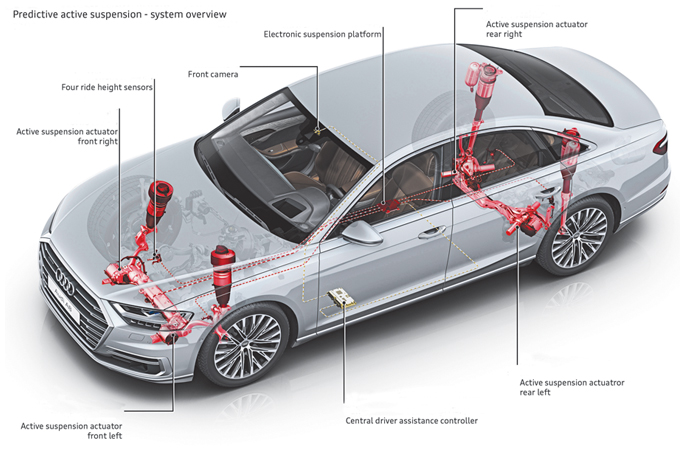 FITTED to its flagship Audi A8 L luxury sedan, Audi’s proprietary intelligent predictive active suspension allows the car to deliver, depending on the chosen settings, “the supreme ride comfort of a chauffeur-driven limousine, or the firm handling of a sports car.”

It works in tandem with a camera placed at the front of the car. With this, the system identifies uneven surfaces before the car reaches them and “predictively regulates the active suspension system.” The system thus signals the correct positioning travel to the actuators and actively adjusts the suspension. The effect is the reduction of body movement and compensation for undulations or similar unevenness on roads. The complex process is said to take just a few milliseconds as the camera generates information about road surface properties 18 times a second. The electronic chassis platform processes the road surface data and precisely actuates all suspension components almost in real time.

Completely dynamic, the predictive active suspension uses electromechanical actuators to adjust its settings. These actuators can lift up or force down each of the vehicle’s wheels individually to actively manage ride height in any situation — raising or lowering the car’s body by up to 85 millimeters from its central position at all four corners within five-tenths of a second.

Allowing this are compact electric motors located close to each of the Audi A8 L’s wheels. These motors are operated by the car’s 48-volt primary electrical system and governed by power electronics. A belt drive and a compact harmonic drive step up the electric motor’s torque almost 200 times, or to 1,100Nm, and apply this to a steel rotary tube. The latter is permanently attached to a preloaded titanium rod located inside it and capable of turning through more than 20 degrees. From the end of the rotary tube, the force is transmitted to the suspension via a lever and coupling rod. At the front it acts on the spring strut while at the rear it works on a transverse link.

Dynamic and Comfort Plus settings work in conjunction with the car’s air suspension and the Audi drive select dynamic handling system. In Dynamic, the Audi A8 L becomes a sports car as it turns in firmly, its body leaning over by only two degrees, instead of more than five degrees in standard setting, when cornering fast. The car’s front end rises or dives minimally during acceleration or braking, respectively.

Comfort Plus lets the luxury sedan glide more smoothly over any bumps. The setting also offers transverse force reduction. Upon entering a bend, this raises the body on the outer side of the bend while lowering it on the other side. The result is that the driver and passengers barely notice the Audi A8 L is cornering. The Stuttgart-headquartered brand says that “even drinks in the cup holder will not spill.” Straight-line travel in this mode also reduces pitching motions.

Even when at a standstill, predictive active suspension can work. As the Audi A8 L’s door handle is pulled, the body quickly raises by up to 50 millimeters to make entry and exit into the car easier.

When combined with Audi’s “pre sense 360°” system, the predictive active suspension also increases the Audi A8’s passive safety function. In an impending side impact at speeds exceeding 25kph, the active suspension raises the body by up to 80mm on the side of the impact. This brings the car’s sill into a better position to absorb the impact energy. 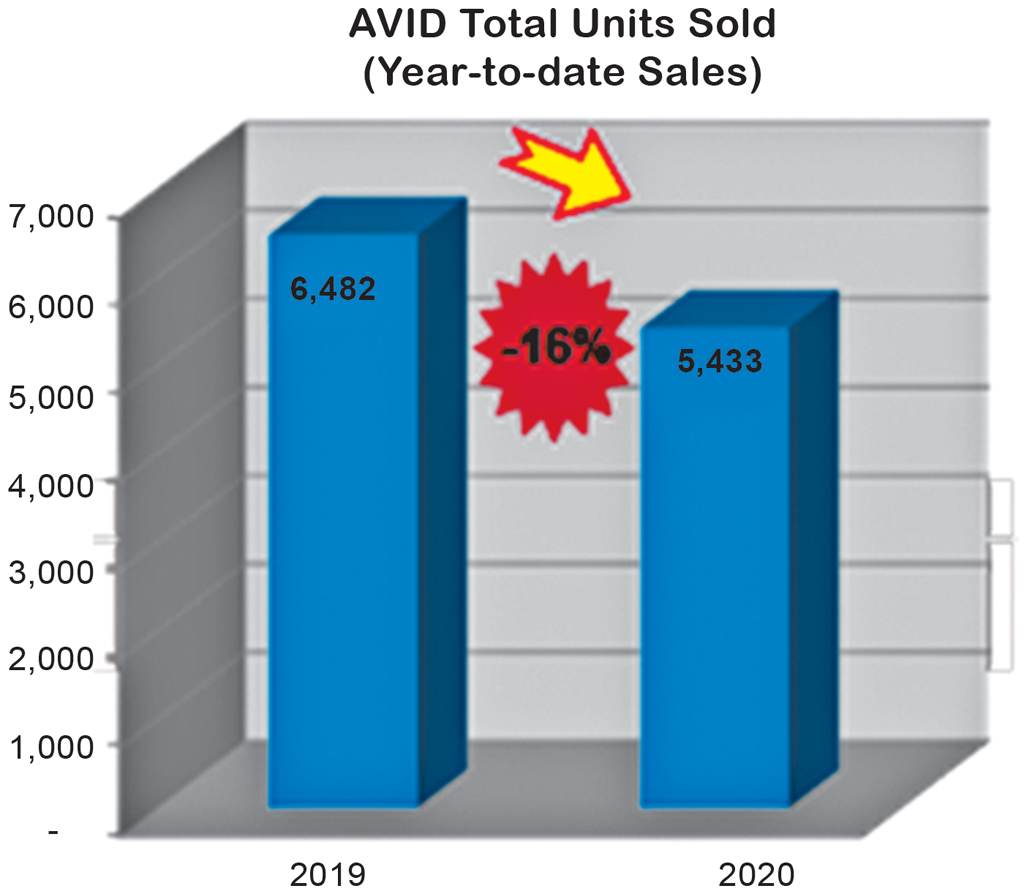 THE 25-member companies of the Association of Vehicle Importers and Distributors, Inc. (AVID) collectively sold 5,433 units in January — 16% lower compared to the same month in 2019. The dip was attributed to the “challenges posed by the Taal Ash Fall followed by the COVID-19 situation which is beginning to affect many local industries, including the automotive sector.”

AVID President Ma. Fe Perez-Agudo said in a release, “(Year) 2020 will be very challenging for the industry given the slowdown in automotive demand, supply chain disruptions, and dampened consumer confidence caused by these twin events. Fortunately, the Philippine economy remains strong, backed by robust public spending, private consumption, and lower interest rates… I am confident that AVID members will adapt to, and hurdle, these challenges and bounce back even stronger in the coming months.”

AVID members also reported lower sales in the light commercial vehicle (LCV) segment, recording a 7.3% dip for the month with 3,855 units sold versus the 4,157 units sold in the same period last year. Ford paces the LCV segment with a total of 1,375 units sold. Suzuki is second with 1,122 units, and Hyundai is third with 1,053. The commercial vehicles (CV) segment saw a decline of 63% in January.

Still, Ms. Agudo remains bullish. “We are no strangers to adversity and disruptions. As we have done in the past 10 years of AVID’s existence, our members remain resolute to provide better vehicles, better services, and better customer experiences to Filipinos everywhere,” she stressed.

SEAOIL PHILIPPINES, INC., the country’s leading independent fuel player, has signed an exclusive partnership with transport network vehicle service (TNVS) company Owto for the co-branded Seaoil Boosted VIP card to be given to the latter’s drivers.

Said Seaoil Philippines VP for Corporate and Consumer Marketing Jayvee Dela Fuente, “Seaoil continues to form new partnerships so more consumers, especially those in the TNVS industry, can enjoy more benefits when they purchase (our) products.”

Owto is a 100% Filipino-owned TNVS company owned and operated by Ipara Technologies and Solutions, Inc. The service is available in the Greater Metro Manila (GMA) area, Caloocan, Malabon, Navotas, Valenzuela City and in some parts of Rizal, Cavite and Bulacan.

The Boosted VIP cards issued to Owto drivers will have the highest level in the VIP card tier or Auto-Gold status. One VIP point is equivalent to one point. The cards will have an exclusive point conversion wherein P100 in gasoline purchase earns four points, or a P4.00 rebate. A diesel purchase of P100 earns two points or a P2.00 rebate. Earned points can be used to purchase fuel and lubricants from Seaoil and may be redeemed as cash.

The exclusive point conversion is available at select Seaoil outlets, while other stations not included in the list will offer the regular Seaoil VIP point system.

THE “MG LIVE!” free concert series powered by Phoenix Pulse Technology made its first stop in 2020 in Cebu this weekend, as MG Philippines continues its drive to showcase the best OPM talents.

This year, MG Philippines is going national with “MG Live!” as it brings the series to key locations around the country. Said company President and CEO Atty. Alberto Arcilla: “MG Philippines had a breakout year in 2019 and we want to make sure that we give the public bigger and better offerings in 2020… After just over a year in the market, MG has humbly and gratefully earned a place in the minds and hearts of the Filipino motoring market, in no small part because of the positive public response to these modern, attainable, British heritage cars. On MG’s second year in the Philippines we bring MG Live! around the country, specifically to regional locations where we can interact even more closely with those who have shown such genuine interest and support for the MG brand.”

Aside from the concert at the SM City Cebu North Wing, MG Philippines displayed the full lineup of vehicles currently available. These include the MG ZS Crossover SUV; the spacious and versatile RX5 SUV; the sporty MG 6 Fastback sedan; and the brand’s latest offering, the MG 5 sedan — a class leader in its segment that is big in both features and comfort.

The MG Live! 2020 stage was graced by Spongecola, the four-piece OPM alternative rock band behind crowd favorites such as “Jeepney,” “KLSP,” “Bitiw,” “Puso,” “Tambay,” and many more.