MG PHILIPPINES sold a total of 5,085 vehicles on its first year of operations — averaging 400 units a month — led by the MG ZS crossover SUV, which accounted for over half of MG sales here in 2019.

The company also launched three more all-new models last year: the RX5 SUV, the MG 6 Fastback sedan, and the new MG 5 sedan. The last is said to be a “class leader in its segment that is big in both size and features.” MG in a release said that its “vehicles continue to grow in popularity among Filipinos because of their high value-for-money proposition, attainable prices, modern driving aids, and safety features, all while being backed by a rich British heritage.”

Owners can also download the My MG mobile app on Google Play for Android, allowing them to easily schedule vehicle servicing appointments, make parts inquiries, and locate nearby MG dealerships. The app can also be used to book a visit from a Mobile Garage service caravan providing MG owners with vehicle home service for major technical issues. MG Hero Services, on the other hand, provides 24/7 roadside support through the MG Philippines hotline (+632 5328-4664).

Marketing campaigns in 2019 will roll out once more in 2020 such as the MG Live! free concert series, participation in the 2020 Manila International Auto Show (MIAS), and involvement in major sporting events in the UAAP and with popular mixed martial arts entity ONE Championship. MG promises to be “present in various mall roadshows and test drive events all over the country.”

MG Philippines last year received awards as well: Best Subcompact SUV (MG ZS) at the 15th Annual C! Awards, the Best Value for Money Compact Sedan of the Year (MG 6) at the 2019 Auto Focus People’s Choice Awards, and the 2019 Breakout Brand of the Year at the 2019 Top Gear PH Awards.

“We at MG Philippines are thankful to our clients, our executive committee, dealer partners, media friends, our partners from SAIC Motor International, our bank partners, and the numerous agencies who worked with us, for making 2019 such a breakout year for the brand,” said president and CEO Atty. Alberto Arcilla. “We have exciting things in store for 2020 and we eagerly enter this new year and decade with renewed anticipation and excitement, bolstered by all the positive indicators we received in the past year.” 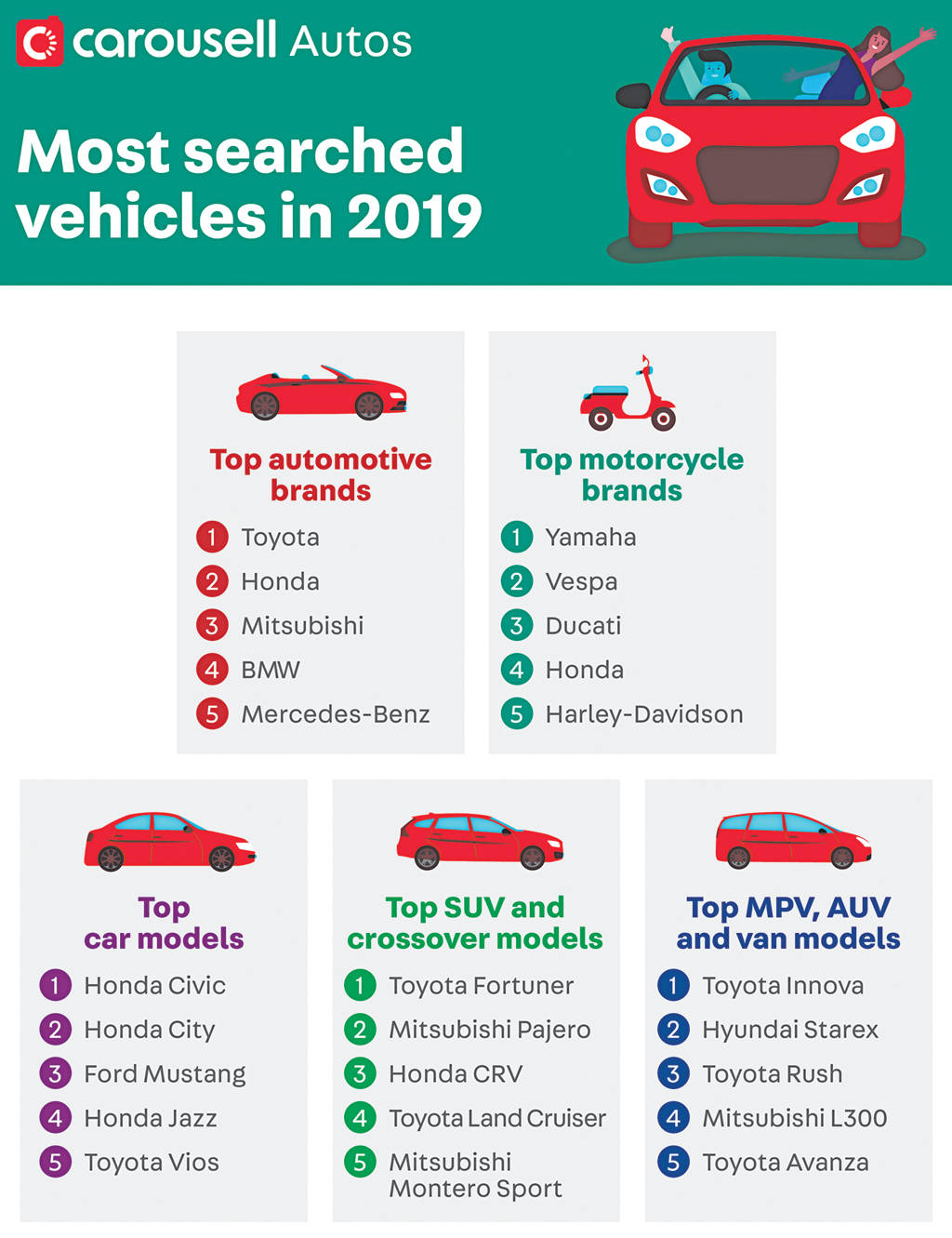 What cars did you look for on Carousell last year?

In a release, Carousell said “it is not surprising that Toyota is the most dominant automotive brand in the Philippines” as the brand has become the perennial winner of the so-called “triple crown award” — leading in passenger car, commercial vehicle, and total vehicle sales. “Its popularity among second-hand buyers resonates very well as shown by its leading selection on Carousell in 2019.”

According to the platform, the most sought-after sport utility vehicles for 2019 are the Toyota Fortuner, Mitsubishi Pajero, Honda CRV, Toyota Land Cruiser, and Mitsubishi Montero Sport.

“Carousell places a high premium on optimum user experience satisfaction whenever our customers use our platform to search for a vehicle that perfectly suits their specific needs,” shared Carousell Philippines autos head Karl Magsuci. “That is why we always ensure that our listings offer the widest selection of vehicle and price options to a full range of buyers.”

Meanwhile, last year’s top motorcycle searches on Carousell include Yamaha, Vespa, Ducati, Honda, and Harley-Davidson. “Carousell’s automotive platform is ready to cater to the motoring needs of the Pinoy auto lovers, whether they are looking for used or brand new vehicles, parts and accessories, motorcycles, and even trucks and other special vehicles,” Magsuci added.

Carousell claims to make “selling as easy as taking a photo, buying as simple as chatting.” The platform now has over 250 million listings, and is said to be one of the world’s largest and fastest growing marketplaces in Southeast Asia, Taiwan, and Hong Kong. It is backed by Telenor Group, Rakuten Ventures, Sequoia Capital, Naspers, 500 Startups, Golden Gate Ventures, DBS, and EDBI. Carousell features a diverse range of products across a variety of categories, including cars, lifestyle, gadgets and fashion accessories. The free app is free for download on iOS and Apple devices. For more information, visit www.carousell.com and www.carousell.ph.

VETERAN ENTERTAINER Gary “Mr. Pure Energy” Valenciano is the newest brand ambassador of Volkswagen Philippines, and the partnership is set to be presented to the public during VW Philippines’ “We Move You” campaign on February 22 at the Activity Center of Trinoma in Quezon City.

In a release, Volkswagen Philippines described Valenciano as “the most recognizable total performer in Philippine show business. For over 34 years, he has made his indelible mark in the music, recording, film and television industries. Any production or entertainment number that features Gary V in it is guaranteed to inspire audiences to move, and be moved.”

The partnership is said to be a perfect collaboration between the two “movers” and game-changers in their chosen fields. Volkswagen said its “timeless designs, German engineering and performance, and security and safety in its vehicles — embodied in its flagship executive sedan the Lamando — jives in perfect rhythm with Gary V’s versatility, his ability to adapt to the times and performance levels, and his quiet sense of elegance and class that appeal to a wide mass of audiences.”