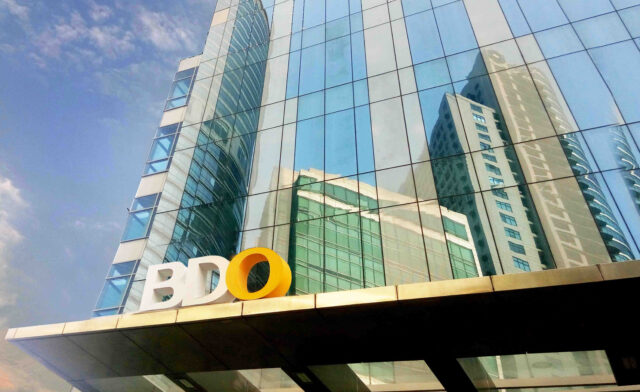 A total of 3.89 million BDO shares worth P503.49 million were traded from April 11 to 13, data from the Philippine Stock Exchange (PSE) showed, making it the seventh most actively traded stock in the market.

Local financial markets were closed on April 14 and 15 in observance of the Holy Week.

Since the first trading day of the year, the stock’s price has risen by 7.1%.

“Investors lock in profits ahead of a long weekend to protect their gains just in case something unforeseen happens to the stock or the economy in general, which I think explains the market’s behavior on BDO this shortened trading week,” said Regina Capital Development Corp. Head of Research Luis A. Limlingan in an e-mail interview.

“It’s fundamentally good news for long-term investors,” she said. “However, pullback or correction is normal for the stock to move higher after the previous week’s indecision.”

Latest Bangko Sentral ng Pilipinas (BSP) data showed that the Sy-led bank remained the largest lender in the country in terms of total assets with P3.48 trillion in the final three months of 2021. This was 7.1% higher than the previously logged P3.25 trillion in the same period in 2020.

In terms of capital, BDO recorded P423.39 billion while deposits were P2.75 trillion.

Mr. Limlingan said that market players might have anticipated BDO to keep its crown as the largest universal and commercial bank in the country, that’s why the stock endured a series of profit taking in February and March.

“My thinking is that investors are just looking for a more attractive price level before jumping right back into BDO, since it has recently played at a premium to its short-term moving average for a quite a while.”

Ms. Telagen expects the bank’s bottom line in the March quarter to end at P11.5 billion, and the full year at P47 billion.

As BDO continues to dominate, this is already a good thing market players should consider, Ms. Telagen said.

“However, as cryptocurrencies continue to grow and some big players might be offering crypto (e.g., GCash and Paymaya), I think it will be better if they will be a crypto-friendly bank as well,” she added.