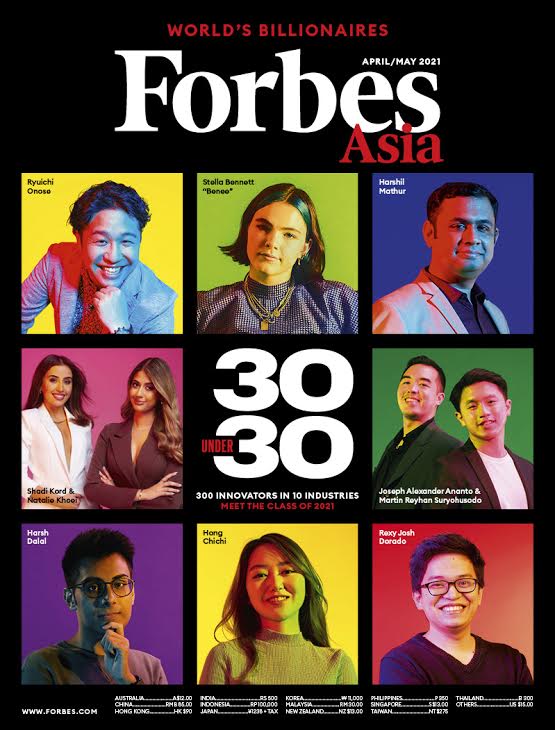 Seven Filipinos landed in this year’s Forbes 30 Under 30 Asia list, which highlights millennial and Gen Z leaders who persevered and thrived despite global uncertainty.

“We’re honored to be recognized by Forbes and, above all, excited to be a beacon for the potential of the global Filipino community and its creative and economic power,” said Mr. Dorado, who is featured on the cover.

The criteria for making the list include their demonstration of leadership, how they embody the entrepreneurial spirit synonymous with Forbes, and their potential of success in their industry. Other factors like innovation, disruption — and size and growth of their ventures in some categories — also play a role.

“From a Filipino entrepreneur re-imagining social media platforms to a fintech unicorn founder and a group of Afghan teenage girls developing a low-cost ventilator to help fight the virus, these trailblazers are truly unstoppable,” said Rana W. Watson, Forbes 30 Under 30 Asia editor.

The average age of Asia’s under 30s list is 26.4 years. Eighty-three percent consider being under the age of 30 an advantage in their career.

Thirty honorees were selected in 10 categories: the arts; entertainment and sports; finance and venture capital; media, marketing and advertising; retail and e-commerce; enterprise technology; industry, manufacturing and energy; healthcare and science; social impact and consumer technology. This year’s class was chosen from 2,500 nominations, researched by Forbes journalists from across the region and vetted by industry veterans.

Of the 300 honorees on the list, 17 have startups that have managed to secure over $15 million in funding each. One of these is Razorpay, which became the latest fintech unicorn to come out of India, and is valued at $3 billion. India is the most represented on this year’s list, with 76 members in total.