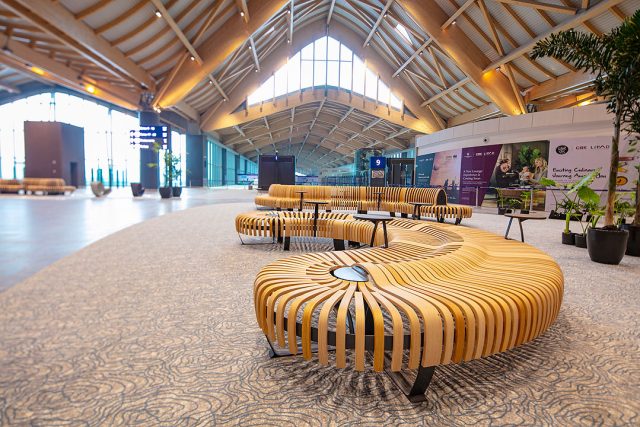 LUZON INTERNATIONAL Premier Airport Development Corp. (LIPAD), the company that manages the operations and maintenance of Clark International Airport, is hoping to open the new passenger terminal building for commercial flights by the fourth quarter.

“We are completing some finishing works; but basically, what’s happening now is what we call a very strict operational readiness for airport transfer…  That means there are a lot of testing and commissioning, [and] a lot of trials in our stakeholders,” LIPAD Chief Executive Officer Bi Yong S. Chungunco said at a virtual briefing on Thursday.

“Hopefully, we’ll finish by Q4 (fourth quarter), and Q4 is quite near. We want to start really before Christmas,” she also said.

The new terminal building — built by Megawide Construction Corp. and GMR Infrastructure Ltd. — is one of the top six finalists in the 2021 World Selection of the Prix Versailles Architecture and Design Awards under the Airport Category.

On its website, the Prix said it recognizes the “most remarkable structures” in the world “in terms of both interior and exterior architecture.”

“This nomination is a recognition of the outstanding qualities of Clark International Airport — even with the fluidity of its state of art technology, this airport reflects a deep sense of place as it takes inspiration from the natural formations and surrounding landscape,” Ms. Chungunco said.

“Passenger experience was at the heart of this design. We believe the Philippines will be proud of Clark International Airport which draws on the energy of the local people and the environment as inspiration for the interior design and key feature installations throughout the terminal’s event spaces,” Ben Dawson, Populous architect, said.

The four-level building can accommodate eight million passengers annually, according to LIPAD. The Clark airport currently operates at an annual passenger capacity of 4.2 million.

LIPAD said winners will be announced in Paris later this year.

URCC ready to go anew when given the thumbs-up