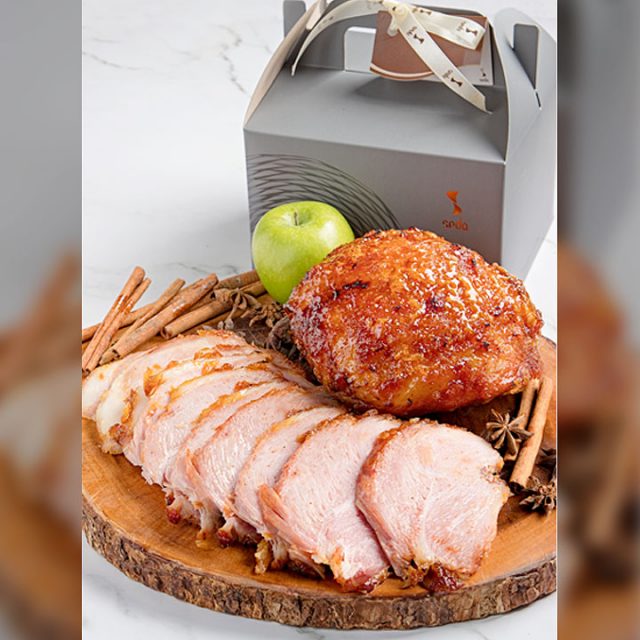 A READY-TO-EAT Christmas ham is already available in several Seda Hotel outlets —  though why wait for the holiday to enjoy it?

The hams were conceptualized a few years back by Seda Hotels Executive Chef Romualdo “Pepe” Castillo and Seda Hotels’ senior group general manager Andrea Mastellone as Christmas hamper fillers and corporate gifts. The project started out with a few hundred hams, but recently this increased to as many as 10,000 hams.

In a mixture of English and Filipino, Mr. Castillo said that people who used to order his ham said that their neighbors, relatives, and grandparents whom they had given hams to just couldn’t forget them.

During a press conference last week, Mr. Castillo talked about what goes into making his ham. Still, most of it was kept secret: the only thing Mr. Castillo revealed was that it is made from organic pigs not more than seven months old.

The pork, he said, is brined for a week in a special mixture, then carefully massaged every three hours to ensure the even absorption of flavors. It is then steamed and boiled with more secret ingredients before it is molded. Finally, it is glazed with the subtle flavors of freshly squeezed oranges, pure Palawan honey, and a sprinkling of sugar before being blow-torched to seal in all that goodness.

Asked about the proper way to prepare it, he said that it’s ready-to-eat, “like cold cuts.” As for baking and frying instructions, he says, “Init lang (just heat it).” Proud of his creation, he says, “It’s perfect (on its own).”

Seda Residences Makati Marc Cerqueda noted that Seda’s holiday ham is best savored with fine wines such as a dry pinot grigio or a rose. Consumed without its sauce, it goes well too with a pale Pilsen beer.

The ham lasts for six months in the freezer, though Mr. Mastellone warned, “If you open it, it lasts for a few minutes!” Not so much due to the ravages of time, but by ravenous hands.

DA still considering ASF in diseased hogs, but not ruling out other causes

Children aged 12 to 15 years to get Pfizer coronavirus vaccine