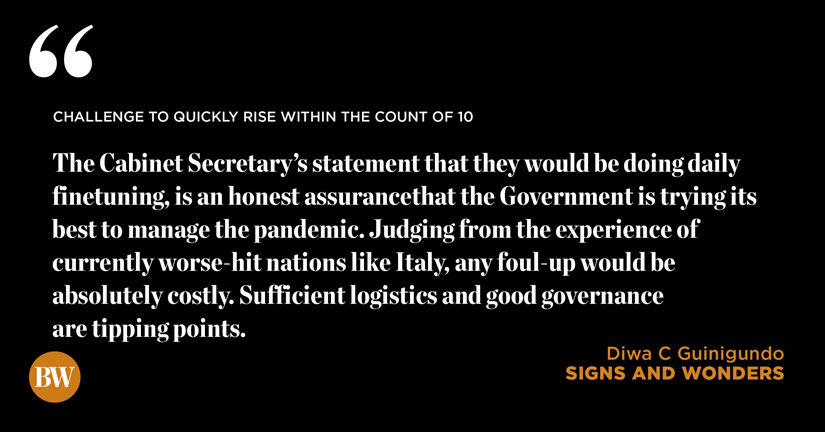 The Corona outbreak was declared a pandemic by the World Health Organization (WHO), describing it not just as a public health crisis, but one “that will touch every sector.”

In the face of this unseen adversary, one can only humble oneself and submit to a lockdown to contain its spread. Our old generation was called to war, we are called to just stay home.

What impact will the pandemic have on the Philippine economy? There are numerous possible outcomes if viral spread persists.

In the meantime, we can assess the economy’s resilience based on recent IMF advice. In its “Policy Steps to Address the Corona Crisis,” the Fund outlined five points to prevent “deep and prolonged economic effects.”

First, the outbreak must be monitored and contained. In this regard, the Philippines is under an extreme enhanced community quarantine. A lockdown. Travel is now restricted. Movement of persons is limited to establishments for basic necessities. With on-line ordering of groceries, food is more widely available. The Government earmarked nearly P30 billion to combat the impact of the pathogen although health and labor deserved larger shares. WHO and the Department of Health created social media channels for quick advisories. We expect the UP testing kits to be launched soon. Testing kits have also been donated by neighboring countries.

Second, central banks are called upon to support demand and raise confidence by easing financial conditions and ensuring market liquidity. The BSP has some space to ensure financial stability. Expected inflation in 2020 and 2021 are both below the current policy rate. Credit and domestic liquidity are growing. Given banks’ compliance with required capital and liquidity coverage, the Bangko Sentral ng Pilipinas (BSP) can afford to provide regulatory forbearance to banks with coronavirus-affected clients. On forward guidance, the BSP has revealed a preference towards easing. We maintain though that the BSP has room to be patient and conserve its ammunition. Easy monetary policy could abet capital outflows and lead to a weaker peso with inflationary consequences.

Third, an expansionary fiscal policy to support people and firms is prescribed. The Government has flexibility in this respect having previously announced an enormous stimulus package on infrastructure. The Finance Secretary has encouraged the GSIS and SSS to expand their investment portfolios by supporting the equities market during this challenging time. The Labor

Department has announced a P2 billion package to provide financial assistance to some 6,000 workers expected to be affected by enhanced quarantine. Public debt ratios have declined providing additional stretch to the fiscal space.

Fourth, regulatory and supervisory policies for financial stability, banking system soundness, and sustained economic activity are advised. In this connection, banks are allowed to renegotiate loans with affected borrowers instead of tinkering with loan classification and provisioning rules. This is something Philippine banks can do. Their prompt compliance with BSP regulations gives them headroom in allowing renegotiations. RRR has been reduced by 400 basis points, lowering the virtual tax on their deposits. Since last year, the policy rate has also been reduced a number of times while lending rates have remained high. This is the best time for banks to give back.

Finally, to recover from the crisis, the Fund emphasizes the importance of global coordination and cooperation. The problem with this is that it has yet to rally the market. In two weeks, the US Fed reduced its policy rate twice to 0-0.25 percent. It announced massive asset purchases amounting to some $500 billion and opened its discount-lending windows to banks and removed bank reserve requirements. It championed an orchestrated easing move with other monetary authorities through swap lines to support international supply of the world’s reserve currency. Despite the US Fed Chairman’s bold assurance that they have some firepower left, Wall Street plummeted in futures trading. President Trump may have flattened the political curve of the coronavirus with his $50 billion additional budget for healthcare system, but this was not enough to inspire Wall Street.

On the basis of the IMF checklist, there are good signs that the Philippines could weather this healthwind. But additional granularity is needed.

First, while there are general principles of a lockdown, implementing guidelines appear raw. There is dissonance between the national authorities and local governments, with local governments pursuing various, sometimes conflicting, approaches. The Cabinet Secretary’s statement that they would be doing daily finetuning, is an honest assurance that the Government is trying its best to manage the pandemic. Judging from the experience of currently worse-hit nations like Italy, any foul-up would be absolutely costly. Sufficient logistics and good governance are tipping points.

Second, mitigating the impact on both workers and their employers is crucial. It is market positive that the business and banking sectors have committed to pay the working class their wages during the lockdown, advance their allowances and bonuses, support their medical bills in case of infection, postpone collection of rentals in closed malls and extend deadlines for debt servicing. Moral hazard should not weigh heavier than the cost of actual labor displacement and the disruption of business operations at this time. These emergency measures are all time-bound. They are temporary.

Third, public health resources are limited and should be augmented. It is not responsible to elevate public expectation for a higher budget allocation for everybody. While we have fiscal space, our legislators can do better than call for over a hundred billion of additional stimulus spending. Secretary Dominguez’ statement that, “we have enough but limited resources, so our job is to make sure that we have sufficient funds for programs mitigating the adverse effects of COVID-19 on our economy,” is well-grounded.

Finally, no one should forget that one of the major effects of the outbreak is a rethink of business strategies across North America and Europe. Management consultants are beginning to talk about diversifying supply chains away from China and a strong possibility of re-shoring of business operations including contact centers and software development. This will be challenging for many emerging markets including the Philippines.

All up, the virus knocks down every economy it hits. The challenge is to avoid a knockout by quickly rising within the count of 10.