At the beginning of the year, many were looking forward to a very productive stock market.The coronavirus disease 2019 (COVID-19), however, has brought these expectations down.

This has been the observed sentiment among the panelists in the third leg of the phase 1 of BUSINESSWORLD INSIGHTS held last May 13. Moderated by BusinessWorld’s research head Leo Uy, the online forum had Ramon Monzon, president and chief executive officer (CEO) of the Philippine Stock Exchange (PSE); April Lynn Tan, CFA, vice-president and head of research at COL Financial; and Japhet Louis Tantiangco, senior research analyst at Philstocks Financial, Inc., in the panel.

While the panel recognized the drastic impact of COVID-19 on the stock market, they shared insights on where it can be headed to, as well as what investors and traders can do in order to deal with the present crisis. 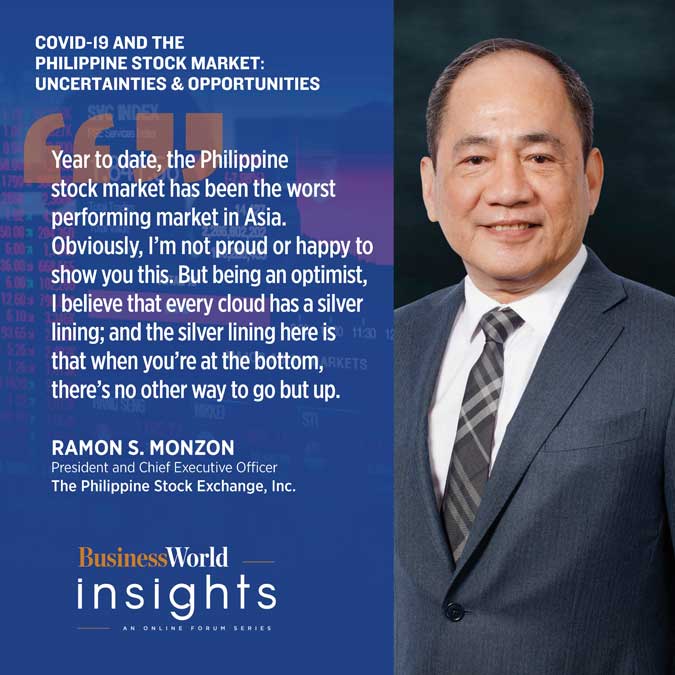 Mr. Monzon shared that at the start, the PSE was eagerly looking forward to a very good year, especially with the rules and regulations on real estate investment trusts (REITs) set in place.

The COVID-19 pandemic as well as the imposed Luzon-wide lockdown, however, have lowered this anticipation, as he pointed out in the market drop earlier in March.

“The market drop this year was so sudden and steep, resulting in PSE’s circuit breaker being triggered three times in one month alone: on March 12, 13, and 19,” he said.

In spite of the situation, however, the PSE president and CEO finds certain ‘silver linings’ that give the market hope.

“[A]n optimist will note one thing positive,” he said regarding the market drop. “That is the index has gone up 22.2% from its lowest close reach.”

Even as he found that the Philippine stock market has been the worst-performing market in Asia, Mr. Monzon remains optimistic, stressing that “when you’re at the bottom, there’s no other way to go but up.”

While he finds no silver lining in the drop of average value turnover to 12.8% last year, coupled with the decline in trading activity for April and May to more than the five billion level, Mr. Monzon finds one in the contribution of foreign selling (from net selling amount of 14.3 billion in 2019 to a “staggering” 52.5 billion in May 2020) to the big drop in the market.

“Local investors apparently have taken up the slack left by foreign investors in the market,” he explained. “For 2019, local investors accounted for 44.6% of the trading volume. Now, they account for 46.8%”

Increased local participation augurs well for the market, he stressed, as it will leave the market less vulnerable to the political or economic issues or events in the international arena.

Mr. Monzon further expressed his optimistic outlook for the market as he looked back at previous crises that have gravely impacted the market, namely the Asian financial crisis in 1997, the political crisis between late 2000 and early 2001 when there was a change in the president, the dot-com bubble in 2001, and the global financial crisis in 2008.

In one month’s time, he nonetheless stressed, the market recovered 43%. “We’ve been able to always recover and even reach higher levels after we recovered,” he concluded. 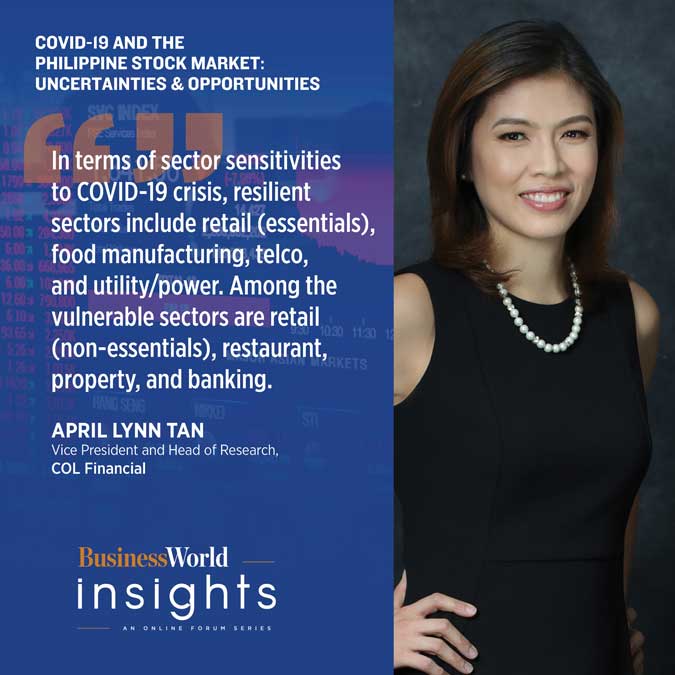 COL Financial’s Ms. Tan probed the stock market’s performance, especially its strong rally after hitting its low to reaching 5,651.67 on May 12.

She attributed this rally to the peaking of the number of cases, the showing of possible treatments to COVID-19, as well as the aggressive activity of central banks, especially the United States’ Federal Reserve.

This rally, however, is not expected by Ms. Tan to be sustained as she found that COVID-19’s economic impact will be severe, the valuations of stocks are cheap albeit still far from past bear market bottoms, and foreign investors remain net sellers.

“Our first quarter GDP was down 0.2%, disappointing a lot of investors and economists,” she explained on the economic impact. “Only government spending was strong. It was not even that strong. Going forward, we will still see household consumption and investments and exports remaining weak.”

The COL Financial executive advises investors to not chase prices and to buy slowly, since there is an apparent temptation to throw caution to the wind in a strong market.

“While the market’s going up, you stay on the sidelines and wait for them to go down again and buy,” she continued. “When you buy today, think long term. I don’t think you should try to make gains in the short term, or expect to be profitable right away.”

She also suggests diversifying and limiting one’s size to an amount which they should be ready to hold on to.

She also recommends sticking to resilient sectors at present, which include retail(essentials), food manufacturing, telecommunications, and utility/power.

On the other hand, she finds the retail (non essentials), restaurant, property, and banking as the vulnerable sectors.

For Ms. Tan, indicators that would point to the new normal will serve as the main catalysts that will help the market bounce back from the crisis. These indicators include a vaccine that will treat COVID-19 and herd immunity.

Climbing from the slide 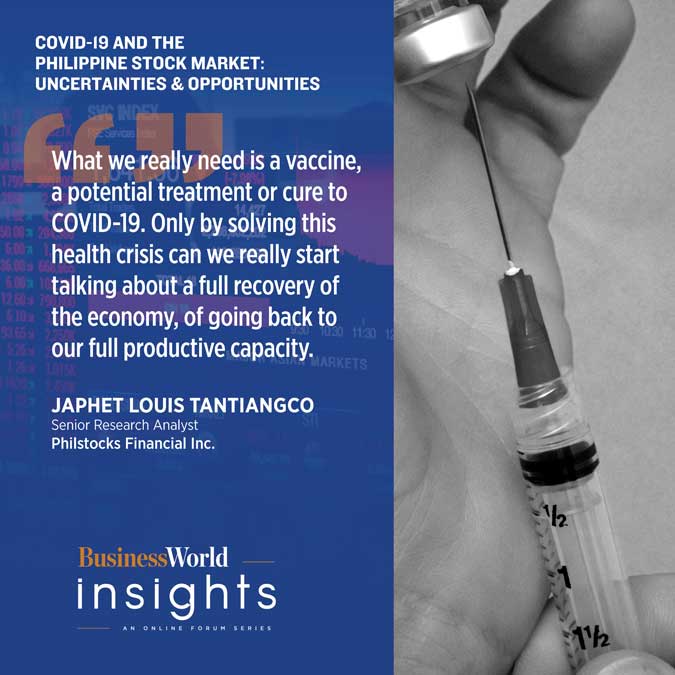 “The precipitous slide…will have a lasting impact on market psychology. Most investors, especially new ones, would choose to shy away from the market or either secure gains as quickly as possible as per the principle of loss aversion,” he later noted.

As the market entered the year with mixed narratives like the initial deal between US and China and fears experienced from regulatory risks, it maintained a sideways movement until COVID-19 came, he added.

“This pandemic and its expected adverse effects to the economy, which we already saw in the first quarter GDP, has brought us down year-to-date by about 50%. It’s almost a 50% decline in less than a quarter,” he said.

The market’s recent rally was also pointed out by Mr. Tantiangco, as it tried to bounce back from its bottom of a little above 4,600 and reached a high of a little above 5,900. He attributed this to the government’s efforts in curbing the economic impact of COVID-19, among other factors.

Another decline was observed, however, which is found to be giving the market a hard time breaching the 5,700 resistance level.

“To add insult to the injury, we’ve already broken below the lower bound of that uptrend channel, which is a bearish signal, indicating that in the near future, we would likely have a consolidation within that 5,300 to 5,700,” he added.

In comparison to previous crises, the senior research analyst finds the COVID-19 unique in being both a health and economic crisis.

“[When] before, we were only dealing with one problem…right now we’re getting hit by a twin dagger,” he said. “This calls for, of course, two solutions: the health solution and the economic solution.”

Given the situation, Mr. Tantiangco advises going back to the core guiding principles of the market.

“[T]here will always be opportunities as long as we employ the right strategies and manage our risks well and stick with the core principles, becauseat the end of the day, they are what matters most,” he said.

He also hopes that investors and traders have taken the opportunity to learn in terms of managing risks; to cut losses when needed; and to throw away market psychological biases such as overconfidence, herd mentality, and loss aversion.

Moreover, he recommended sectors to look into under three categories: companies whose products have elastic demand; companies that enjoy a lesser degree of competition; and stocks with silver lining opportunities, considering the new normal amplifying “a louder call for the use of digital space” for online transactions like e-commerce and e-learning.

“Those companies which will be able to find opportunities out of these, they will likely be the new favorites of the market, so just watch out for them,” he noted.

The phase 2 of BUSINESSWORLD INSIGHTS will tackle “Winning the Fight: COVID-19 Lessons,” starting May 27. The online forum can be viewed in the Facebook pages of BusinessWorld and The Philippine STAR.