The deep impact of the coronavirus disease 2019 (COVID-19) pandemic to the economy has been widely observed and discussed around the world. As the fight against this crisis continues, both the global and local economic situation, as well as the outlook upon the end of the crisis, is gradually being unraveled.

Keeping this conversation going, the first iteration of BUSINESSWORLD INSIGHTS: An Online Forum Series, held last April 29, shed light on the current situation of the Philippine economy in light of the present crisis and the direction it is headed to when the dust of the pandemic settles.

Moderated by BusinessWorld editor-in-chief Wilfredo Reyes, the forum gained insights from Antonio Lambino II, assistant secretary of the Department of Finance (DoF); Souleymane Coulibaly, World Bank’s lead economist and program leader for Brunei, Malaysia, Philippines, and Thailand; Benedicto Yujuico, president of the Philippine Chamber of Commerce and Industry (PCCI); and Calixto Chikiamco, co-founder and president of the Foundation for Economic Freedom (FEF) and a columnist for BusinessWorld. 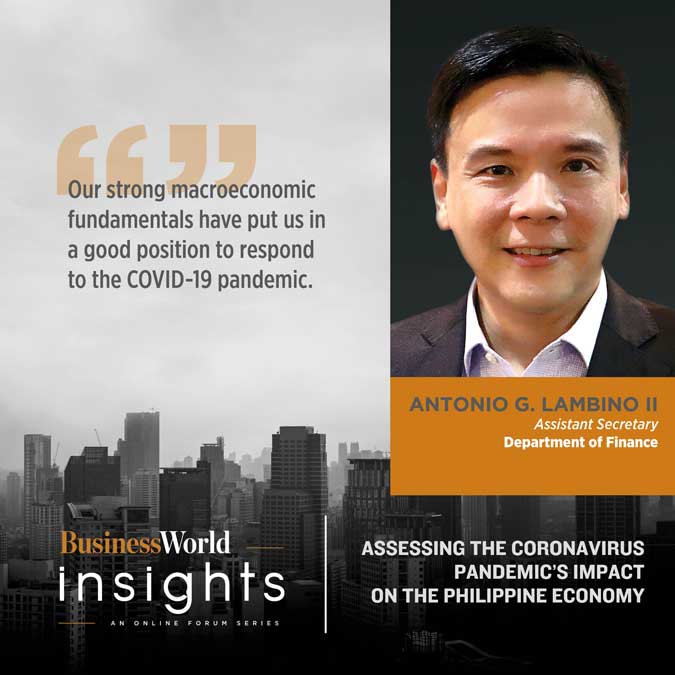 Talking about the government’s initiatives in helping the economy, Mr. Lambino initially pointed out that the most urgent priority for the present administration is to save lives and protect communities amid the ongoing pandemic.

Their action plan to achieve these, he added, is outlined in the administration’s 4-Pillar Socioeconomic Strategy, namely: to support vulnerable sectors through emergency support initiatives; to marshall resources to help the Department of Health (DoH) and frontline healthcare workers fight COVID-19; to take fiscal and monetary actions to finance emergency and short-to-medium term initiatives to keep the economy afloat and; to formulate and implement an economic recovery plan to create jobs and sustain growth.

The DoF assistant secretary also pointed out that strong macroeconomic fundamentals have put the country in a good position to respond to the pandemic, citing recent economic figures such as the 5.9% gross domestic product (GDP) growth in 2019 and the annual GDP growth of 6.4% from 2016-2019, among many others.

“We attribute these strengths to the economic and fiscal policy continuity from one administration to the next, and to President Duterte’s conservative approach to fiscal and economic policy,” Mr. Lambino added.

When asked when the Development and Budget Coordination Committee (DBCC) will finalize new macroeconomic assumptions, Mr. Lambino said that such decisions are continuously being deliberated, since the decisions they are faced with are not only economic but are also ethical and moral.

“It’s not just about the economic slowdown; it’s also about how many people will get infected as we open up. Slowly, in a moderate way, or in a quick way? How many people will die after getting infected? What is the mortality rate? What are the estimates given various scenarios?” he explained.

The decisions the economic team and the administration have to make, he pointed out, should be driven by science and informed by data.

“We need to make sure that the effectiveness of our response in terms of this economic recovery plan depend on the accuracy of our diagnosis,” Mr. Lambino said. “That’s why we are trying to understand the needs of the business sector as much as possible as we craft this response plan.”

He also added that the plan to be implemented will have a focus on infrastructure “to improve the connectivity backbone, both physical and digital”, coupled with continued investments on social programs and a transformation of the education system “to operate and educate youth under a new normal”

Addressing and preparing for ‘shocks’ 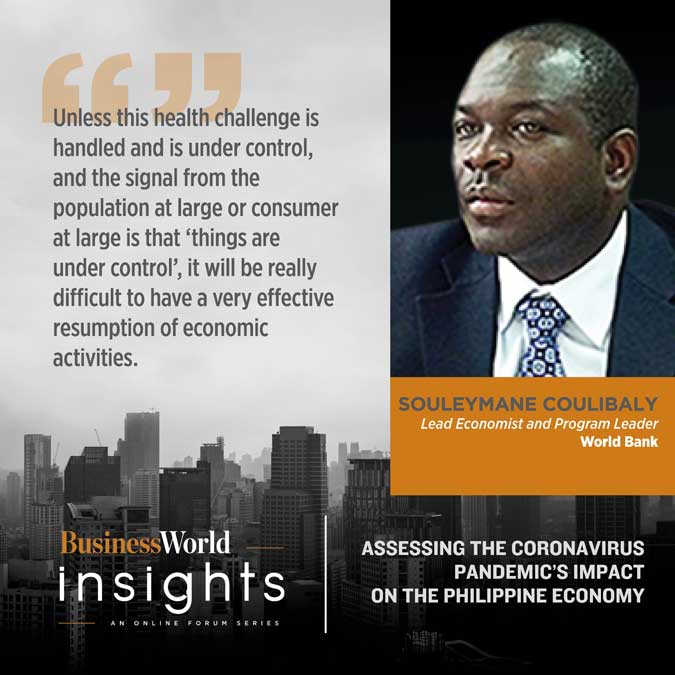 The several shocks brought by the pandemic was highlighted by Mr. Coulibaly of World Bank. He stressed that the crisis has brought a ‘supply shock’ to the Philippine economy, and it consequently ushered in a ‘demand shock’.

Measures to suppress or contain the propagation of the virus such as travel bans, social distancing, and lockdowns, Mr. Coulibaly added, have also contributed to this ‘supply shock’ as they directly affect the production of some sectors that are currently deemed nonessential.

“The immediate impact of this supply shock is an incoming shortfall of workers and entrepreneurs that can aggregate into a demand shock,” he further explained.

To address these shocks, Mr. Coulibaly said that the health crisis has to be put under control in the first place.

“The longer it takes to address the health crisis, the deeper the combined supply and demand shocks might be, with the additional risk of the stability of the financial sector weakening,” he said.

The lead economist added that the pandemic provides an opportunity for the Philippine economy to accelerate its move towards digitalization, “which would, in turn, improve the aggregate productivity of the economy over the medium term.”

For Mr. Coulibaly, the current crisis is also teaching countries a big lesson on preparedness, specifically in terms of the health system, continuity of businesses, and “securing monetary and fiscal space” in policymaking.

“By strengthening its preparedness, I think the Philippines will be ready for the big shocks that will come in the future,” he said. 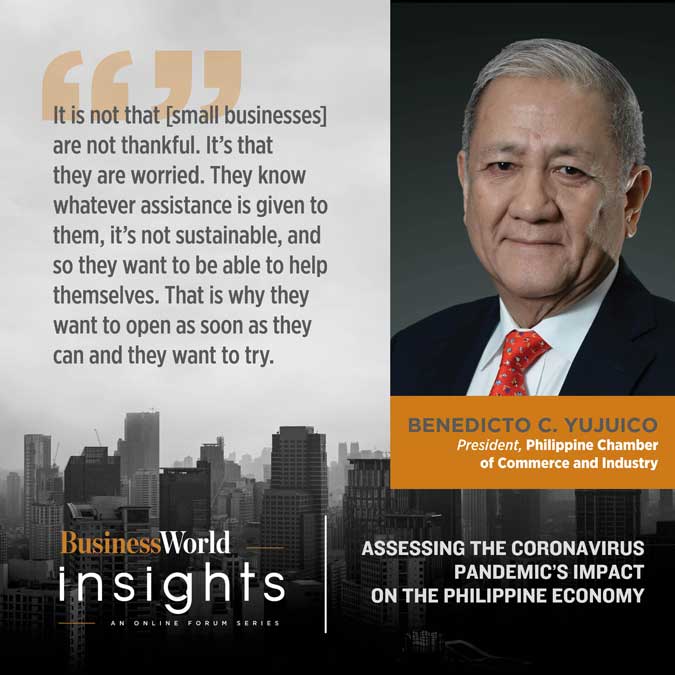 For Mr. Yujuico, the pandemic is forcing businesses to explore all possibilities to overcome the impacts of the crisis due to quarantine regulations.

Small firms are expecting from the government drastic measures concerning financial assistance as the health crisis alters the economy, he added.

“In the short term, our members are requesting support in the forms of tax breaks and loan assistance and a review of processes to accelerate the movement of goods,” he said.

Mr. Yujuico also observed that while MSMEs are very thankful for the avowed support of the government, they are much aware that this assistance will not be sustainable in the long run.

This pandemic, according to Mr. Yujuico, should teach the country to work together in fighting an enemy they cannot see.

“Each and every Filipino must realize that we have a common enemy to fight, and to win this war we have to act as one and be united as a nation to achieve a common goal,” he said. “If we do this, I think we will overcome.”

Moreover, he proposes that strong incentives be given to health professionals in order to keep them from going abroad to seek employment opportunities and fulfill their dreams.

“If we have all of these health workers here, the Philippines will be better able to cope with whatever pandemic there is,” he said.

Mr. Yujuico also raised the need to utilize technology and innovation to address this kind of crisis, such as in implementing a national citizen registration system, using artificial intelligence for contact tracing and early hotspot risk detection, and taping on big data for national monitoring of health statistics.

“We do have the young people now in our country that know how to do this,” he added. “So it is the challenge of the private sector and the government to try to find who these people are, utilize their talents, and put them to good work.” 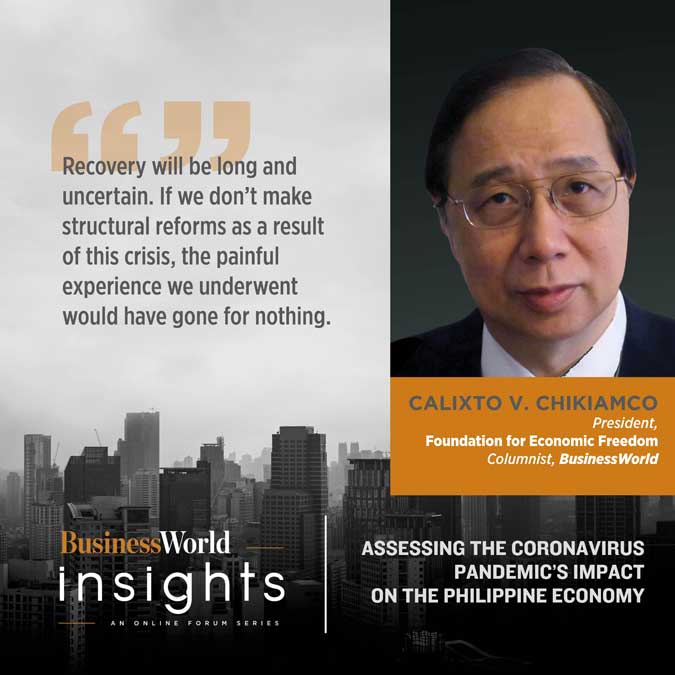 Pushing for structural reforms and collaboration with the private sector are some of the notable points from Mr. Chikiamco regarding the government’s move in helping the economy bounce back.

For him, the weakness of institutions in implementing a strategy to counter the effects of the crisis is in face aggravating it. He cited as an example the lack of a national ID system, which could have made the distribution of social amelioration funds easier.

“If we don’t make structural reforms as a result of this crisis, the painful experience we underwent would have gone for nothing,” he said.

Commenting on the Balik Probinsya program that proposes to bring people back to their provinces in order to decongest Metro Manila, Mr. Chikiamco stressed that if the program will be successful there should be jobs in the countryside.

The FEF co-founder and president also emphasized that the private sector could be trusted to behave responsibly when businesses reopen, “especially that they want to protect their own workers and also make sure that they do not endanger their customers.”

Upcoming BUSINESSWORLD INSIGHTS legs will discuss“Understanding the ‘New Normal’ for Businesses after the COVID Crisis” on May 6; and “COVID-19 and The Philippine Stock Market: Uncertainties and Opportunities” on May 13.

Just how many airports does the National Capital Region really need?

The race to get the power industry ready for imported LNG