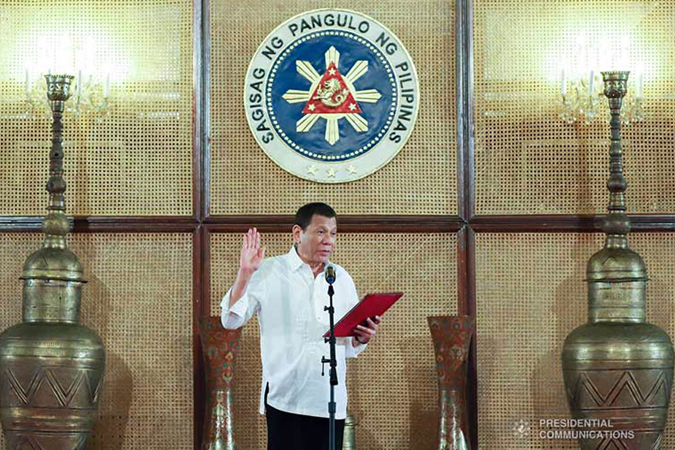 Perhaps his dosage of the powerful pain killer Fentanyl has peaked, because it looks like President Rodrigo Duterte has gone on a wild rampage of using his powers to demonstrate his machismo against icons in business and international politics. First, it was against the water concessionaires: the Ayalas’ Manila Water and Metro Pacific’s Maynilad Water. This was followed soon enough by his foreign policy statement when the US visa of his friend Bato de la Rosa was canceled, that he would abrogate the Visiting Forces Agreement, a part of the Mutual Defense Treaty with the United States of America. Rappler, the online independent media company, continues to be under threat. And now, it is the ABS-CBN franchise which he has vowed to cancel.

Does the State really have valid public interest issues against these icons, or is Duterte just playing to his voters’ love for his iconoclasm? Or, is he just venting his resentment at those who failed to support his presidential campaign?

The demagoguery seems to be working because Rodrigo Duterte’s popularity is consistently high. After all, majority of the voters are poor, deprived, and most likely feeling powerless. I guess he enables them to feel part of his bombastic iconoclasm.

The massive popularity is enabling our President to rule as a “government of men” rather than of laws. Correction, government of “man.” Sadly, this hero posturing is working because there are hardly any objectors or critics among public figures, politicians and civic leaders alike. There seems to be an epidemic of meekness and obsequiousness. Government officials, elected or appointed, seem to be second guessing what the President wants them to say or do. Or else, choose to remain silent.

Fortunately, once in a while, the Presidential spokesman attempts to reinterpret the President’s impulsive announcements to soften the blow, or allow options in legislative or executive action by the President’s minions. Often the reinterpretation is in contradiction of the actual statements. But this has become SOP. The public has become so inured to this kind of double talk that we are in danger of becoming insensitive to the difference between truth and lies.

The minority in the Lower House has raised hell against the Executive branch’s intrusion into their territorial imperatives. The Constitution says that only Congress can grant, extend, or cancel public franchises. The opposition claims that 85 of the Lower House representatives are for extension of the ABS-CBN franchise. Is this the reason why SolGen Jose Calida, the President’s dependable “fixer,” has filed a quo warranto petition before the Supreme Court seeking to cancel the ABS-CBN franchise? This government has already successfully resorted to quo warranto when it expelled Maria Lourdes Sereno as Supreme Court Chief Justice. This, despite the Constitutional provision that a Supreme Court Justice can be removed from office only through impeachment.

The other side of the bullying, or its opposite counterpart, is the shameful obsequiousness toward China, which has violated our territorial sovereignty over the West Philippine Sea despite our victory in the UN Arbitral Court. There seems to also be lots of accommodation of other alleged election supporters: Former President Gloria Arroyo, the Marcos family, the Manny Villar family, and the notoriously wealthy religious leader Apollo Quiboloy, whose fund-raising activities in the USA has run into some legal controversies. Rodrigo Duterte himself openly admitted that the plane he used during his presidential campaign was lent by his good friend Quiboloy.

Is this the way state policy is to be formulated and executed? To the victors and their supporters belong the spoils? This smacks of primitive governance, if you can call it that. Where is the consideration for the public interest, now and in the future?

It is clear to see that rather than graduate into a civilized society to which it seemed we had been moving, we are retreating backwards into a primitive society. State policy has got to be based on rational evaluation of what is in the public interest. And it helps if there is open debate on the issues to help ensure rightness and fairness of choices. Freedom of the press and a strong opposition are needed to ensure issues are debated in public toward transparency and rationality in national policy making and execution. The business community, if it cares to, has the potential to help ensure this.