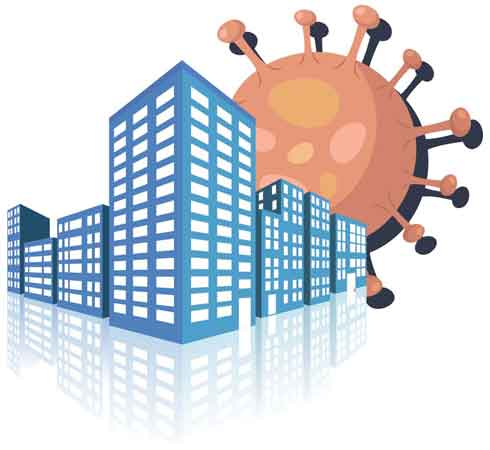 Different countries have different priorities. In the Philippines, President Rodrigo Duterte has decided to extend the Enhanced Community Quarantine (ECQ) until the end of April. This will bring the period of economic stoppage to 49 days. Clearly, the government believes that at this point, the health consequences of lifting the ECQ in Luzon and other key cities is far greater than its economic cost.

The 49-day quarantine has put the economy in a downward spiral that operates as a vicious cycle.

Second, the infectious nature of the virus sparks fear, panic, and paranoia among the consuming public. An atmosphere of uncertainty overcomes market sentiments. This leads both private citizens and businesses to hold on to their cash and beef-up their precautionary savings. Consumption of goods and services plummets as do new investments.

Third, corporate cash reserves are depleted as businesses must still pay their fixed overhead expenses like payroll and rent without the sales to back it up. This is especially true for the micro-, small-, and medium-sized enterprise (MSME) sector.

Fourth, businesses cut costs to survive. Massive lay-offs take place which results in a spike in unemployment. Assuming a third of all MSMEs go bankrupt on the back of this crisis, as many as 14.5 million of our countrymen may lose their livelihoods.

Fifth, the more unemployed people there are means less people spending on goods and service. Poor sales cause more companies to permanently close. Loan defaults surge. Poor market conditions coupled with a weakening financial system fuels the fire of uncertainty anew. Heightened uncertainty brings us back to the second point. Then the cycle repeats itself with greater intensity.

How badly has the economy been affected so far?

I find NEDA’s growth projection to be too wide in range to be meaningful.

London-based Capital Economic provides a more accurate forecast. According to the British think tank, first quarter GDP growth was approximately 4.7% while the second quarter will likely register a contraction of -3%. A recovery is foreseen in the third and fourth quarters with growth projected at 1.1% and 0.07%, respectively. This puts the whole year growth rate at 0.9%, which is in the bottom range of NEDA’s projection. This was validated by the International Monetary Fund which recently downgraded the country’s growth prospect to -0.06% for the year.

The economy is seen to contract by -4.3% if the ECQ is extended to May.

Beyond the month of May, the economy will continue to perform sluggishly unless stimulated. Fiscal stimulation is the only way the vicious cycle can be broken. How much stimulus does the economy need to restore its growth momentum to pre-COVID-19 levels?

Think of the economy as a wheel that is rolling on an even surface. Simple physics dictates that if you decelerate that wheel by 10%, you would need a force greater than 10% to get that wheel rolling at its former pace. The greater the force, the faster the recovery will be.

That “greater force” is government spending. Hence, assuming the impact of the pandemic is a reduction in gross domestic product of $38.3 billion (representing 10% of 2020’s forecasted GDP), the government must spend at least $40 billion to stimulate the economy to its pre-COVID-19 velocity.

As of this publication, Congressman Joey Salceda has proposed a stimulus package equivalent to 8.7% of GDP or roughly $33.32 billion. This is close to Thailand and Singapore’s stimulus packages which are at 9% and 12% of GDP, respectively. I am hoping that Mr. Salceda’s package will be considered by both the legislature and the executive branch.

One thing is for sure, the government’s stimulus package must prioritize MSMEs since they comprise 99.6% of all businesses operating in the country and collectively employ 66% of the workforce. If the MSME sector collapses, the entire economy will go down with it.

With the 49 day lockdown of Luzon and key cities in the Visayas and Mindanao, MSMEs are already fighting for their lives. The specter of bankruptcy faces thousands of MSMEs and only a financial lifeline from the government can save them.

A crucial part of the stimulus package should be extending financial support to credit-worthy MSMEs. Financial support should not be a token amount but substantial enough to save a company in financial distress. Business groups have recommended the equivalent of three times their monthly payroll. Extending a financial lifeline to MSMEs will save the very backbone of the economy whilst preserving millions of jobs.

Government’s stimulus package must be massive and must come immediately. Without it, the vicious cycle will repeat itself in the third quarter.

The BARMM timetable: Another COVID casualty?

Government dropped the ball in the IT-BPM industry