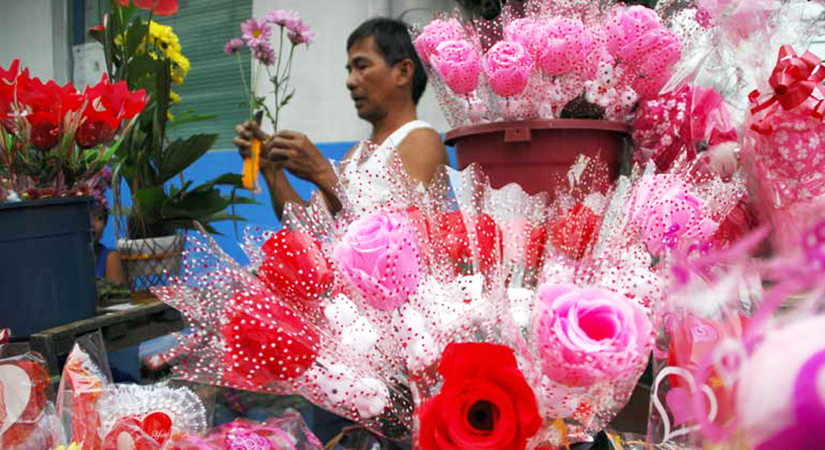 The day before Valentine’s Day, red roses were selling briskly at P5,000 per dozen/per bouquet at a small flower stand in a Makati mall. What a waste, the dumpy old widow grumbled to herself — whoever guy is giving that near-wilting bunch of flowers to his lady love would do better to give her the cash.

But that is the ritual, Tita. Have you forgotten when it was your day? Ah, yes! My office was like a funeral wake, with bouquets and bouquets of flowers on Valentine’s Day. No reflection on my attractiveness or desirability as a woman — Valentine’s Day was a safe excuse for business friends and other publics, including co-employees, to give something (flowers) without lasting monetary value to the receiver, and less likely to be perceived as “sip-sip” (a lick-ass) or bribing for favors and advantage. I would have returned them all, but I decided to raffle these off, cost-free, to my male staff, for them to give to their “Valentines.” Flowers on Valentine’s Day have become so obligatory.

“In Japan, it’s women who do the gift giving on Valentine’s Day,” a USA Today article of Feb. 13, 2016 said. Friends, family, and office workers are on the list, and the gift on Feb. 14 is traditionally a box of chocolates. The male recipients are to reciprocate, also with chocolates, on March 14, White Day, if they wanted to. Of course, most, if not all, men who receive chocolates from a woman would, out of courtesy, pay back with chocolates on White Day. The Chocolate and Cocoa Association of Japan estimates that $500 million is spent annually on chocolates for Valentine’s Day, which is less than a third of what Americans spend on candy for Feb. 14. Japanese spend another $500 million on chocolate for White Day, the USA Today write-up said.

The ritual, which is called “giri choco,” started in the 1950s and translates as “obligation chocolates.” Women in the workplace are the most shackled by this tradition, as they are expected to buy chocolates on Feb. 14 for their male co-workers, above them or below them in rank. However, growing numbers of women are snubbing the Valentine’s Day tradition, with a recent survey showing that only 35% of women said they planned to offer chocolate to their male colleagues, the majority instead opting to buy presents for loved ones and friends. “Some firms are now banning the office tradition, which is viewed by many in the country as a form of abuse of power and harassment,” the UK newspaper The Independent wrote last week.

A 2016 editorial of the Japan Times bemoaned that the 1986 equal employment opportunity law — amended in 1999 against discriminatory treatment in the recruitment, hiring, assignment, and promotion of workers for gender-based reasons — has had lackluster compliance even as Prime Minister Shinzo Abe in 2015 required businesses as well as central and local government organizations to compile and publicly disclose plans to increase women in management. Japan’s gender wage gap, at 24.5%, is third-worst among developed countries. But persistent gender attitudes and roles might support the “glass ceiling” which restricts the advancement of women: the male-centric work ethic that requires long working hours and extended male-exclusive bonding after work, vis-à-vis the “tough choice (of women) between their families and their careers,” with married working women having to voluntarily exit the work force to stay home and raise children, or single women opting to stay single to build a career among men. Sodeska! Women hold just 13% percent of managerial positions in Japan, compared with 44% in the United States. According to a recent Reuter’s poll, three-quarters of Japanese companies say they have no female senior executives. “Politics is even more of a male bastion. With women accounting for just 10% of the members in Japan’s lower house, the country ranks 161st out of 193 countries in female political representation, according to the Inter-Parliamentary Union (The New York Times, Oct. 17, 2018). Combined female representation in politics and in business, Japan ranked at the bottom of the G7 countries in 2016.

Compare the status of women workers in Japan, who comprised 43% of the labor force in 2016, with women workers comprising 49.3% of the Filipino work force, also in 2016, both according to respective national statistics. According to the Philippine Commission on Women (PCW), more than 27% of women in the labor force in 2014 held executive and supervisory positions in government and business. By the May 2016 national elections, 78.5% of elective government positions were won by women voted in by a voter turnout of 43.3 million, 80.1% of whom were women.

These numbers seem to show the higher status of women in the workforce and in society in general in the Philippines, compared to other countries. Indeed, the Philippines ranked eighth (0.799) of 149 nations in the 2018 WEF Global Gender Gap Report, higher by two notches from 10th place (0.790) in 2017, on their progress in gender parity through economic participation and opportunity, educational attainment, health and survival, and political empowerment (Sunstar, Dec. 20, 2018). The report also showed that the Philippines is the most gender-equal country in Asia.

One thing disturbs the pride of achievement in gender-equality though: there must be a social cost, particularly to the family unit, for a mother or female head of family to prioritize making a living over the unpaid services of making a home. Then we appreciate and respectfully admire “the cruel choice” between remaining single (to pursue a career among men) or having a family (and giving up a career) that the Japanese working woman is faced with. For the Filipino working woman, she would have to grapple with the same male-centric corporate and business culture of the “old boys club” that will extract from her, more effort and time at the office at the sacrifice of being home with family.

The Philippine Statistics Authority shows that the number of women Overseas Foreign Workers surpased male OFWs since 2014, growing cumulatively from 451,000 in 2000 to 1.25 million of the total 2.447 million OFWs in 2015. One percent of the 100 million Filipinos in 2015 were women aged 25-29 who flew to Hong Kong and the Middle East to take care of foreign children and the elderly. In Japan, where roughly one-fourth of the population is aging (65 years old and over), going abroad as domestic helper is not done and is not compatible with social traditions of filial love and care. Falling birthrates have left Japan with one of the world’s oldest and fastest-shrinking labor forces, and the nation is focused on strengthening the social foundations of family with planned increased births. The “giri choco” tradition on Valentine’s Day might yet help boost the “Womenomics” of Shinzo Abe that urges women to take the initiative in socioeconomic development.

On Valentine’s Day here, the Social Weather Station (SWS) came out with significant insights on love and making a living:

Three out of five, or 60%, of Filipinos said they will choose their career over their love life if they had to. Of this, 77% of men and 83% of women who never married said they would choose career over relationships. Half of married men and those living with partners would also pick their profession over their love life, while 65% percent of women with live-in partners, and 49% of those who are married would choose their career.

“By sex, 68% of men and 63% of women experienced having a successful love life and career at the same time,” SWS said.