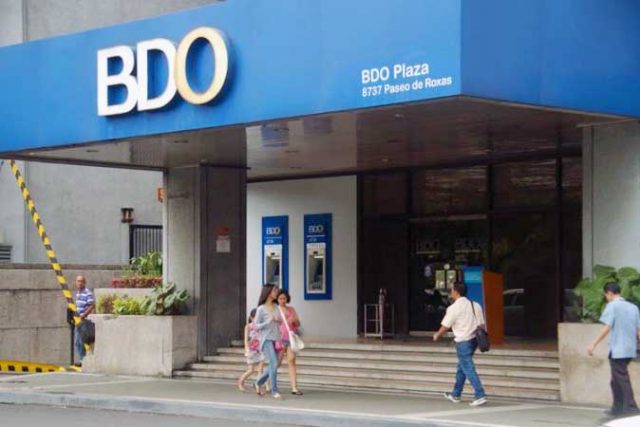 BDO UNIBANK, Inc. returned to profitability in the second quarter as it significantly reduced its provisions for credit losses, which it ramped up at the start of the coronavirus pandemic in 2020.

The bank booked a net income of P11.043 billion in the second quarter, based on its quarterly financial report released on Monday. This is a turnaround from the P4.502-billion net loss it recorded in the same period of 2020.

This brought the bank’s net income for the first semester to P21.451 billion, surging by 403% from the P4.252 billion booked a year earlier amid increased non-interest income and lower loan loss provisions, BDO said in a statement.

The bank’s net interest income in the April to June period dropped 2.9% to P32.423 billion from P33.418 billion a year earlier mainly due to lower interest income from loans and other receivables. Its net interest margin was at 4.06% in the first semester, down from 4.36% a year ago.

Meanwhile, non-interest income in the same period dipped 0.9% to P14.311 billion from P14.442 billion a year ago. This was on the back of higher gains from service charges, fees and commissions as well as insurance premiums, which helped offset a decline in trading gains.

Operating expenses increased 7% to P29.88 billion in the second quarter from P27.927 billion, mainly caused by the rise in costs related to its life insurance business.

Provisions for impairment losses declined by 80% to P3.85 billion in the second quarter from the P20.174 billion it set aside a year ago as a preemptive move against delinquencies expected amid the pandemic. This brought the bank’s credit provisions to P6.8 billion in the first semester, down by 69.6% against the P22.4 billion posted in the same period of 2020.

The bank’s loans were flat at P2.3 billion at end-June due to “sluggish demand.” Its gross nonperforming loan (NPL) ratio stood at 3.1%, which BDO said was still lower than its “worst-case” projection of 4-5%. NPL cover was at 100%.

On the other hand, total deposits with the bank inched up by 3.8% to P2.7 trillion as of June from P2.6 trillion a year ago, driven by the 13% growth in current account, savings account (CASA) deposits for a CASA ratio of 84%. Time deposits, meanwhile, dropped 14%.

BDO’s capital base was at P412.7 billion as of June. Its capital adequacy ratio was at 14.99%, up from 13.82% last year, while its common equity Tier 1 ratio stood at 13.9%, both well above the minimum regulatory requirements.

MPIC president to retire; Pangilinan to take over

Liquidity growth picks up in September