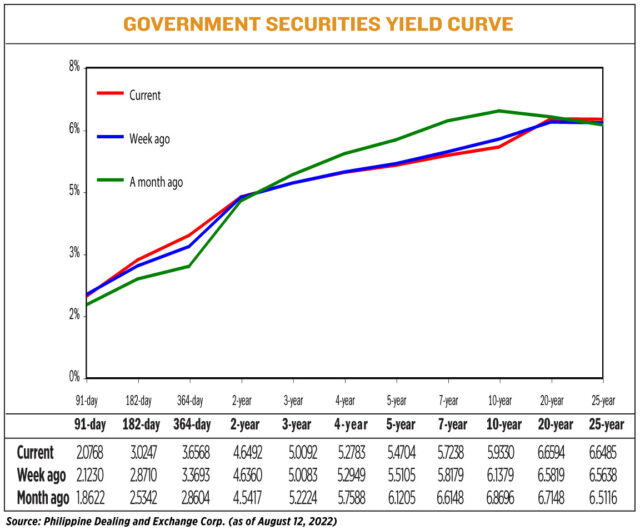 YIELDS on government securities (GS) ended mixed last week after the Treasury made a full award of its offer of reissued 10-year T-bonds and as US inflation is seen to have peaked.

Debt yields, which move opposite to prices, increased by 1.96 basis points (bps) on average week on week, based on PHP Bloomberg Valuation Service Reference Rates as of Aug. 12 published on the Philippine Dealing System’s website.

Total GS volume traded for the week increased to P8.656 billion on Friday from the P7.953 billion seen on Aug. 5.

“For the most part, given that the yields remain decent on the benchmark 7–10-year tenors, locking in yields at current levels is an attractive proposition for investors that expect some CPI (consumer price index) normalization by next year,” Mr. Liboro said.

“Yields ended the week almost unchanged from mixed signals following the upside surprise in the US labor reports and as softer US inflation reports boosted market sentiment that US inflation might have already peaked in June 2022,” a bond trader said in a separate e-mail.

“The pivotal US consumer and producer reports have recalibrated market expectations regarding future rate hikes from the Federal Reserve,” the bond trader said.

The bond trader added that while the global markets are still expecting another rate hike of 75 bps from the US central bank, future rate adjustments might become less aggressive as inflation is highly seen to decline in the coming months.

The Bureau of the Treasury (BTr) raised P35 billion as planned from its offer of reissued 10-year securities that have a remaining life of six years and five months last week as bids stood at P105.72 billion, more than thrice the amount on the auction block.

Meanwhile, the US consumer price index ended flat month on month last July from 1.3% in June. On an annual basis, inflation rose by 8.5% in July, slower than 9.1% in June.

Producer prices also declined last month on the back of lower energy costs. The producer price index for final demand declined by 0.5% last month after climbing by 1% in June. In the 12 months through July, it increased by 9.8% after rising by 11.3% in June.

Back home, preliminary data from the Philippine Statistics Authority showed gross domestic product expanded by 7.4% year on year in the second quarter, easing from the downwardly revised 8.2% print seen in the first three months of 2022 and the 12.1% expansion seen a year earlier.

For this week, the bond trader said yields may move higher amid broad expectations of at least a 25-bp rate hike from the Bangko Sentral ng Pilipinas (BSP) at its meeting on Aug. 18.

“Market will be looking towards the 10-year reissuance and the upcoming BSP meeting to determine broad direction in yields as well as overall shape of the yield curve,” Mr. Liboro said.

“If the 10-year primary market demand continues to be strong, then we anticipate further drift in yields lower. BSP will likely deliver a more hawkish stance given the still-high inflation print,” he added. “While the front end part of the curve may adjust higher, the long end will likely continue to be driven by end-user demand looking to lock in yields.” — AMPY

PhilPASS Plus to go live by June 2021