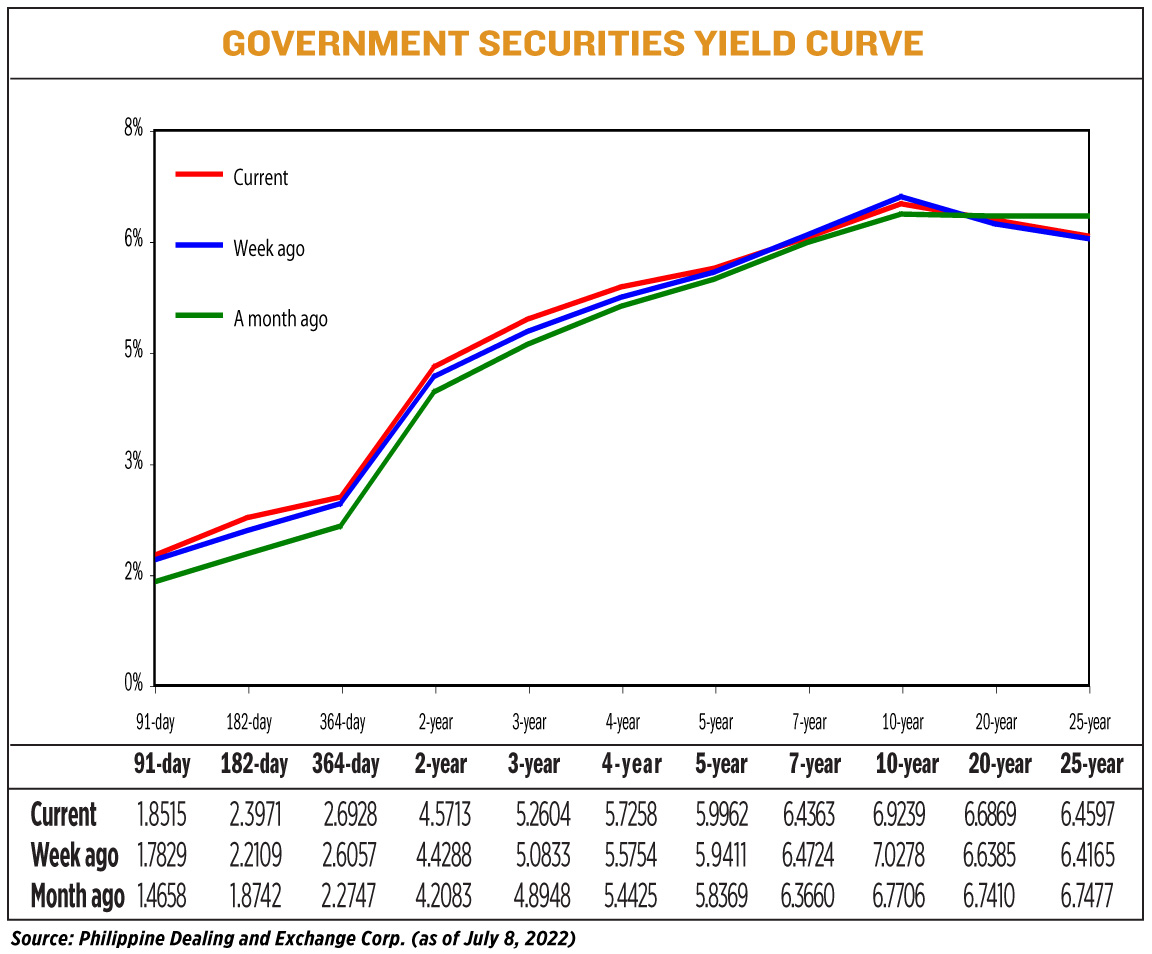 YIELDS on government securities (GS)rose last week after inflation surged to its fastest level in nearly four years in June.

GS yields, which move opposite to prices, rose by an average of 7.44 basis points (bps) week on week, based on the PHP Bloomberg Valuation (BVAL) Service Reference Rates as of July 8 published on the Philippine Dealing System’s website.

“Peso bond yields climbed week on week after the release of the June inflation data, which clocked in higher than expected,” a bond trader said in a Viber message.

“Key drivers [last] week were inflation and the four-year [bond] auction. The move higher in June inflation was significant but in-line with market expectations,” Mr. Liboro said in an e-mail.

Headline inflation quickened to a near four-year high of 6.1% year on year in June amid soaring food and transport prices. This was up from 5.4% in May and 3.7% in June last year. It was also the fastest pace since October 2018.

The June headline print brought inflation in the first half to an average of 4.4%, above the central bank’s 2–4% target but still lower than its 5% forecast for this year.

Meanwhile, on Tuesday, the Bureau of the Treasury raised P35 billion as planned from its offer of reissued seven-year T-bonds. The bonds, which have a remaining life of three years and seven months, attracted P56.236 billion in bids.

“It also looks like the US Federal Reserve will continue to be aggressive on its rate hike plans following the release of FOMC (Federal Open Market Committee) minutes that Fed officials are open to a more restrictive monetary policy stance to tame inflation,” the bond trader added.

Bangko Sentral ng Pilipinas (BSP) Governor Felipe M. Medalla last week said the central bank is prepared to raise its policy rate by 50 bps at its Monetary Board meeting on Aug. 18 as the peso hit the P56 level against the dollar on Thursday.

This week, the bond trader sees GS yields continuing to trade higher amid a lack of catalysts.

“If the 75-bp US Fed hike actually happens, the BSP’s policy rate will be on a par with that of the US Fed’s at the 2.5% level, barring any off-cycle rate hike by the BSP as its next policy rate meeting is scheduled on Aug. 18,” the trader said.

Mr. Liboro also expects rates to trend gradually higher, with the seven-year bond auction on Tuesday seen as the main driver of trading activity this week.

“Current indications project market demand in the 6.80-7% area. Given expectations that inflation has yet to hit its peak for the year and more hawkish rhetoric from the BSP recently, we expect upward pressure on rates to persist over the month. However, at the 7% area we see longer-term value on the tenor and expect decent demand at the level,” Mr. Liboro added. — Mariedel Irish U. Catilogo

Koepka survives to win PGA after crowd sense a collapse