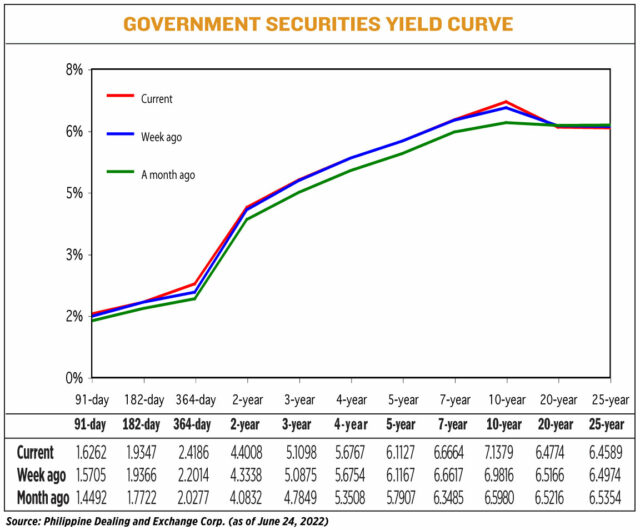 GS yields, which move opposite to prices, at the secondary market edged up by 4.01 basis points (bps) on average week on week, based on the PHP Bloomberg Valuation Service Reference Rates as of June 24 published on the Philippine Dealing System’s website.

“GS market did not move much [on Friday] as the move by BSP was communicated before the actual announcement,” a bond trader said in a Viber message.

However, concerns over the weakening peso and the risk of elevated inflation due to higher food and oil prices pushed up the long end of the curve, while the belly of the curve remained fairly flat over the week, another bond trader said.

“Aside from an expected policy rate hike from the BSP, market participants remained on watch over the monetary policy comments from various Federal Reserve officials,” the second bond trader said in an e-mail.

The BSP on Thursday hiked its key rate for the second straight meeting by another 25 bps to 2.5%, as signaled days earlier, to temper rising domestic inflation.

The rates on the overnight deposit and lending facilities were also raised by 25 bps to 2% and 3%, accordingly.

With the market hoping for a 50-bp increase from the BSP as inflation risks mount, the local currency dropped to its lowest in nearly 17 years on Friday, closing at P54.985 against the dollar, data from the Bankers Association of the Philippines showed. It was the peso’s weakest showing since it closed at P55.08 on Oct. 27, 2005.

Meanwhile, a week after hiking rates by 75 bps, which was the biggest increase since 1994, Fed Chair Jerome H. Powell told a US Congress hearing on Thursday that the US central bank is committed to bringing down inflation despite risks of a downturn, but said it is not trying to engineer a recession.

For this week, local GS yields might move sideways with an upward bias as the market expects more rate hikes from the BSP and the Fed, the second bond trader said.

“The possible uptick in the Fed’s preferred inflation in May 2022 may further fuel hawkish policy views and raise concerns over a global slowdown due to rising interest rates,” the second trader said.

The personal consumption expenditures (PCE) price index, the Fed’s preferred inflation gauge, rose by 6.3% annually in April after jumping by 6.6% in March.

Excluding the volatile food and energy components, the PCE price index increased 4.9% year on year in April after rising 5.2% in March.

Meanwhile, the first trader expects GS yields to continue moving with an upward bias this week ahead of the reissuance of seven-year papers on Tuesday and the release of the Treasury’s July domestic borrowing program.

On Tuesday, the Bureau of the Treasury will offer P35 billion in reissued seven-year debt with a remaining life of six years and 10 months. — Ana Olivia A. Tirona