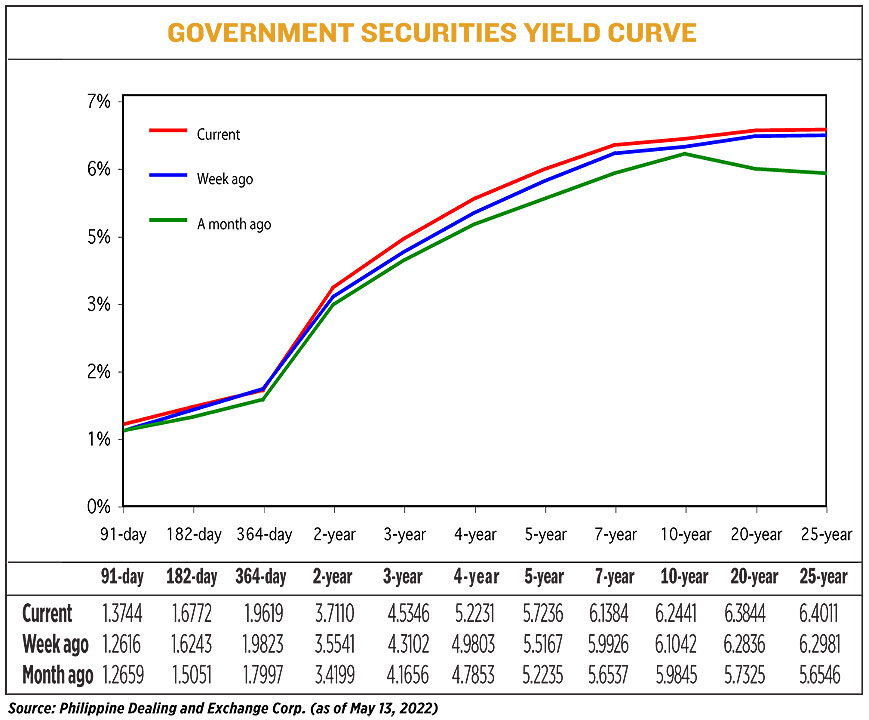 THE SELL-OFF in government securities continued last week as the better-than-expected economic print in the first quarter and rising inflation could push the Bangko Sentral ng Pilipinas (BSP) to end its easing cycle as early as this week.

Debt yields, which move opposite to prices, went up by an average of 13.33 basis points (bps) week on week, based on the PHP Bloomberg Valuation (BVAL) Service Reference Rates as of May 13 published on the Philippine Dealing System’s Website.

Yields on nearly all benchmark tenors rose across the board on Friday compared with their finish on May 6, except for 364-day papers, whose rate dipped by 2.04 bps to 1.9619%.

The bond sell-off last week was due to the hawkish US Federal Reserve, coupled with climbing domestic inflation and faster-than-expected economic growth in the first quarter, analysts said.

They said election-related volatility will be short-lived as investors wait for clarity about the next administration mandate and policies.

The first-quarter GDP print “ultimately leads to market pricing in earlier-than-expected policy tightening” by the Bangko Sentral ng Pilipinas (BSP), a bond trader said in a Viber message on Friday.

He added that the partial awarding of the reissued 10-year T-bonds auctioned off last week also affected the long end of the curve. The Bureau of the Treasury raised just P25.1 billion via the reissued papers that have a remaining life of four years and 11 months, less than the programmed P35 billion and even as the offering attracted P55.29 billion in bids. The paper fetched an average rate of 5.772%, up by 258.7 bps from the 3.185% quoted when the series was last auctioned off on June 22, 2021.

“Longer-tenors in particular adjusted higher on the back of the result, to maintain term premium against the [five-year bonds],” Mr. Liboro said.

Economic growth in the first quarter accelerated by a higher-than-expected 8.3% annually on strong household spending as lockdowns were eased, the Philippine Statistics Authority reported on Thursday.

It was a reversal from the 3.8% decline in the same period last year and faster than the 7.8% growth logged in the final three months of 2021.

The latest GDP print beat the 6.7% median estimate in a BusinessWorld poll and is within the 7-9% target growth band of the government.

It also marked the fourth consecutive quarter that the GDP stayed in the positive territory. The first quarter’s GDP growth was the highest since the 12.1% recorded in the second quarter last year.

Meanwhile, inflation surged to a 40-month high of 4.9% year on year in April due to rising food and utility prices.

It was faster than 4% the previous month and breached the central bank’s 2-4% target. It also settled near the upper limit of the 4.2-5% forecast range in April.

With faster-than-expected GDP growth seen to put upward pressure on inflation, the market is pricing in a hike by the BSP as early as its meeting on Thursday.

Analysts said the bond market will continue its defensive stance this week, which could cause yields to rise ahead of the BSP’s policy review.

The bond trader expects the BSP to start its tightening cycle with a 25-bp increase.

“The BSP previously indicated it was likely to begin policy adjustments in June. However, given the higher-than-expected inflation print and the regional trend (Malaysia raised policy rates [last] week), they may consider a preemptive move by hiking at the upcoming MB meeting by 25 bps,” Mr. Liboro added.

“Over the short-term, we expect headwinds to continue to push yields higher,” he said. — Bernadette Therese M. Gadon

Yields on gov’t securities down on safe-haven bids