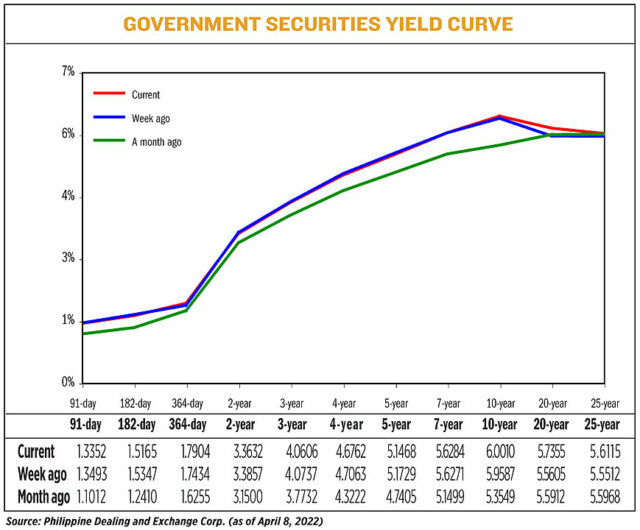 YIELDS on government securities (GS) were mixed last week after the release of March inflation data and minutes of the US Federal Reserve’s latest meeting.

“We are trapped within a range given that the inflation picture has a lag and will still rise from the 4% reported for March,” Security Bank Corp. Chief Investment Officer for Trust and Asset Management Group Noel S. Reyes said in an e-mail interview on Friday.

“Expectations remain cautious, hence most volume are for servicing client flows by traders as the latter remains under-positioned and tactically trading the curve versus client demand,” he said.

The demand was still focused on shorter maturities, Mr. Reyes added, but “green shoots could be sprouting for the longer tenors already.”

“Investors were seen repositioning in the belly of the curve, seeing interest up to the FXTN (fixed rate Treasury note) 10-67 which was yielding above 6% early in the week,” First Metro Asset Management, Inc. (FAMI) said in a separate e-mail interview, as the market have already anticipated the elevated March inflation print due to surging oil prices.

“Local bond yields have also been supported by the corporate maturities this month as well as the good turnout of BTr’s (Bureau of the Treasury) FXTN 3-27 auction which was priced at 4.25% coupon or at the lower end of the market’s indications,” FAMI said.

Headline inflation rose to six-month high of 4% in March as rising global oil prices due to the Russia’s invasion of Ukraine affected food, utilities, and transport costs, the Philippine Statistics Authority reported on Tuesday.

March’s inflation print matched the median forecast in a BusinessWorld poll and was near the upper end of the Bangko Sentral ng Pilipinas’ (BSP) 3.3-4.1% forecast for the month.

This brought the first-quarter inflation to an average of 3.4%, still within the central bank’s 2-4% target for this year and below its 2022 forecast of 4.3%.

Meanwhile, the Treasury partially awarded the freshly issued three-year papers it offered last week as investors wanted higher yields as they expect the BSP to raise its key rates by the second half of the year.

The BTr only borrowed P25.791 billion out of the P35-billion program from the fresh three-year notes even as offers totaled P53.578 billion.

The tenor fetched a coupon rate of 4.25%, 19.48 bps higher than the secondary market yield ahead of the auction. The Treasury capped bids at 4.37%.

On the other hand, minutes of the Fed’s March 15-16 meeting released last week showed it was planning to hike its rates by a more aggressive 50 bps but decided on a 25-bp increase after factoring in the Russia’s invasion of Ukraine, Reuters reported.

“We may see a respite in a further rise on the short-end of the curve,” Mr. Reyes said. “However, as inflation remains on the table, and Fed executes their hawkish position, we will remain in a range.”

“Market may destabilize given Fed’s signal to reduce its balance sheet at a maximum pace of $95 billion per month along with quick and substantial policy rate hikes in the coming months,” FAMI said.

“Faster clips of headline inflation are likely in the coming months as we see more significant pass-through effects of higher oil prices and peso depreciation,” it added. — Ana Olivia A. Tirona with Reuters