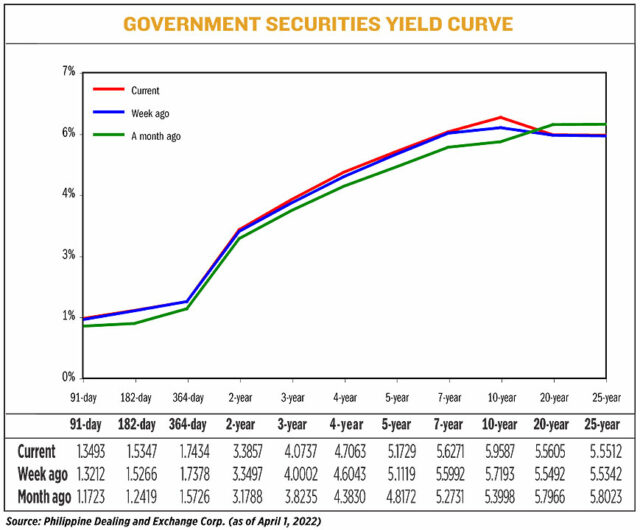 YIELDS on government securities (GS) went up across the board last week on expectations of faster inflation and potential rate hikes by various central banks.

GS yields, which move opposite to prices, went up by an average of 5.54 basis points (bps) week on week, according to the PHP Bloomberg Valuation Service Reference Rates as of April 1 published on the Philippine Dealing System’s website.

“To some extent sentiment took its cue from developments related to the conflict in Eastern Europe as well as the borrowing plan for the second quarter,” Mr. Mapa added.

“The GS market sustained its defensive ways this past week as dealers and investors are still hesitant to build up major positions in anticipation of more interest rate hikes ahead, led by the US Federal Reserve,” a bond trader said in a Viber message.

“Moreover, the rise in local yields was tempered by relatively lower global oil prices this past week,” the bond trader added.

The BSP chief has said the central bank is looking to end its pandemic-driven accommodative policy by the second half. BSP Governor Benjamin E. Diokno last week signaled the key policy rate could reach up to 2.75% by next year.

The central bank has kept its key rate untouched for the 11th straight meeting last month despite warning that its inflation target might be breached this year due to surging global oil prices brought by the Russia’s invasion of Ukraine.

On Thursday, the central bank said March inflation could breach its target amid local oil price hikes and peso depreciation.

The BSP estimated that inflation for March could settle between 3.3% to 4.1%, with the midpoint at 3.7%.

If realized, this would be faster than February’s 3% but slower than March 2021’s 4.1%. The midpoint also matched November 2021’s pace and would be the quickest pickup since the 4% print in October last year.

On Friday, global oil prices dipped ahead of a meeting of International Energy Agency member countries to discuss a release of emergency oil reserves alongside the US planned release of up to 1 million barrels of oil per day for six months, Reuters reported.

Central banks around the world have been tightening their monetary policies to temper inflation even in the face of risks to economic growth.

The Fed hiked its policy rates for the first time since 2018 by 25 bps last month to combat its surging inflation that reached a 40-year high. It signaled more aggressive hikes in the coming meetings.

Meanwhile, the Bureau of the Treasury announced on Wednesday it plans to borrow P200 billion from the domestic debt market in April, smaller than the P250 billion programmed last month. Broken down, the government targets to borrow P60 billion from its weekly T-bill auctions and P140 billion via T-bonds.

For this week, ING’s Mr. Mapa said investors are likely to get direction from the upcoming March inflation report as well as international developments.

“As for particular tenors, next week features both a bills and bond auction and we could see some action on the belly of the curve,” Mr. Mapa said.

Yields will continue to trade sideways with an upward bias this week, the bond trader said.

“The local bond market will have a full plate this week as market players gear up for the release of March CPI (consumer price index) on Tuesday and the three-year FXTN (fixed rate Treasury note) auction issuance (indicative range at 4.00% to 4.25%),” the bond trader said.

The Treasury will offer P35 billion worth of fresh three-year bonds on Tuesday.

The government borrows from local and foreign sources to help fund its budget deficit seen to hit 7.7% of the country’s economic output this year. — Lourdes O. Pilar with Reuters

Bracing for the worst