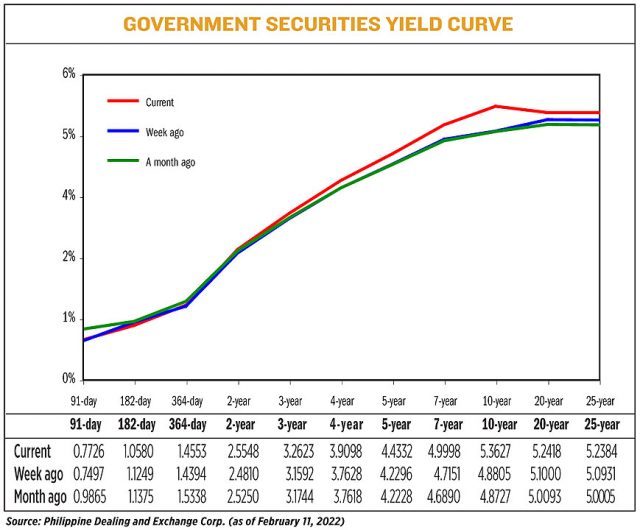 YIELDS on government securities (GS)surged last week after investors continued to price in a potentially more aggressive US Federal Reserve hike in March after the world’s largest economy reported a 40-year high inflation rate in January.

GS yields in the secondary market jumped by 14.12 basis points (bps) on average week on week, based on the PHP Bloomberg Valuation (BVAL) Service Reference Rates as of Feb. 11 published on the Philippine Dealing System’s website.

Yields, which move opposite to prices, rose across the board on Friday from their Feb. 4 close except for that on the six-month Treasury bill (T-bill), which dropped by 6.69 bps to 1.058%.

“Local GS yields skyrocketed week on week as traders and investors continued to recalibrate expectations on the number and magnitude of US Federal Reserve’s imminent rate hikes as their inflation continues to run hot,” a bond trader said in a Viber message on Friday.

“GS further sold off after the RTB (retail Treasury bond) announcement came out as the issuance may tighten liquidity,” the trader said.

“The upward movement was broadly felt at the belly and tail-end of the curve. However, short-term rates remained subdued as local participants highly expect the Bangko Sentral ng Pilipinas (BSP) to remain accommodative,” a second bond trader said in an e-mail interview.

US inflation rate peaked at 7.5% year on year in January, this was the largest annual increase in 40 years or since February 1982, Reuters reported.

This could further bolster the case for a more aggressive rate hike from the Fed in March.

Meanwhile, last week, the Bureau of the Treasury raised P35 billion as planned through the reissued 10-year papers despite average yield rising to 5.093%, tracking a sell-off in the US bond market. The tenor attracted P51.077 billion in bids.

The Treasury said on Friday it will offer this year’s first RTBs to raise at least P30 billion. The five-year bonds will be sold from Feb. 15 to 28 with a swap offer for notes maturing on March 14 and July 4. The settlement will be on March 4.

Due to the RTB offer, the Treasury canceled its scheduled auctions of seven- and 10-year T-bonds on Feb. 15 and 22.

“For the week ahead, bearish sentiment for local bonds will persist given elevated global yields and as traders gear up for the RTB offering. On that note, yields are expected to move with upward bias for the week,” the first bond trader said.

The second bond trader expects GS yields to move with an upward trend amid potentially strong US producer inflation report and hawkish cues from the January 2022 Fed policy minutes.

“However, the increase in GS yields might be limited as the BSP is broadly expected to remain dovish in its policy meeting this week,” the second bond trader added.

The BSP’s Monetary Board is scheduled to meet on Feb 17. — with Reuters