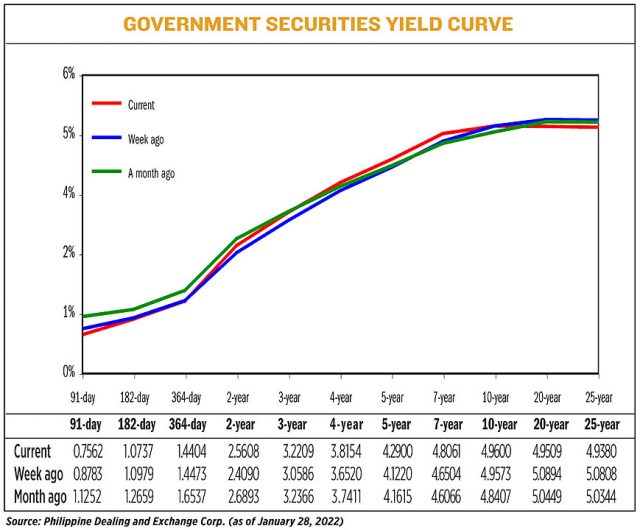 YIELDS on government securities (GS) ended mixed last week after the US Federal Reserve signaled it would raise its benchmark rates starting March.

GS yields in the secondary market increased by 3.36 basis points (bps) on average week on week, based on the PHP Bloomberg Valuation (BVAL) Service Reference Rates as of Jan. 28 published on the Philippine Dealing System’s website.

“Local rates were put under pressure as global investors began to price in more aggressive than expected policy action from the US Federal Reserve,” Mr. Liboro said in an e-mail interview.

A bond trader said rates began rising ahead of the Federal Open Market Committee (FOMC) meeting and “finally broke resistance levels when the statement was deemed more hawkish than expected,” pushing rates at the belly of the curve upwards.

“Short-end was pinned lower because investors prefer to only short bonds (the shorter, lesser risk from fluctuations), tail-end was flat due to less supply and some specific demand for yield pickup,” the bond trader said in a Viber message.

At the end of the two-day FOMC meeting on Jan. 25-26, Fed Chairman Jerome H. Powell said the US central bank was likely to begin hiking interest rates in March to tame runaway inflation, Reuters reported.

He also reaffirmed its plan to end its bond buying that month.

However, Mr. Powell said the pace of succeeding rate hikes this year remain undecided as well as how quickly the Fed will let its massive balance sheet decline.

“While we believe that a 25-bp hike from the BSP later in the year is likely, softening inflation and a bias towards supporting local growth prospects are likely to take precedence over any spillover effect from a potential Fed hiking cycle,” Mr. Liboro said.

“We expect market to remain defensive early on due to pressure from global yields. However, the possibility of another inflation print below 4% for January is likely to spur some buying interest over the short term,” he added.

For the bond trader, yields this week would most likely “trend sideways with an upward bias” targeted at the four-year bonds and “longer tenors” due to expected weekly auctions by the Bureau of the Treasury (BTr).

The BTr will offer on Tuesday P35 billion in reissued five-year papers with a remaining life of four years and two months.

Serums are bestsellers at Kiehl’s