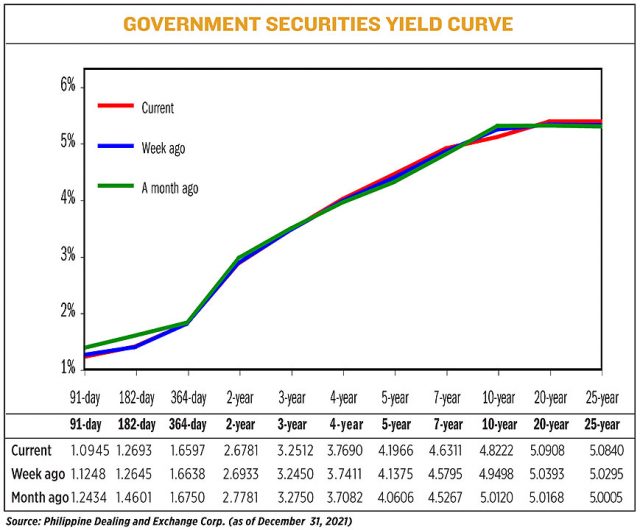 YIELDS on government securities (GS) moved sideways last week due to the lack of local catalysts, as expected by market analysts.

On average week on week, GS yields in the secondary market inched up by 0.71 basis point (bp), based on the PHP Bloomberg Valuation (BVAL) Service Reference Rates as of Dec. 31 published on the Philippine Dealing System’s website.

“Yields traded sideways amid seasonally subdued trading activity at the close of the year coupled with the lack of any local catalysts,” First Metro Asset Management, Inc. (FAMI) said in an e-mail interview on Friday.

“Most players opted to remain on the sidelines and have deployed excess funds largely on short-dated securities due to overall thin liquidity and looming uncertainties as we crossover 2022,” it added.

“With government expenditures still outpacing revenues due to the pandemic, the government will likely remain aggressive in borrowing funds from the debt market,” he added.

For this week, all eyes will be on the December inflation print, which is scheduled to be released on Jan. 5.

The Bangko Sentral ng Pilipinas (BSP) said inflation last month was likely within the 3.5% to 4.3% range.

Monthly headline inflation exceeded the BSP’s target in 2021, except in July when it stood at 4%. This was mainly attributed to food supply issues. Inflation year to date is at 4.5%, which is still above the central bank’s 4.4% forecast for the year.

Yields might continue to consolidate this week as market will keep an eye on food price shocks brought by Typhoon Odette (international name: Rai) in the Visayas and Mindanao and new debt supply risk in 2022, FAMI said.

“Investors will likely wait for better entry levels for belly to long-dated bonds as upcoming supply could render a steeper curve in the coming days,” FAMI said. — Ana Olivia A. Tirona

PNB seeks to double return on equity in 3 years