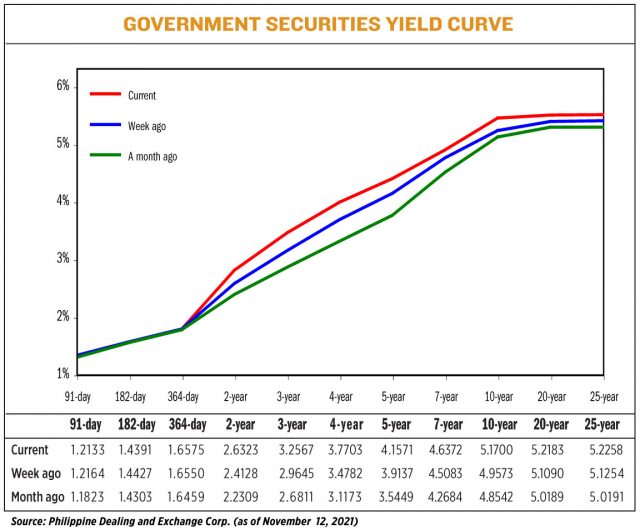 YIELDS on government securities went up last week ahead of the government’s offering of retail Treasury bonds (RTBs), which will start on Tuesday.

Debt yields, which move opposite to prices, went up by an average of 14.49 basis points (bps) week on week, based on the PHP Bloomberg Valuation (BVAL) Service Reference Rates as of Nov. 12 published on the Philippine Dealing System’s website.

The bond offer will be formally launched on Nov. 16 and follows the government’s first onshore retail dollar bond issue that raised $1.6 billion in September, helping boost funding for government programs to support the economy’s recovery.

The BTr will suspend the auction of five-year and seven-year Treasury bonds on Nov. 16 and 23 to give way for the offering.

The Treasury is offering these bonds targeted for small investors that want low-risk, higher-yielding savings instruments backed by the National Government.

Meanwhile, after raising P15 billion via the short-dated T-bills on Monday as programmed, the Treasury likewise fully awarded the reissued T-bonds it offered on Tuesday. The offer attracted P55.37 billion in tenders, lower than the P73.59 billion in bids seen when the bond series was last auctioned off on Sept. 28.

The average yield on the reissued 10-year bonds jumped by 44.1 bps to 5.13% on Tuesday from the 4.689% fetched during the previous offering.

On the other hand, the country’s gross domestic product rose by 7.1% year on year in the July to September period, turning around from the 11.6% decline a year earlier but slower than the 12% annual expansion in the second quarter due to the strict lockdown in August amid a surge in cases.

For this week, the biggest lead for the bond market will be the Treasury’s RTB offer.

“Market will remain defensive and better sellers especially in the belly securities as the BTr is set to launch their RTB offering which coupon is yet to be determined,” FAMI said.

“The immediate market catalyst will be the pricing of the 5.5-year retail Treasury bond [this] week. Yields have already adjusted sharply higher in anticipation of the issuance,” ATRAM Trust Corp. Head of Fixed Income Jose Miguel B. Liboro said in an e-mail.

“The RTB’s pricing, and expected subsequent demand, will set the tone for trading over the next few weeks as we approach yearend and the seasonal reduction of trading activity as financial institutions wind down,” he added. — Jenina P. Ibañez